People often do a double take when I tell them that Charles Schulz is one of my influences as an artist.  His strip PEANUTS, which spawned the wildly popular Charlie Brown cartoons, reveals Schulz's mastery of economy, something I always appreciate in great artists.
One of my favorite PEANUTS characters, the resident wild child Peppermint Patty, is celebrating a birthday today.


Peppermint Patty made her first appearance in the PEANUTS comic strip 55 years ago on August 22nd, 1966. 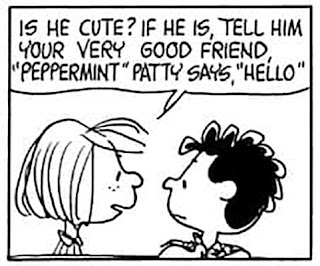 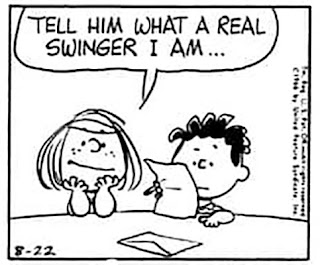 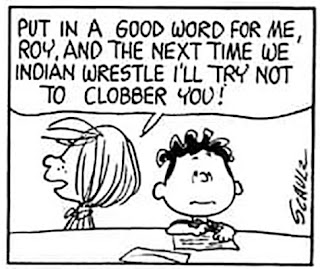 First of all, I am surprised that in her first strip, Patty is trying to spit at Linus (sight unseen), not Charlie Brown.  We all know Patty's mild infatuation with "Chuck" is the stuff of legend.  She is persistent, but never forceful. I love that about her.
Also, I love that she makes her debut with Roy, a much lesser known character who had debuted the year before.  Roy functions as Peppermint Patty's bestie for a short time, until he is replaced by Marcie, another fan-favorite.

Although comic books, particularly superhero comics, dominated my reading as a child, I have always had a soft spot for comic strips.  As I became a "serious" reader of grim and violent comics as a teenager, fun and silly comic strips were more of a guilty pleasure.  Of all the strips I enjoyed, Schulz's pudgy crumb-snatchers were never challenged for favorite status.
I don't think I have ever read a "new" PEANUTS strip.  But I'm grateful that Schulz's melancholy PEANUTS strips were popular enough to make it to me via newspaper reprints, trade collections, and (of course) cartoons.
Happy 55th Birthday, Peppermint Patty!
(((airhorn)))

Samax Amen is proud to present his book #FreelancingFAIL, a series of articles, comic strips, and illustrations about the common mindsets and habits that hold artists, writers, and other freelancers back.  More importantly, in this 70+ page e-book, Samax shows you how to overcome them and thrive!
Full color
Instant Download
ON SALE - $4.99