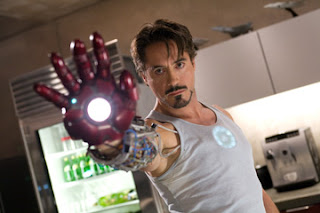 I just wanted to say that... so anyways, production has begun on Iron Man starring Robert Downey Jr as the alcoholic Avenger. in case you haven't seen any, here are some pics from the set. before you get all fired up, keep in mind ol' Shellhead won't hit screens until may 2008.

if there was ANY justice in the world, Wu-Tang Clan's brightest shining emcee Ghostface would be on the soundtrack, but this is marvel (no Method Man aka Johnny Blaze aka Johnny Storm on ghost rider or FF) so i won't hold my breath... anyhow, the film's director Jon Favreau is at comicon (i couldn't make it... sniff) this week. if you're there (why are you on my blog?), go check him out and tell 'im i said whassup... 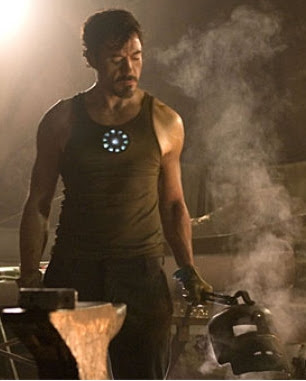 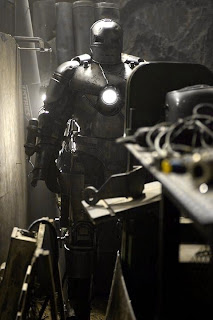 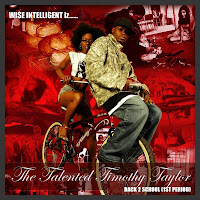 in case you didn't know, Wise Intelligent from the legendary Jersey crew PoorRighteous Teachers has a new record out called The Talented Timothy Taylor, Back 2 School... and i'm sure it'll be good (i already like cuts Bam Bam, I'm Him, and The Genocide), but until i get my next check and cop it, i'm bumpin' the new OH NO-produced cut Set U Free.
as usual, wise spits knowledge on some angry educated black man ish... over one'a them crazy indie rap beats. so far it seems Wise is goin' for the something for everybody style of album production, with mainstream, reggae-styled, and now indie wild-out beats all in the brew...
can't wait to hear the record, till then i'll bump the track, and you can too...
DOWNLOAD IT, FREE!
holla...
samax.
www.ghettoManga.com
comics. hipHop. news. art. culture.
edited by Samax @ 12:41 PM No comments:

"One Mic" by nas, from Stillmatic. directed by Chris Robinson

one of the illest Rap Videos ever, "One Mic" represents Nas at his best. this joint's a mixture of raw (sometimes incomprehensible) lyricism, optimistic pseudo-religious proclamations, and revolution-inspiring gun-talk. in fact, the lyrics on the clean mtv version were even HARDER! and besides all that, Robinson throws together one'a the illest treatments i know of, with the the African uprising, Nas' one mic tee shirt (if you know where i can cop that tee, get at me...), and "I Am Tiger Woods" snippets of diverse people mouthin' the lyrics... one of nas' best joints ever...

here's a new ghettoManga banner i made today for a webblogging site...
fans of Champion of Children will recognize the drawing i did of series star Li'l Madd Skillz.
holla!
samax
edited by Samax @ 4:10 PM No comments:

Email ThisBlogThis!Share to TwitterShare to FacebookShare to Pinterest
Read More About: art, champion of children, for kids, samax

ghettoManga Award-winning Comedian of the Year (2006) Dave Chappelle was in the Hospital for exhaustion. more details in the video...
prominent hipHop blogger, FloDirt has written a nice review of the new DVD collecting The Best of Chappelle's Show here. a comedian whose work embodies a frank, candid, unpretencious view of our world in all it's rediculousness, Chappelle is arguably the second-coming of Richard Pryor... so i, for one, am glad he's okay.
holla!
samax.
www.ghettoManga.com
comics, hipHop, news, art, culture
edited by Samax @ 3:21 PM No comments:

attention parents: this mess is not for kids.
i KNOW it's a cartoon. just TRUST ME on this...
i promise, it's not from Class of 3000. i don't know where it IS from, but it's NOT from cartoon network... well, it could'a been on adult Swim... but even if it was, your kids STILL shouldn't be watchin' it!

or maybe they should. the message is there, just, y'know... with lotsa cussin' an' stuff...

anyways, thanks to my friend Camisha J (i don't know if she reads this blog anymore... if so HOLLA!) for sharin' this with me... i laughed my face off!

it's Official. as of right now, Pharoahe Monch is my favorite emcee...
i mean, not only does he write/spit the rhymes, produce the beat, and sing lead vocals for the hook on "Push" (from his new frisbee: Desire, in stores now kids!), but he rocks one hell of a mean Afro in the video!

this song is apparently on the soundtrack to NBA Homecourt (of course with the anti-Bush comment, reference to DVD bootleggin', and cuss words zigga'd out) because of his props to Manu from the Spurs...
anywho, i bow down to a true player, mon ami!
recognize the skills...


it don't get much better than that!
holla!
samax.
www.ghettoManga.com
comics hip hop news art culture
edited by Samax @ 2:06 PM No comments:

feelin Pay-triotic?
if so, cop merch based off the new iteration of Gorgeous Destroyer i did on July 4th.
that's right soldier! "Gorgeous Destroyer: America" is available in the Ziontific store. as normal, you can cop tee shirts, coffee mugs, posters, and other assorted swag... we both know that disposable income of yours is burnin' a hole in your pocket! so pass on the mass-market mall stuff (just this once) and cop something that will get your people talkin'!
holla!
samax.
www.ghettoManga.com
edited by Samax @ 2:03 PM No comments:

Perhaps now corporate radio, MTV, BET and the other assorted hydra-heads of that thing we refer to affectionately as "The Industry" will finally recognize what niggas in the hipHop underground have been insisting for over eight years:

Pharoahe Monch is the muthaF*#kin' man.

i copped the Mighty Pharoahe's new plate Desire- the LOOOOOOOOONG awaited follow-up to the unrealisticly dope, yet slept-on Internal Affairs- on June 26th, when it finally dropped after several push-backs... and this record was well worth the eight years time that has elapsed since his last full length. Pharoahe opens the record with a short gospel acapella quartet piece that states simply:
"oh-oh Freedom.
oh-oh Freedom.
oh-oh Freedom, for me.
and Before I'll Be a Slave/
i'll be buried in my grave/
and go home, to my God
and be free."
this unusual intro marks the spirit of "Desire": Revolutionary Artistic Freedom at any and all costs. it's this idea in fact, that explains Pharoahe Monch's absence from the forefront of hip hop since he helped put Rawkus Records on the map (my map, anyways). he's spent most of that time arm-wrestling his way out of an oppressive record contract. an artists' artist, Monch has since 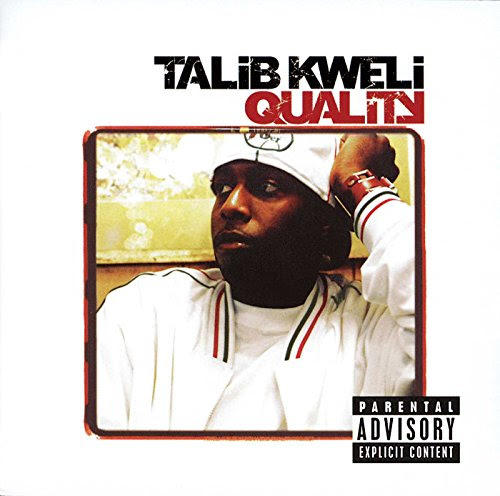 guested on various projects, solo and alongside rap luminaries like Mos Def, Kweli, Common, Kanye, and the Roots' Black Thought (click here to check out Pharoahe's verse on Guerilla Monsoon Rap from Kweli's record "Quality"). His rapid-fire delivery is ripped off so frequently that first time listeners will find themselves right at home with Pharoahe, whose style will be familiar if his name is not. in fact, Pharoahe has probably penned lyrics you bopped to, since he's a frequent go-to guy as a ghost writer...
in all fairness, i cannot review the record yet; although it hasn't left my ceedee player since i bought it, i can't get past the first half of the record. the intro alone could hold my attention for a minute, but it leads into "Free", the title track "Desire", and "Push"...then there's topical imaginative cuts like "What It Is" and "When The Gun Draws"... and did i mention there's a cover of Public Enemy's "Welcome To The Terrordome"? my favorite song right now is
"Let's Go":

sigh. that review may never get written.
please cop it, people! hip hop NEEDS this!

as for me, i already got it...
peace.
samax.
www.ghettoManga.com
comics hiphop news art culture
edited by Samax @ 12:54 PM No comments:

Cuando amor no es locura, no es amor.
(When love is not madness, it is not love.)
-anonymous (stolen from here)

One Shall Stand, One Shall Fall...

as unbelievable as it seems, they were able to turn the most beloved cartoon of my childhood into a live action/cgi feature film that had the same playful-then serious-then playful spirit of the original! in this case, "They" were producer Steven Spielberg and director Michael Bay (Armageddon, The Rock, Bad Boys), and "They" knocked it outta the park like dave justice. 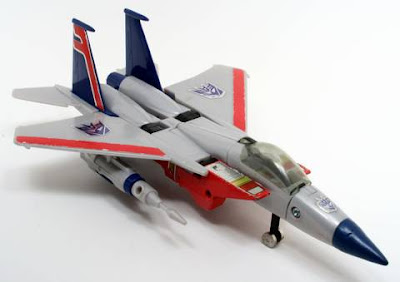 for those who have no idea what i'm talking about (PHILLISTINES!), Transformers is the story of intelligent, shapeshifting robots from the planet Cybertron, crash-landed on Earth, embroilled in a centuries-long war, the outcome of which will determine the fate of the galaxy! There were the good, peaceful Autobots, and the evil, 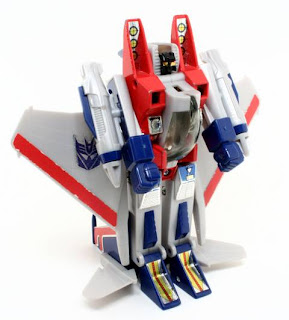 conquering Decepticons. like many concepts in movies today, Transformers had its humble beginnings in the pop paradise of the 1980's, first as a line of SWEET toys (like my favorite transformer, Starscream, seen here!) then as a series of blockbuster cartoon shows and comics.

of course, i wouldn't be much of a blogger if failed to mention the original big-screen appearance of the Robots In Disguise: 1986 animated smash Transformers: The Movie, starring such notable actors as Leonard Nimoy (Star Trek) as Galvetron (the ressurection of Megatron) and Orson Wells as the planet eating archvillain, Unicron. the film's mashing of pseudo-religious themes and colorful cast of new robots set against the thrusting of the cartoon into the future (2005 was the future back then, family!) helped make it an instant classic among faithful Transformers fans. the film shocked thousands (maybe millions) of young fans with an unpredictable and unbelievable plot twist: the brutally violent deaths of many popular characters (including fan-favorite Autobot leader Optimus Prime, below) in the first Act! i saw T:TM in the theater (rare for me as a child), and the audience was in saddened shock when Prime's light went out. Initially panned by critics and a financial disappointment, T:TM is now considered by some (including me) one of the best animated films ever made. 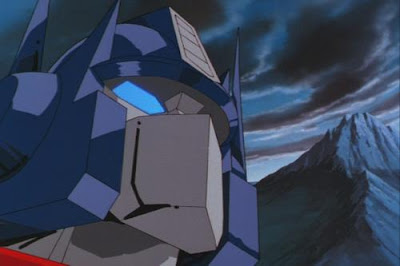 there is no need for new Transformers fans to see the cartoon show or film to get and appreciate the new Transformers film, which is packed with metric tons of action, effects, and laughs. "Good, ignorant fun!" as we like to say. while i wouldn't worry about taking kids to see it, Transformers is definately aimed at my generation: eighties kids that may have outgrown the chasing of new toys and other products associated with this franchise, but many of whom now have children that will serve as a conveniant excuse to dive back in. the PG-13 rating will bother a few parents, but the minimal references to sexual subjects, occasional cussing, and glorious abundance of cartoon violence won't bother most parents.
in short, a great, great flick. i will let the purists debate the changes in plot and characters. any problems i had with the movie were minimal. i'd say overall, it was big fun! 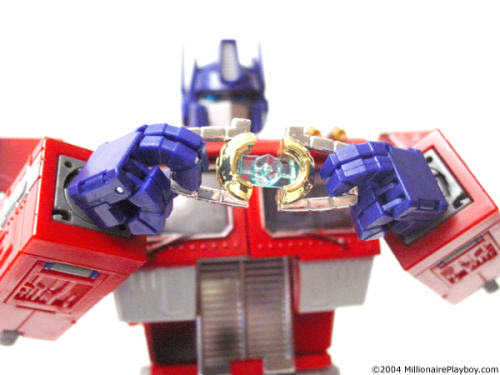