SANCT is for the babies... 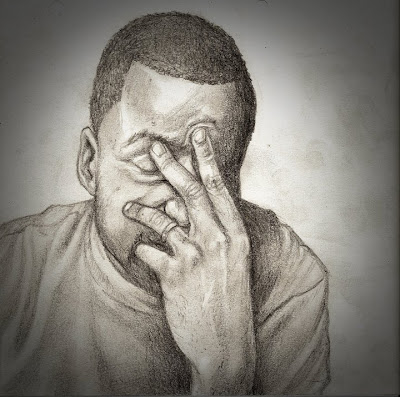 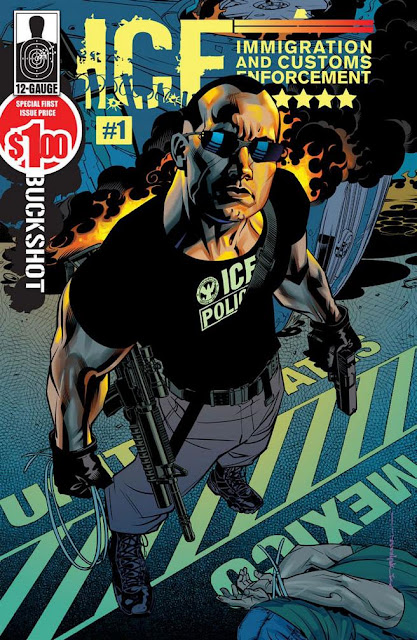 Every book from 12 Gauge Comics has that "comics as action movie" feel. I don't mean that in a bad way or anything... One way to expand the audience of comics would be to try to pull in fans of the highly popular action movie genre. For all I know, every 12 Gauge Comics project is just a movie pitch in disguise. I got no problem with that, as long as they're good comics. This comic I.C.E. (Immigration and Customs Enforcement) by Doug Wagner and Jose Holder (and Brian Stelfreeze on cover art) looks pretty good. Peep some preview pages from #3 and #4... 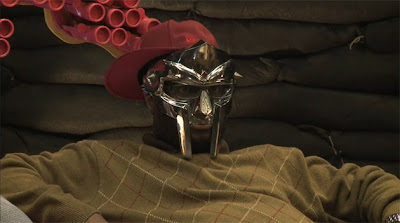 MF DOOM is one of my favorite emcees. I was not immediately struck by him when I first heard his music, nor do I have some AHA moment to point to when I finally "got it"... The art of what DOOM stands for has just grown on me over time. The light bulb did not come on all at once like a switch being thrown. For me, the light of DOOM is on a dimmer switch, getting brighter with time. Anyways, here's an awesome interview/ lecture the villain did at the Red Bull Music Academy in 2011 (I think). I've been watching snippets here and there, but I finally watched the whole thing...

PREVIEW- Defenders #6 (mostly because Misty Knight's on the cover...) 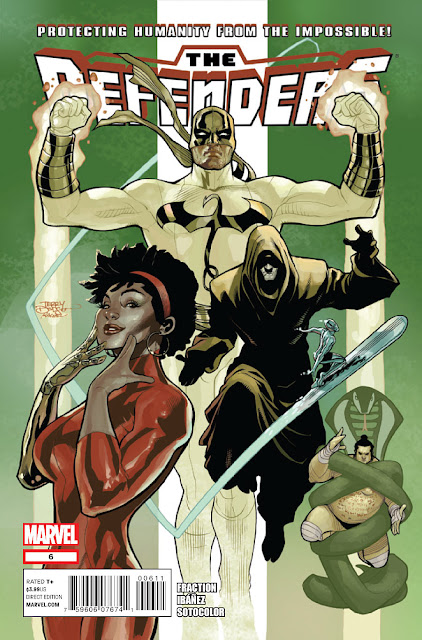 I like all the characters in The Defenders, but for some reason, putting them all on one team under that moniker almost guarantees the book will be super-lame. I know there is a legion of people who love the kooky Defenders stories of times past, AND I see that the book is written by The Immortal Iron Fist

scribe Matt Fraction, but that doesn't get my hopes up either. On the other hand, Misty Knight's on the cover of this one, so... 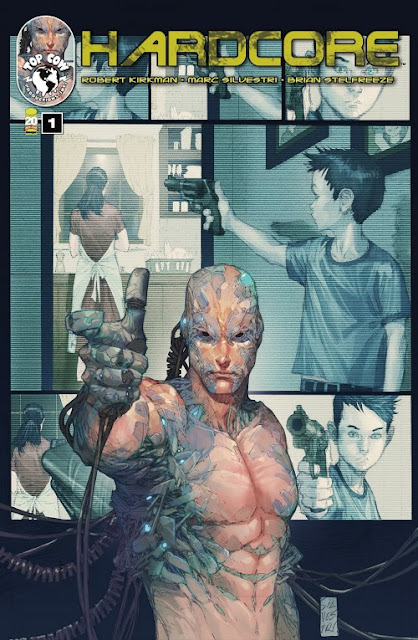 HOLY CRAP! This is freakin' HARDBODY*!!! And I would say that even if it WASN'T written by Robert Kirkman and drawn by Brian Stelfreeze (but it is, and that makes it even more so!). The Silvestri cover doesn't suck either...

As if I needed another reason to love Vast Aire, it looks like the Can Ox/LXG front man is creating comicbook characters now... Issues 8 & 9 of the Canadian hip hop caper Song of Songs the Comicbook feature the foul-mouthed, gun-toting mini-thug Carlos the Midget, created by Vast Aire...

I'm letting you know now so you have plenty of time: the flash-based fantasy joint Goblyn by Solomon Mars is probably my favorite webcomic, and he's just launched a Kickstarter campaign to get up the bread to print the first couple volumes. This is your chance to get down with something fun and original by a talented young visionary, so don't say nobody let you in on it...

"But expect it to be at a cost. To be sold, not told. The age old protocol of a boss..." -Nesby Phips (via @SkiBeatz) 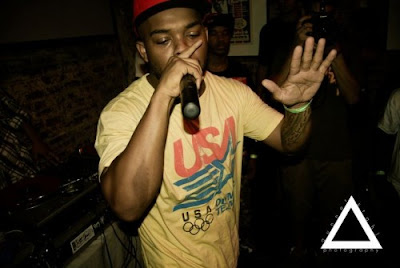 Nothing much to say here. That dude Ski Beatz dropped this hot jazz rap track Blue and Green on youTube. A tribute to the late great musical genius, Miles Davis... 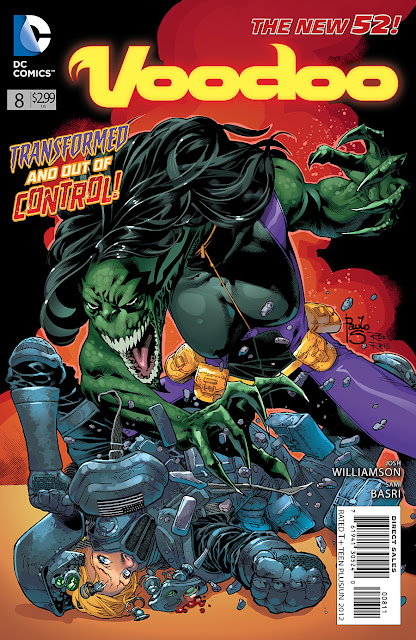 "She said WHAT?! I will scratch that bitch eyes out..."

#KickstartThis- "Antler Boy and Other Stories" by Jake Parker 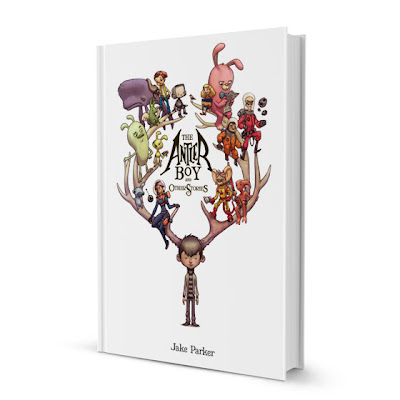 My Kickstarter addiction continues to deepen... I'm not made out of money or anything, but I get a kick (no pun intended) out of backing Kickstarter projects. I realize however that I can't afford to back 'em all, so I was gonna pump the brakes... Then I saw THIS today...
Damn you, Jake Parker... DAMN YOOOOOOOOUUUU!!!

#BegBorrowSteal- "State of the Art" by Honors English 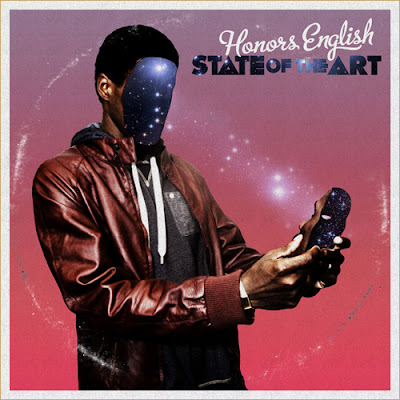 guest post by Adofo aka Wolf Windblade
For years I've been saying that Hip Hop is old enough for a discourse between artists that should resemble the highly literate music diction of Jazz greats and enthusiasts.
Hip Hop is now officially a Senior and can become an Elder IF we had more artists who, yes, acknowledge it's poverty stricken street origins but also do the math in intellectualizing and analyzing it: not only as a social phenomenon but as a craft... as ART. I think I found a cat who'll frontier that cause explicably, in practice and in form.
This upgraded approach could easily be called HONEST-E... 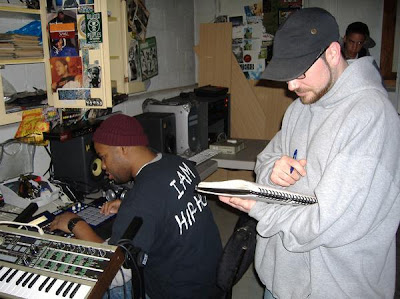 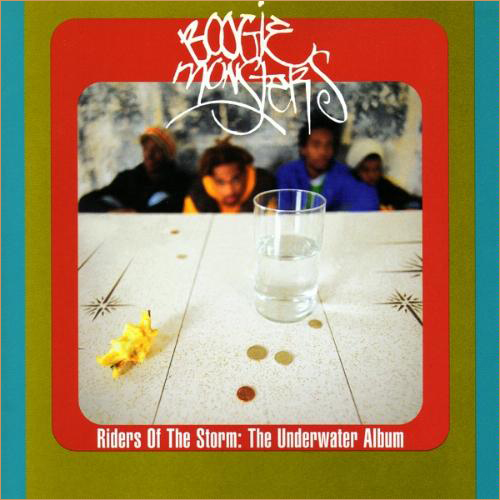 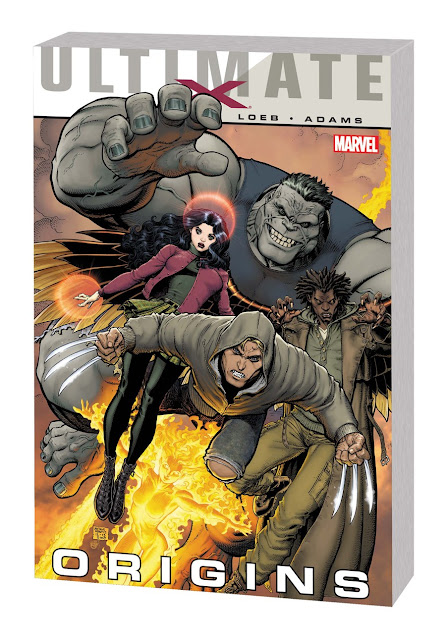 The Ultimate X: Origins graphic novel is a must buy for superhero fans. I’ll try to quickly (har) break down why and then leave the rest to your good senses. 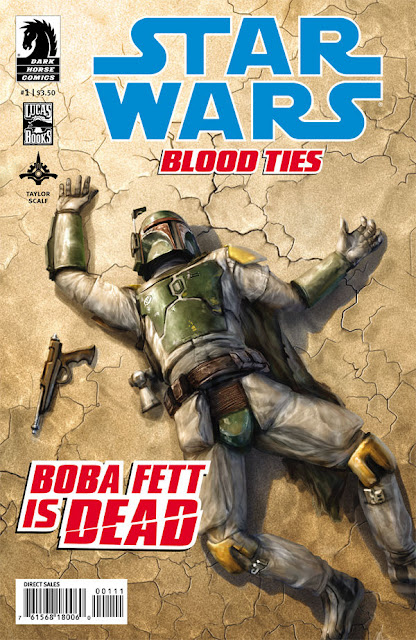 I was never much of a Star Wars fan... but I CUTS for Boba Fett, son (That helmet is the ILLEST!)! Looks like my dude caught a bad one... But this is issue one, so maybe he will come back from the dead? Yeah, I'm in full-blown denial, buddy!

Avengers VS Wolverine VS X-men? #screamPhoenix 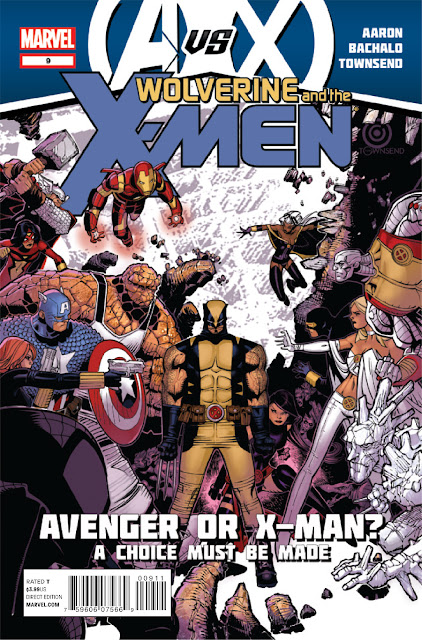 When I started reading comics, Jean Grey was already dead, a casualty of The Dark Phoenix Saga, probably the greatest X-men story ever. Professor X was headmaster of Xavier's School for Gifted Youngsters. Wolverine was the X-men's resident hothead. These days, Jean is dead (again) and Wolverine is headmaster of the Jean Grey School for Higher Learning, as well as being on the Avengers. Now, the Phoenix is back, and the Avengers are knocking on Wolverine's door on some "Who you WIT'?" type isht... 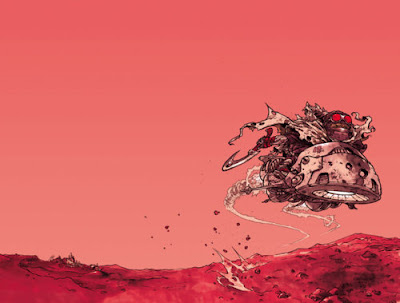 I was speechless when one of my friends recently said that he didn't like the art on the newly resurrected Liefeld superchick comic Glory (which, for a chatterbox like me, is saying a lot).  Every man is entitled to his own opinion, I guess. I will just like it enough for both of us... 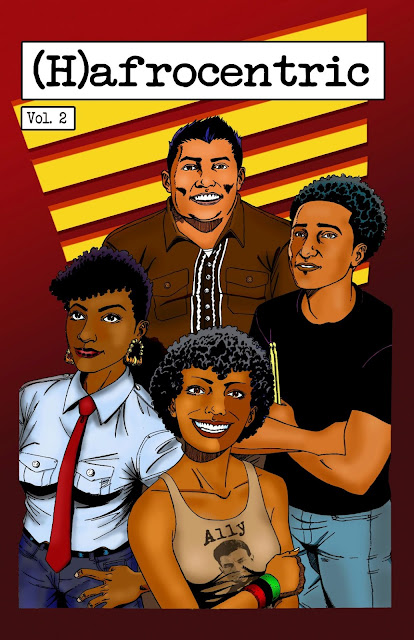 My dude Tres recently told me about this comic (H)afrocentric by Juliana Smith and illustrator Ronald R. Nelson.

continue reading »
edited by Samax @ 9:52 AM No comments: 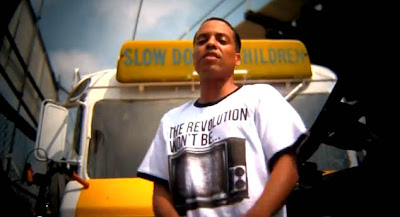 continue reading »
edited by Samax @ 8:44 AM No comments: 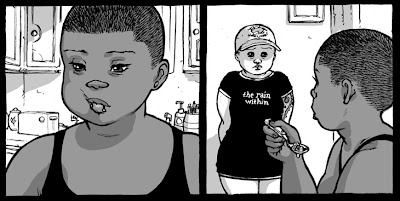 To make up for the delayed release of the sixth volume of his girl-infested slice-of-life(ish) graphic novel series Wet Moon, Ross Campbell is leaking pages periodically on his blog, but if this preview will give away the cliffhanger ending of volume 5, so don't cry to me about spoilers if you decide (of your own free will to peep the preview below!

I'm Famous #10: me and Corance interviewed by KungFuJackKnife dot com 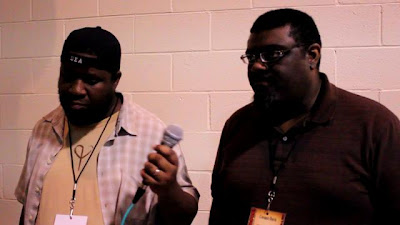 Not tryin'a brag or anything, but since I'm FAMOUS and stuff, you pro'lly wanna peep this innerview from when the fine folks at KungFuJackKnife dot com ran up on me and my loyal manservant Corance at STAPLE! Indie Media Expo back in March... 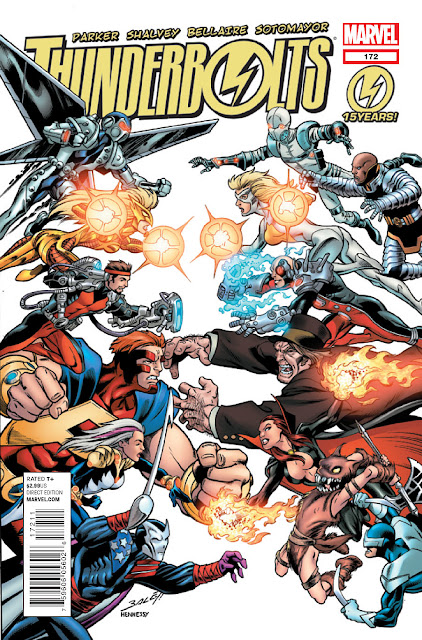 After being crazy excited about Luke Cage running the team, I lost track of Thunderbolts for the most part once it looked like he would be taking a diminished role. Of course, I'm sure it's still dope... Jake Parker is a great writer! Anyways, looks like the time-traveling T-bolts are going up against the earlier incarnation that started it all... They even got creator/artist Mark Bagley out of mothballs to draw the cover!

continue reading »
edited by Samax @ 9:28 AM No comments: 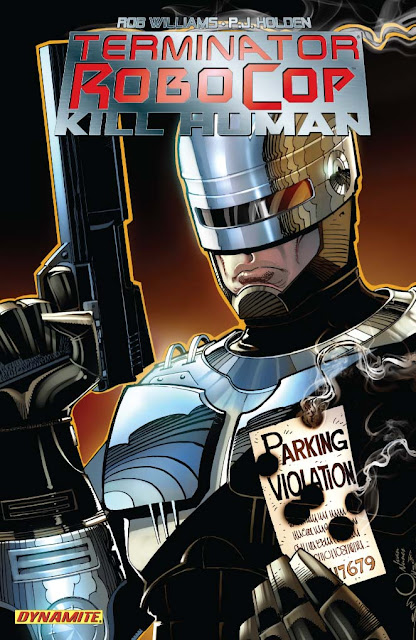 Full Disclosure: I'm a huge fan of Walt Simonson, so I decided to post this preview of the Terminator/Robocop: Kill Human trade way before I saw that he only drew the cover... but since I figured this book would probably reenforce my robophobic beliefs, I decided it was only right...

Here's a new drawing of one of my favorite emcees, the mighty Vast Aire. I drew it with Adobe Illustrator. I was joking around with my friend Adofo geeking out on looney Vast Aire lyrics and decided I needed to channel that energy into some art...