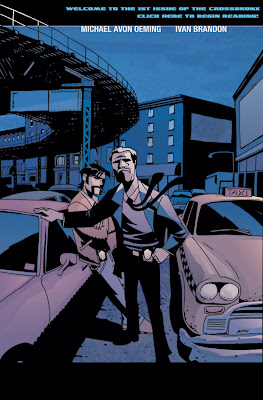 Email ThisBlogThis!Share to TwitterShare to FacebookShare to Pinterest
Read More About: comics, Oeming

legendary Golden Age giant of american animation, Joseph R. Barbera passed away this Monday. Initial reports say of natural causes. He was 95 years old and is survived by his wife, Sheryl, and three children; Jayne, Neal and Lynn. As half of Hanna-Barbera, he created (or presieded over the creation of) many household-name cartoon characters (Thundar the Barbarian, The Herculoids, Space Ghost, Tom & Jerry). you can catch a great article about his life at newsarama.

Email ThisBlogThis!Share to TwitterShare to FacebookShare to Pinterest
Read More About: newz, RIP

Dreaming of a Metal Faced Christmas? 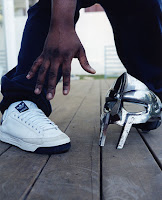 indie rap luminary M.F. DOOM has a special holiday treat for you all. Christmas Eve from 10PM to 6AM the supervillain will be hosting Adult Swim on Cartoon Network. As the masked half of Madvillain explained in the teaser commercials, "Why spend Christmas Eve waiting for some extra fat white dude to come busting through the ceiling, when you can spend Christmas eve with yours truly, DOOM". DOOM will be basically talking in between shows, giving his thoughts on the holiday happenings, and spreading holiday cheer to all who indulge... (more DOOM news)
edited by Samax @ 10:29 PM No comments:

Email ThisBlogThis!Share to TwitterShare to FacebookShare to Pinterest
Read More About: hiphop 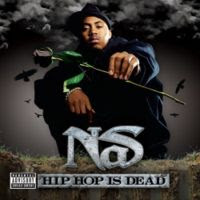 okay, so i was reading the Davey D blog post about rap juggernaut Nas' new plate Hip Hop Is Dead which also discussed whether or not hip hop is, in fact, dead... so this is my response. my opinion on the issue is pretty adamant (as you'll see), but please feel free to respond...

"this record is fresh, but hip hop is not dead, dying, or whatever. it's popular right now for people spoiled by easy-access to good hip hop videos and music to say it is.
so, as usual, it takes a couple years for some mainstream cat to say what underground niggas have been sayin' all along... and now that nas and jay-z are saying hip hop is dead, i'm gonna hafta have this conversation (again...) with late comers... this is really all just proof that hip hop isn't dead...

on the other hand, some things are dead that make you FEEL like hip hop is dead:

YO! MTV RAPS IS DEAD: and with it, the movement for fair, balanced, varied

representation of what's happening in hip hop. now with multimillion dollar videos, payola, and other assorted CORPORATE crap influencing rap shows, the possibility of a show like it (and the once-great competitor, Rap City) that really programs based on a love for hip hop, not the mighty dollar, is dead.

RADIO IS DEAD: but that's like saying "concrete is

dead"... if you are depending on CORPORATE- controlled radio to tell you what's going on in hip hop, not only are you stupid, you're also lazy, and hopelessly out of touch. if you are one of the lucky few that live in a city where your radio stations are run by people who truly love the culture and care about promoting good music, you probably KNOW hip hop isn't dead. the rest of us just need to stop listening to the radio. now, i hear there is some hope in the form of satellite radio, but i refuse to pay for radio... the internet does the job just fine for me...

BIGGIE AND TUPAC ARE DEAD: so stop trying to crown somebody "king of 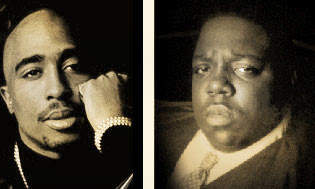 hip hop", "the south" "new york" or anything else... while it's fun to argue over who the greatest rappers are, it actually is kind of stupid to believe in these titles.
case in point, LL Cool J (a rapper with more staying power than any emcee i've ever seen, and just as much right to the title...) was on Letterman promoting his album G.O.A.T. (which stands for "greatest of all time") a few years back, and chuckled when Dave asked him if he really thought he was the greatest rapper ever. "Naw man... rappers don't take this stuff that serious..." seems we can all learn a lesson from the original todd...

hip hop fans need to stop trying to be on the bandwagon of whatever/whoever is hot and just support the rappers they like. if we spent time looking for and supporting good music instead of crying because the radio/video shows don't do hip hop right (i grew up on hip hop with very little support from the radio, crybabies!), no one would even think to blog on this topic.

maybe Nas should have called his album Hip Hop Is Corporate, or Hip Hop Is Vulgar,or Hip Hop Is Producing Crap or Hip Hop Is Not A Valid Career Path, So Some Of You Need To Stop Rapping or some other such title... but it's a pretty good record, either way.

the Answer to all the Mavericks' problems... 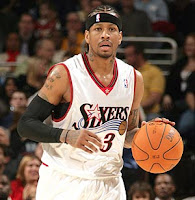 arguably the most dominant player on the planet (and certainly MY favorite player), Allen Iverson is on the trading block. frustrated with Philly's inability to give him the supporting cast he wants, Iverson has demanded to be traded this season. If Mark Cuban has any sense, he will give the Sixers any reasonable batch of scrubs and picks for the 6 foot (in his b-ball shoes anyways...) one man army. ESPN.com's Bill Simmons said it like this:

"First, as soon as this trade happens, Iverson will play out of his mind coming out of the gate, followed by a series of stories and features from his new teammates saying things like "I can't believe how good this guy is" and "He's completely transformed this team, we think we have a chance to win every night now," followed by the Sixers fans flipping out and demanding King's departure. I wish there was a way to wager on this scenario in Vegas. I can't believe softer contenders like the Magic, Nets or even the Mavs have underestimated the undeniable force of his personality, the potential of his crunch-time scoring if there were other scoring threats on the court, or even the fury he'll unleash on a new team. He will practically KILL HIMSELF trying to haunt the Sixers over the next three seasons. Mark my words..."

that's what's up...there is not another player like him, he's got an almost evil killer instinct and he will destroy himself to win. a smart franchise will get him, and if they are ANY good... they will make everyone who ignores him sorry they passed up on him...
(read Simmons' article on A.I. here)

so i've been buying very few comics lately. don't get me wrong, i still love comics and all that, but money is slim these days, so i read a lotta comics in the store! one comic i REALLY want to be better is The Black Panther.
I mean, i get excited just thinking about a really great run of it. alas, Marvel seems determined to not let it happen. the writing is very good (by hollywood director and BET Exec Reggie Hudlin), but the art is struggling, since veteran artist John Romita Jr (Eternals, Wolverine, The Gray Area, Spiderman) left the book for whatever reason after one story arc (collected in Trade Paperback form, cover art by Romita shown here). i mean, the marriage of the Panther and Storm of the X-men (arguably the two most important black characters in all of comics) was drawn by... Scott Eaton? wouldn't it have rocked if it was drawn by rising (black) star Olivier Coipel (Avengers, House of M... cover art seen below), Chrisscross, Carlos Pacheco, or Chris Bachalo (droool...)

anyways, the latest issue of Black Panther is OFF THE CHAIN (and that's a good thing...). the Royal Couple (did i mention that the Black Panther is Warrior/King/Priest of the african hereditary meritocracy of Wakanda, the most technologically advanced nation on Earth? oh... well he is. peep this blog for more background) is visiting other countries since their recent wedding. after visiting Latveria, Atlantis, Attilan and Great Britain, Storm and T'challa's goodwill tour comes to Washington, DC. they aren't in the White House for very long before the president disrespects Storm... (oh no he didn't) and T'challa has to pull his card. now it's REALLY ON!

in this issue, T'challa punks the president, iron man and captain britain. all in a day's work for the greatest man alive!

this is the illest thing ever, fam'ly!
ghostbustin' Bill Murray and Wu-Tang together, now you KNOW you in trouble!
edited by Samax @ 4:24 PM 1 comment: