for those who didn't know, a new Transformers movie is comin' out... as a total 80's kid (yes, my neon has an autobot symbol in the back window... holla!), i am going into full manic-depressive mood swings over this. one day i am crunk like l'il john after a capuccino, the next i'm paranoid that it's gonna be wack...
either way, it shouldn't need to be said that i'll be first in line. of course, it isn't coming out 'till july of '07 so i'll have plenty of time to have more mood swings...
click the pic and go over ta the mighty You Tube and peep the trailer...
jeauh! ('cuz today is a crunk day!)
samax.
www.ghettoManga.com
edited by Samax @ 8:59 AM 1 comment:

Email ThisBlogThis!Share to TwitterShare to FacebookShare to Pinterest
Read More About: transformers, video 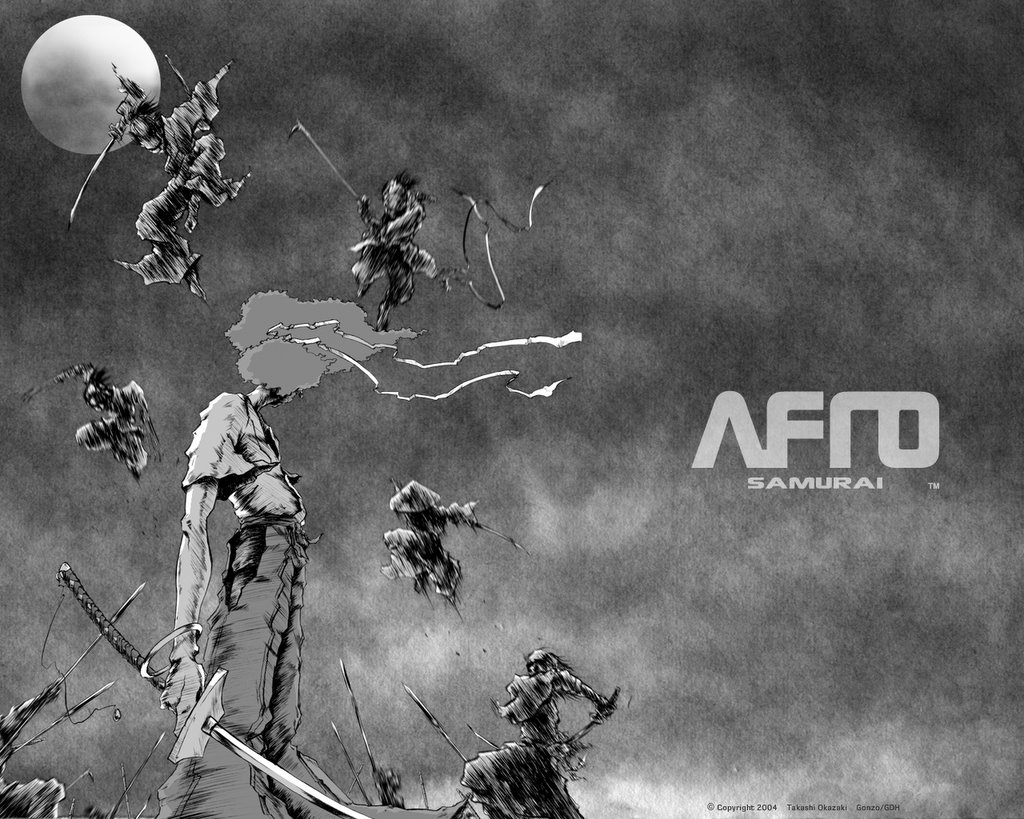 in case ya'll were wondering, i had a blast at the SanDiego Comicon, and will be scramblin' to post on all the cool junk i saw, heard about, and/or picked up. that said, i spent an excessive amount'a time standing in line waiting for stuff. Case in Point: i stood in line probably an hour (and they kept marching us around, which really got on my nerves!) waiting to see the trailer for Afro Samurai... AND IT WAS WORTH EVERY MINUTE!!!
in addition to the show's creator, producers, teevee execs (no, afro samurai voice actor, star of the live action adaptation, and executive producer Sam L Jackson was not there... he was in another part of the convention promoting Snakes On A Plane... nah for real!), i got to meet the cat who's composing the score and putting together the soundtrack: The Rza (wu-tang, bobby digital, ring any bells? no? what are you doing here?)!

anyways peep the trailer. then pick up your tounge and wait feverishly with the rest of us... it debuts this winter on SpikeTV, with DVD release scheduled for spring 2007...
incidentally... RZA hinted that he had some interesting plans in mind for the soundtrack... including an appearance by Big Daddy Kane (if you are too young to know who that is, just nod in agreement, and ask your big brother later...)!!!

for my previous post on Afro Samurai, go here i ran into my man Miles Gunther (who, 'longside his buddy Ivan Brandon, writes NYC Mech

for Image Comics) today, intent on catching up with him, and finding out what he's up to... he gave me the issues i was missing from the NYC Mech mini, Beta Love drawn by the phenominal Andy Macdonald, with covers by Eric Canete (cover to #1 seen here). and lemme say, this mess is the BOMB (i just got to the end of #4 of 6, and i'm savoring it, cousin)!

i readily admit it: NYC mech is one of those books that i was intimidated by at first... it's deep: according to miles, the book is "not science fiction", but it takes place in a new york city that is full of robots, for no apparent reason at all... it's sort of a crime book (closest thing i can think of is lapham's Stray Bullets), with a huge cast of characters, all of whom live (and many of whom DIE) in... (wait for it) New York City. it's gritty, funny, and chock full o' robots! i imagine the use of robots for people is an allegory or metaphor of some sort (actually the root for the word robot means "SLAVE")... but hey! don't crush your brain, cousin! just get into the raw dialogue and finely dressed robots doing bad things! 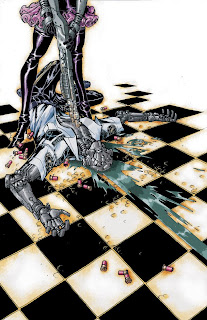 In Beta Love, the decidedly dangerous street diva- Nika- is back, gettin' her Love on with the unwitting sweethearted bus driver, Quentin. He seems a normal enough cat, but falling for Nika threatens to drag him into her life of raw-dogged, wild-out criminal activities... the book's hot! Ivan and Miles are writing this twisted love story so well, shifting from danger to tenderness to foreshadows of impending doom so quickly and frequently it'll snap that neck, son!

the art, by Andy Macdonald takes full advantage of the visual interest you can create using robots for anything from a seemingly pointless interlude (like the one seen here), to a love scene (yeah, i said robot love scene!). whenever i feel like i'm used to the level of craftsmanship and skill in andy's work, i turn a page and he surprises me with his power over the page!
there are currently two NYC Mech collections available, but Miles said he wasn't sure if Beta Love

would be collected. you should definitely get your hands on this story, though... holler at'chour comic shop to track down the individual issues (and get the nifty guest pin-ups with 'em!) so you won't have to wait!

i'll make an honest effort to get at Miles and sit down and interview 'im about his new zombie/samurai story (nope. not kidding) project and other news, until then slide over to the NYC mech message board and geek out...

wack emcees have a new hero! Teapot follows the story of an 11 year-old would-be rap star... there's only one problem: he has NO LYRICS!! like most wack emcees, he is so gassed up on himself he has no idea that he "can't find the beat with a map!"

i met Dahveed briefly and was impressed with his energy and enthusiasm for Teapot! i'll get an interview with them on friday, and i'll update this post...
holla!
samax.

A'ight... i'm in the wind. in less than an hour, i'll hit the road for the airport (with my main man Specialist Mario Cauley, on leave from Iraq. Salaam!) , and by noon (local time) i'll be in Killa Cali for the World Famous SanDiego ComicCon! i'm taking the digicam, so expect updates on what's happening in the comics world. Khalid will get there tomorrow, so my crew will be well represented (have i told ya'll lately: ghostWerks is tha SQUAD!!!)

so for my cali readers and fellow San Deezeeacs, if ya see me, holla like ya know me! the rest'a ya'll:
just holla!

Email ThisBlogThis!Share to TwitterShare to FacebookShare to Pinterest
Read More About: bigSteelo, comics

easily the funniest show to hit your teevee in years is... well, the Chapelle show. but other than that: Gotta be Aaron McGruder's adaptation of his ground-breaking comic strip The Boondocks! after bouncing his idea off the networks (and i'm sure the bouncing harsh words off their execs) McGruder struck a good relationship with THE network: Cartoon Network! more appropriately their hipHop loving, cuss word spewing imprint Adult Swim!

anyways, The Boondocks Uncut and Uncensored collects the whole first season, and will hit stores July 25th. put on your N-word resistance earplugs and cop it, dunny! in the meanwhile, go to the mySpace profile and check out character bios, animations and other fly crap, nyukka!

Email ThisBlogThis!Share to TwitterShare to FacebookShare to Pinterest
Read More About: art

Email ThisBlogThis!Share to TwitterShare to FacebookShare to Pinterest
Read More About: movies

yup. I did it again... i made a buncha free wallpapers for ya'll (including the fresh BBWW joint shown here). just click the picture to go to my site and cop some free wallpapers, cousin...
even though i'm broke, ya'll can still cop 'em for free, cause that's how i get down!
holla!
samax. 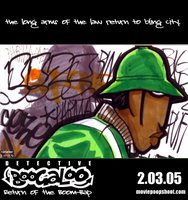 there's no need to dumb it down:
Detective Boogaloo.com is up and runnin!!!
the original HipHop Cop is on the scene, makin' Bling City safe for the shorties...
peep the adventures of Detective Boogaloo and the Ill Crimes Unit, created by mad genius, my main man Jamar Nicholas. as you (should) already know, i really dig Jamar's sense of humor and design, and now he's broken free and given Boogaloo his own website now, dunny!
peep it, and tell him ghettoManga keeps an eye out on some neighborhood watch ish!
holla!
samax.
www.ghettoManga.com
edited by Samax @ 3:23 PM 5 comments: 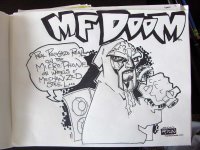 click the sketch for an awesome MF DOOM interview. in the interview, the Villain speaks on new collabos with Ghostface (post Fishscale)and Nas, plus a possible new animation project. you'll also get his perspective on industry alliances, beef, free Downloads , how to raise your young'uns and more... 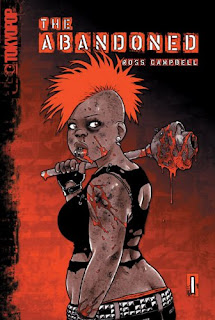 cover to The Abandoned by Ross Campbell. published by and c. 2006 TokyoPop. Holla!
During yesterday's listless loitering session at Barnes+Noble, i was mildly annoyed that i couldn't find what i wanted to read, so i wandered into the manga section where i saw the cover of The Abandoned by Ross Campbell. the cover blurb let me know what i was in for, and to sum it up: lesbians, teen angst, zombies... the usual. but the protaganista was black, so i figured what the heck, right?

well guess what: this book was freakin' awesome!!! if you are a fan of suspense, zombies, or really well-drawn full figured girls and/or innards, YOU NEED TO READ THIS! Ross has a great understanding of small town teenagers, their emotions, their fears, and exactly how they would respond to a "zombie invasion"
the star Rylie and her friends are so naturally depicted that when the carnage began, i was a little disappointed... until it became clear the great characterization would continue! as they scramble to escape flesh-eating townies, scrounge for clean food and water, and discuss effective ways to smash in each other's skulls in case they turn, the cast keeps the great dialogue comin'... PLUS Campbell draws everybody immaculately from cover to cover.
i won't say anymore 'cause i want you to get as much from it as i did, if you are smart enough to find and read this great book based on my recommendation...
holla!
samax.
edited by Samax @ 6:57 AM 2 comments: