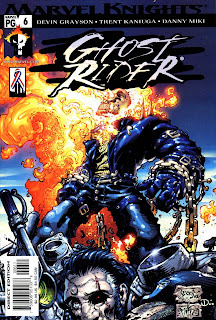 to promote the new GhostRider flick comin' out next month, sony pictures waded through the nerds, geeks and weirdos (you may decide which category you wanna put me in) at the San Diego Comicon, and sat a bunch of us down to talk about the screen adaptation of everybody's favorite Spirit of Vengeance. so anyways, peep the video below, go to www.ghostRiderMovieBlog.com to vote for me as numero uno gR fan, and/or peep my original blog about the distiguished mr. Blaze by clicking the pic above... 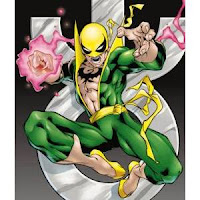 the Seventies spawned many great people (like me!), piles of ugly clothes, and lots of funky music. in addition, Marvel cranked out a gang of great comic characters, such as danny rand, better known as Iron Fist. created in 1974, Iron Fist is a product of white people's apparent need to inject a blonde, blue eyed saviour type into the otherwise foreign and exotic adventures of the colored masses... in this case, the "oriental" world of high flying kung fu!

the short version: young Danny Rand finds himself in the mystical city of K'un L'un after his parents are slaughtered by the bad guys. seeking vengeance, he studies martial arts at the feet of Lei Kung "the Thunderer" and ascends the ranks to become Kung's most gifted disciple. He is thus granted the right to battle Shou-Lao (a giant mystical dragon, for the record), eventually slaying him and plunging his fists into the dragon's molten heart. Rand emerges from the slain dragon's chamber with the dragon's tattoo burned on his chest, and the power of the Iron Fist in his hands... (get more detail on the character here!) then, he becomes an ass-kickin' kung-fu superhero! NICE!

so anyways, there's a new Iron Fist series out by Ed Brubaker (Daredevil, Gotham City PD) and David Aja (Daredevil, Giant-Size Wolverine) called The Immortal Iron Fist that seeks to delve into the mythos of the cult marvel b-list hero. it looks great so far... by the way, there's also a movie starring Ray Park/Darth Maul in the works for 2008 release, directed by Steve Carr (Doctor Doolittle 2, Next Friday) of all people.
we'll see...
samax.
www.ghettoManga.com
edited by Samax @ 3:37 PM No comments:

it has finally begun...

versus called me out. i have been slack on my game lately in many areas, but none so inexcusable as my neglect to speak on the broadcast debut of
Afro Samurai,
the new Animated Series starring the original Bad MuthaF^!$a: Sam L Jackson... which is not to say that i'm late to the game:

i been geekin' on this since february (don't believe me? check my previous blogs, cousin!), and i went aaaaall the way to killer cali to peep the news on it at the sanDiego 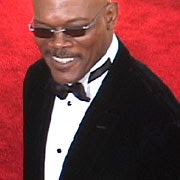 comicon, where i shook hands with the muthaf!^#$n' Rza... anyways, now the mostly-lame spikeTV is airing the show, (10 o'clock thursdays where i rest... check your local listings kids...). it was my job to make sure you know about such things, and i dropped the ball like terrell owens. my bad.
but i come baring gifts, fam'ly! click the pics for a clip apiece on youTube. then start watching it on thursdays before you go to the club... if you see me out, we can talk about it, a'ight?

give me LIBerty or give me... 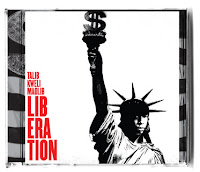 many a hip hopper considers Talib Kweli (the non-Mos Def half of Black Star) to be wack now... i'm not one of 'em. as such i was an easy sell for that new Talib Kweli/Madlib mixtape LIBeration (Ta-LIB... madLIB... get it?!?). i mean, it's a no-brainer! kweli rockin' it with hip hop's best kept secret, the magnaminous (i love that word... i don't know what it means, but i use it anyways) Madlib!
well, that... and it's free! tap the pic and get 10 joints for nothin'... don't say i never did nothin' for ya!
i just copped it myself... expect a review soon.

well, it's 2007. james brown, gerald levert, j.dilla, and joseph barbera didn't make it... but you did! and that's worth celebrating!!! i'll hitch'all back with some reviews and assorted other opinions later... for now, i'm just glad to be alive, and i'ma go enjoy myself...