you know what time it is?

yoh, it's time for a GhostFace moment...

Sadat X at Rock The Bells!

yes... there is a comic in the works by Robert Love (Chocolate Thunder) and David Walker (Bad Azz Mofo, Tokyo Tribes) called (i shit you not) The Blind Monkey Style. i could only speculate about the story, but from this pic, i'd say it's gonna kick lots and lots of ass! when i know more, so will you...

put this in your ear! 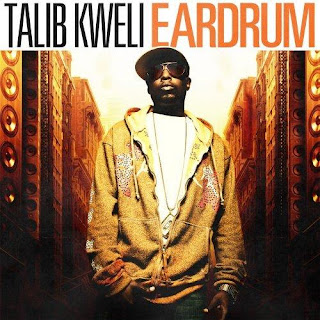 "If you are so Stupid/
to let folks buy out your movement/
for less than it's worth, that's what you get!
(if it's in your future, don't do it...)"
-Bavu Blakes aka Mr.Blakes, Breakdown 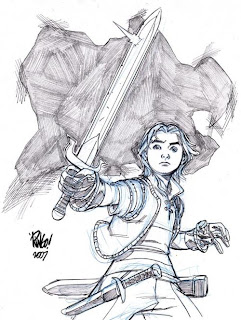 Lights, Camera, cock back the Hammer... 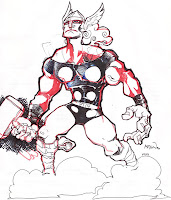 as his comic gets a much-anticipated return to the comics racks, Stan Lee and Jack Kirby creation, The Mighty Thor looks set to get lifted up to the big screen as well. Easily one of marvel's most powerful heroes, the thunder god Thor (often referred to as "Marvel's Superman") has yet to get the real hollywood treatment. Marvel Studios is setting Matthew Vaughn (Layer Cake, Stardust) to direct the screenplay by Mark Protosevich ("I Am Legend"). i did the drawing at left to celebrate the occasion... well, i was bored.

anyways, that's gonna take a million years to come out, so cop the comicbook version... the new book entitled simply Thor by J Michael Straczynski (Babylon 5, Rising Stars, Amazing Spiderman) and Olivier Coipel (Legion of Superheroes, Avengers, House of M) oughta be a decent place to jump in... Straczynski and Coipel are pacing things slowly, but I don't expect that to last.
“The landscape of the Marvel Universe has changed radically in the past few years, and Thor now returns to a post-Civil War environment which has seen hero face off

against hero, registration become law, and is, all in all, a remarkably different America from the one that he left,” explained series editor Warren Simons. “His first encounter with Iron Man is going to address some of these points, especially the question of what happens when you take a God’s genetic code without his permission.” Oh, did i mention that Thor died at the end of his old series (he did...), and that all the Asgardian gods were dead too (as heavenly doornails), or that the Marvel heroes had a violent conflict over registration laws (in the aptly titled Civil War crossover event), or that Iron man and Mr Fantastic made a clone of Thor that whooped up on the rebel heroes, brutally killing Bill Foster (the unimaginitively named Black Goliath)... Oh No They Didn't... well, yeah. they did. so that's why Thor has returned to give Iron Man his "don't let me catch you in the street" notice (see the cover to Thor #3 at left)!
holla!
samax.
www.ghettoManga.com
comics. hiphop. news. art. culture 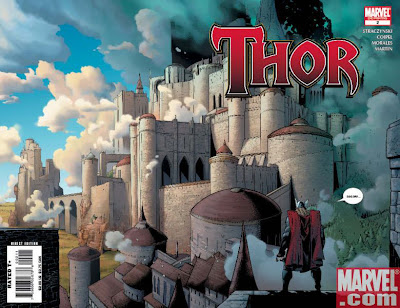 Stuart Immomen's (Ultimate X-men, Secret Identity, Nextwave) debut issue of Ultimate Spiderman will arrive in your friendly neighborhood comic shop this wednesday. after a whopping 111 consecutive issues by Mark Bagley (not including annuals and stuff), Immomen hits the ground running with issue 112. if you (like me) can't wait 'till then, preview the 1st 8 pages here
edited by Samax @ 8:30 PM 1 comment:

the monster writer-artist team of Mark Millar and Bryan Hitch (The Authority, The Ultimates) is taking the reigns to Marvel Comics' flagship book:
"[Non-Fans] associate Marvel with Spidey, but as fans we know it all started with Fantastic Four!" explained the highly renowned writer at Wizard World Chicago.
Millar (who passed on taking over the X-titles with Hitch and two other artists) said of the Fantastic Four, "It was probably the most radical of all the Stan and Jack collaborations in that we had a superhero cohabiting with his equally super girlfriend, the world's ugliest superhero, a super-hedonist, and with no masks or secret identities. It was the book that broke all the rules, which is something we take for granted."
read more about Millar's plans for Marvel's First Family on CBR
holla!
samax.
www.ghettoManga.com
comics. hiphop. news. art. culture
edited by Samax @ 7:24 PM 1 comment:

or is the cover art to Kanye's highly anticipated new record Graduation looking better than the actual music?
for real, fam... the only thing wrong with this record cover is that I DIDN'T DRAW IT!!! 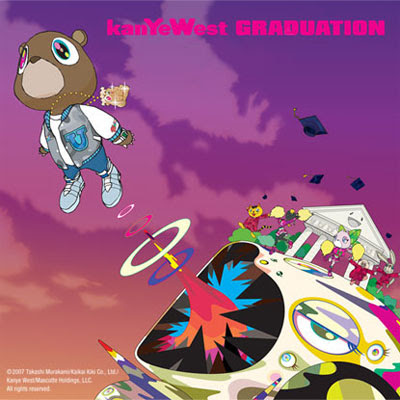 Black on Both Sides...

props to my man Khalid, who hipped me to this: Mos Def and Jack Black (get it? Mos' first solo joint was called Black On Both Sides, Jack's last name is "Black"...) have a new feel-good comedy comin' out called Be Kind, Rewind. it looks pretty freakin' funny too (i love Jack Black, though...). this is a must watch for me...

see y'all there when it comes out!
holla!
samax.
www.ghettoManga.com
comics. hiphop. news. art. culture
edited by Samax @ 6:20 AM No comments:

"while the government Talk about a mission to Mars,
They leave the Hood stuck in a position to starve.
Capitalism's a Religion that makes Satan a god,
and teaches self-righteous people to embrace the facade"
-Immortal Technique
edited by Samax @ 6:10 AM 2 comments: 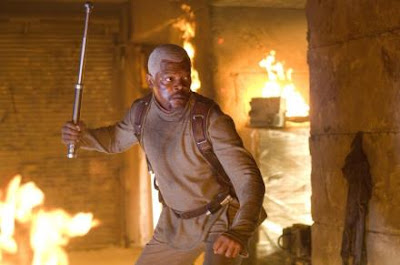 Sam L Jackson (Afro Samurai, Star Wars prequels, Shaft, Pulp Fiction) and Hayden Christensen (Star Wars prequels, Life As A House) will be starring in a new film called Jumpers next year (based on the 1992 Steven Gould sci-fi novel) about a breed of mutant teleporters ("Jumpers"... get it?) and the sect of hunters who track and kill them ("Paladins"). since the movie website is trash, i'll recommend you to this blog instead for more info on the film.
holla!
samax
www.ghettoManga.com
comics. hipHop. news. art. culture.
edited by Samax @ 6:46 PM No comments:

Angry Black Man On A Elevator 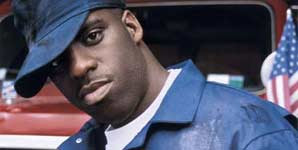 that nigga Rhymefest managed to get me straight head-knoddin' to a track by... Li'l Jon? don't hit the back button yet playa!!! i'm tellin' you, that mess is straight fire! this week's cut is called Angry Black Man On A Elevator, and you can hear it on the ghettoManga mySpace page... if you prefer to get yours from the horse's mouth, Rhymefest has a page too... otherwise, peep the "Makin' Of..." Documentary here:

nothin' more needs to be said...

Email ThisBlogThis!Share to TwitterShare to FacebookShare to Pinterest
Read More About: cartoons, video 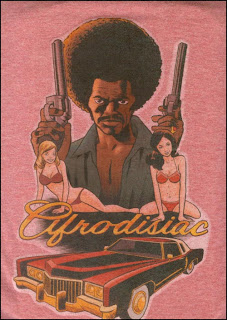 my clients are keeping me busy, so i haven't had time to blog much about comics...
and i'm not gonna do it now either... HOWEVER, i just HAD to blog about this SWEET iron-on by indie phenom Jim Rugg of Afrodisiac, the blaxploitation super-hero, ladies man and all around bad mofo from Rugg's equally badass comic: Street Angel...

SWEET!!! go harrass Jim (like I did!) so he will put these on the market, fam!

Ball Till You Fall 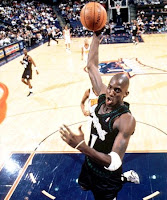 the Boston Celtics are on the brink of signing the best player they've had since Larry Bird...
Kevin Garnett is more or less a lock to go to the Eastern Conference's most revered (yet lately, its most Irrelevant) franchise. but he don't come cheap; Boston GM (and former Celtic scrub) Danny Ainge had to deal FIVE players to get him away from (former Celtic great) Minnesota GM Kevin Mchale, including Al Jefferson, Theo Ratliff and a future No. 1 draft pick. assuming KayGee agrees to the contract extension Boston is requiring, he'll turn the Celtics into instant Conference Title contenders, alongside Paul "The Truth" Pierce and (newly acquired) Ray "He Got Game" Allen. 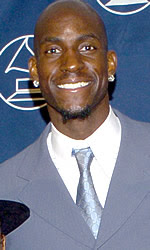 as much as the Celtics (and struggling GM Ainge) needed this, the NBA needs it more... as if the soft serve Eastern Conference wasn't causing enough crying last year, the Top Two draft picks went to franchises in the northwest where they'll never be seen on national teevee, then that referee scandal was whoopin' the League's butt... so this news is welcome to B-Ball fans no matter WHO you cheer for...
holla!
samax.
www.ghettoManga.com