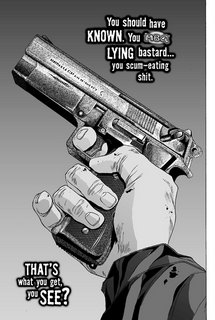 when i decided to call my blog ghettoManga, i was describing my own comics: fresh, dynamic storytelling, with the variety of any of the japanese fare, but with the street sensibility that comes from a life of listening to public enemy, ice cube and poor righteous teachers and made not in japan, but right here in the USA... the for us by us of comics.

since then, i've run into lots of stuff that fits the bill just as well, and none of it more than Felipe Smith's MBQ, published by TokyoPop.

The Jamaican/Argentin/American artist reps hip hop all up and through his book, as well as his mixed heritage. "The main character in my book," he says of his dreadlocked protagonist Omario, "wears an Adidas Argentine National Soccer Team windbreaker in every issue!" He joked with me in an email, "If you dig it, please cop yourself a copy, haha! I've got Tokyopop to answer to, and if this book doesn't start circulating, I'm back to serving drinks at a karaoke bar. Hahaha..."

appreciated by his TokyoPop editor, Luis Reyes, who says when Felipe "submitted a story for our Rising Stars of Manga about a frustrated comic book creator who has decided to express his anger at a terribly misguided, conceptually myopic editor by shooting him right through the head, I knew that I wanted to be that editor..."

the story he's describing became MBQ, a book "about the poverty this creator lives in... the

friends that help him out... the streets of LA and the cops and the thugs and the regular people and the tourists and the burger flippers and the yuppies and everyone and everything coming together, living together in an environment that could only be described as absurd... if you didn't LIVE it every day of your life..."

and apparently, this cat is on some next ish! Felipe sent me a link to his website www.felipesmith.com, inviting me to check it out, and now i'm telling YOU to do the same...when i decided to start sharing comics with my people, this is just the kind of stuff i was hoping i'd find...
COP IT

Yeah I copped that book somtime last year. No doubt one of the best, and very well put mangas I'v read so far.

Damn, didnt know this cat was Argentenian and Jamaican. Nice t know more of the story.I will be looking for MBQ.

yep. MBQ is one of my favorite books. You'll enjoy it!