Cartoonist of the Year Award for 2007

Mountain Girl created by Ross Campbell
only God knows how i managed to get married to a woman who is not particularly interested in comics. but one thing i know for sure is that my wife loves her some Ross Campbell. that would be reason enough for me to give the ghettoManga Cartoonist of the Year Award for 2007 to Ross Campbell, but as it turns out, he's a damn good comicbook artist as well!

my first exposure to Ross's work was the southern-fried Zombie one-shot The Abandoned, which laid his knack for naturalistic characterization right next to his otherworldly gift for drawing sexy, big-boned girls with attitude. and i mentioned there's Zombies, right? anyways, by the time i put down the book (at that time, i had no money to buy the book... i was straight BROKE!) i was an INSTANT fan. soon, i was able to get in contact with Ross on deviantArt (or maybe it was mySpace), and was exposed to the width and bredth of his work...

see, that's how i found out about Wet Moon, an Original Graphic Novel series about a group of girls attending art school in a small southern town. the multi-racial cast of goth/punk chicks and the guys (and girls!) that love them is a captivating read! the lazy, slice-of-life story progresses so naturally that you barely notice you are reading a story. the artwork, dialogue and activity of the book seeps into your mind effortlessly (not an easy task!) thanks to the obvious skill and attention to detail of the do-it-all author.

In addition to having his original graphic novels The Abandoned and Wet Moon published (by TokyoPop and Oni Press, respectively) by others, he publishes at least one book, the unbelievable Mountain Girl, on his own. Mountain Girl is the ongoing saga of Iha Naga, a wandering warrior who will fight, conquer and eat any foe who stands in the way of her... yeah, i said eat... who stands in the way of her ongoing quest for... whatever. 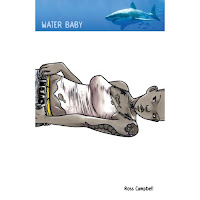 and when isay any foe, i mean any foe: man, beast, god, or any combination thereof! so far there are two twenty-odd page issues of the magnificent Mountain Girl comic, and i can't wait for more. by the way, Ross has a book scheduled to come out in June 2008 called Water Baby (another reason 2008 will NOT suck) that you can pre-order (artists love it when you pre-order!) here. i can't tell you much about that, beacause i don't know. but when i do, so will you!
peace fam!
samax.
edited by Samax @ 4:29 AM