You gotta say the whole thing. Yes, every time... 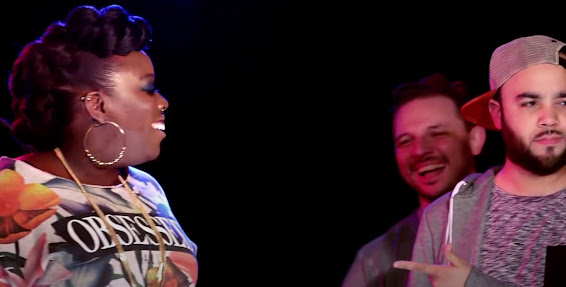 I have never been to New Jersey.  My sister was born there, and my other sister lived there for a while, but I've never been.  Still, as a hip hopper I recognize the massive contributions New Jersey has made to the culture.  Some you know:  Redman.  Lords of the Underground.  Poor Righteous Teachers.  Lauryn Hill an'em.
Thanks to the internet, I have become aware of tons more incredible musicians from the Garden State that are not yet household names: Venomous2000, King Ra, Conscious Operations, and more...

Now I can add The Band Called FUSE to the list.

I first became aware of The Band Called FUSE through one of my internet peeps (peace to  that dude A-A Ron) who was always joking around with Desiree, The Band Called FUSE's resident vocalist and haiku guru.
As I slowly looked into the creative stuff on Desiree's bio, she introduced me to her band without even trying (social media worked again).
So far, my favorite song of theirs is My Peoples. I love how Desiree and Silent Knight make it blend on this one...
I'm still relatively new to them, but I don't want to waste this moment.  So I recommend you check out The Band Called FUSE on your favorite social media site (like Twitter), and if you like what you find, unlock the catalog via their Patreon.
peace.
-"some AX"
Samax Amen is a professional Content Developer, Illustrator and Cartoonist. He is the artist of many great comics you never heard of like FREELANCER LIFE, Herman Heed, Champion of Children, and The World As You Know It. He even writes and draws his own comics, like Dare: The Adventures of Darius Davidson, Spontaneous, and Manchild when he gets around to it. Because making comics is hard and stuff, he started GhettoManga as a blog in 2006 and as a print magazine in 2008.
GhettoManga.com
comics. hiphop. news. art. culture