That dude @JamarNicholas updates you on the LEON GN, AWESOMECON, STUDIO BLACKBOSS and more...

The mighty Jamar Nicholas sent an update out to all us long-suffering backers of LEON: PROTECTOR OF THE PLAYGROUND, and I'm sharing an excerpt with you, because that's how I roll:

I was on a few panels, one being a race & comics panel where I shared a mic with mainstream hero Jamal Igle (MOLLY DANGER, DC Comics) and Jeremy Whitley (PRINCELESS). Also was interviewed by Washington free-thinking network RT and WATCHING THE HAWKS. We talked briefly about race, comics and the need for fresh voices.

You can see the segment I was interviewed in at 14:00.
AWESOMECON came and went and I had fun, but I'm really glad to be clear of conventions and appearances and excited to dig heels into the studio so I can get LEON wrapped with less static interference. 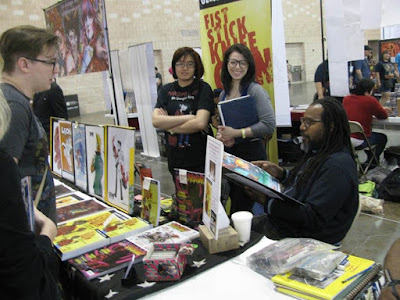 SANDRA and YAYA are my studio assistants who have the herculean job of getting/keeping me sane and on-target!. They have come on board in the past few months and as you can see, things are already shaping up around here. Thanks gang!


I have nothing intelligent to add to any of that. Feel free to chime in via the comments or on the social media machines...
Peace,
-samax

Samax Amen draws people, places and things for fun and profit. He is the artist of many great comics you never heard of like Herman Heed, Champion of Children, The Brother and The World As You Know It. He even writes and draws his own comics, like Dare: The Adventures of Darius Davidson, Spontaneous, and Manchild when he gets around to it. Because making comics is hard and stuff, he started GhettoManga as a blog in 2006 and as a print magazine in 2008.
GhettoManga.com
comics. hiphop. news. art. culture
edited by Samax @ 3:08 PM