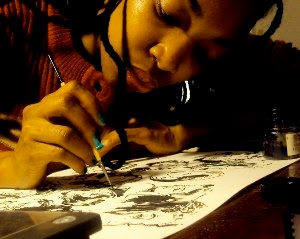 Emerging artist and musician Afua Richardson was incredibly engaging in this interview on the Crowdfinders Podcast.  Talking about all sorts of things, including her upbringing in the boroughs of New York, clashes with band nerd drama, and her evolution as a musician and illustrator.
I have followed Afua's work for years (I remember her from the Lakota Sioux days), and yet I still learned a lot about her in this podcast. The easy demeanor of the interviewer draws Afua out, and they flit around from topic to topic, and the end result is a conversation that is worth eavesdropping on.

Afua takes whatever comes and uses it to make herself better. She clearly hated the first comic she made, but continued to do more, adding each experience to the next. Her life story must be heard to be believed, so I encourage you to check out the podcast.

It's very empowering to hear how she took an alternative path to learning to make comics. She delves into her process too, which is pretty unconventional as comic artists go.

It's a very entertaining conversation, but I especially think anyone hoping to make that next move as an artist or musician would benefit from what Afua has to say. If you read down this far, you should definitely click here to check out the podcast.

Samax Amen draws people, places and things for fun and profit. He is the artist of many great comics you never heard of like Herman Heed, Champion of Children, The Brother and The World As You Know It. He even writes and draws his own comics, like Dare: The Adventures of Darius Davidson, Spontaneous, and Manchild when he gets around to it. Because making comics is hard and stuff, he started GhettoManga as a blog in 2006 and as a print magazine in 2008.
GhettoManga.com
comics. hiphop. news. art. culture
edited by Samax @ 10:30 AM