9 Places to Make Money with a Comic Book Vending Machine 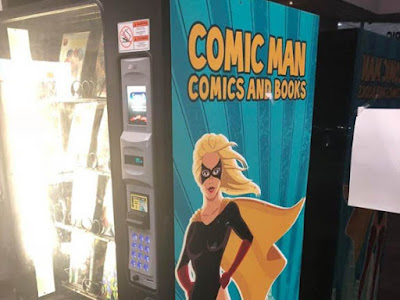 This picture of a vending machine that dispenses comics has been making the rounds this week, and for the most part, comic book fans have been bringing up all the reasons it would not make money.  As someone who has consistently been told "You can't make money doing x"  WHEN I WAS ALREADY MAKING MONEY DOING X, I thought I would brainstorm a few ways to flip a well designed and deployed comix machine into a nice income stream.

So the first things that come to mind is you need to know your audience.  It's NOT comics nerds who go to the comic shop regularly.  The level of service of a local comic shop cannot be duplicated by a machine.  You also don't want to be competing on cost.  You want to buy your comics cheap (at Half-Priced Books, clearance sales from the Local Comic Shop, Garage/Estate sales, collector liquidations, eBay, etc), then mark them up and resell.  You should bag and board them, but you want a consumer that is buying disposable entertainment, not a family heirloom.  Small cues like putting a sticker on the cover to obscure the original price will scare off collectors and regular comics shoppers.  They are better served by their LCS.  You want people who need to buy from your machine because they are unaware of, or unwilling to shop at any comic shops.  Preferably people who are captive for a while.  Who have no choice but to stare at your machine and be hypnotized by comic book covers.


So where do you find those customers?

I brainstormed 9 places to make money with a Comic Book Vending Machine, but this list could definitely be longer.  What did I miss?
https://t.co/dwDbnlssvT pic.twitter.com/17oFq37sdY
— GhettoManga Magazine (@ghettoManga) May 11, 2018


If you try a comic book vending machine, switch out the contents of the machine regularly.  Start out with multiple price points, from cheap (resell those 25 cent comics for $1.00 - $1.50) up to trade paperback graphic novels for $15-$25.  Again, switch out contents monthly (or weekly if you're feeling really frisky) to create a sense of urgency, and so you can get a sense of what sells in each of your locations.

Remember, this won't work as an attempt to replace or even compete with comic shops.  But I think it would provide a way to expand readership and bring back people who used to read comics.  Genre entertainment (superheroes, sci-fi, fantasy, horror) is bigger than ever with more diversity than ever.  Digital outlets are trying to take advantage of the medium, but the power of comics as a physical object is still way too limited by niche distribution.

Are we ready to try something new?

Thanks for reading Matthew!

Where do I purchase a vending machine I would like one.im looking to buy a storefront too

I would just Google vending machine suppliers. You might have to call the company to find a machine deigned too set books, or have one retrofitted like the comic book man founder did.

You're not the only person to ask this question, so i will research it and write a new post about what I find.