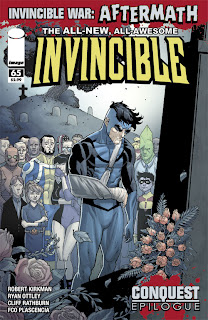 here's another 5-page preview of Invincible (#65, courtesy of the fine folks at CBR) which features a heartfelt moment between Invincible and his girlfriend Atom Eve. ole boy's in a sling after last-issue's battle royale (you should see the other guy), and apparently this issue is primarily gonna be a pause in the action for the writer-artist team of Kirkman and Ottley to tally up all the characters they offed in the world-smashing Conquest story arc. click the pic for a peek at the best superhero comic in the Universe, people (you'll know what i meant by that title once you read the preview)!
holla!
-samax
ghettoManga.com
comics.hipHop.news.art.culture
edited by Samax @ 3:15 AM

Just picked up the first Invincible Ultimate Collection due to all the reviews you've done about the book. Have to see I'm enjoying it so far.

word. i replaced a whole lotta mediocre comics by just reading Invincible instead. it's my favorite superhero comic by a mile!