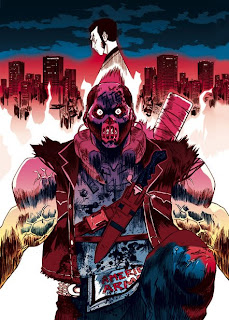 that dude Felipe Smith (MBQ, Peepo Choo) checks in to briefly speak on his new book and life as a comicbook artist in Japan... in case you missed it, click the pic for my previous post about our favorite Jamaican-Argentinian-American wandering Samurai! i figured some of y'all would enjoy getting the uncut real from the horse's mouth! (if you're reading this Felipe: GET BACK TO WORK! lol!)
holla!
-samax
ghettoManga.com
comics.hipHop.news.art.culture
edited by Samax @ 4:01 PM

i think i'm gonna cop them even tho i don't read japanese... i hope they eventually release these in english!

that's awesome. after the video i clicked on the one where he's visiting "rayo rojo" in argentina. funny video. Intresting topic and was amazed to here him talk spanish, english, and japanese.

yeah, i had the same reaction when i first became a fan of his a while ago. i actually met him in San Diego a few years ago and hung out. he has the ability to make you feel like you're his best friend after meeting him just once. he's a trip!

Time to go to Amazon and peep MBQ.

absolutely! MBQ gets my highest possible recommendation! there's nothing else like it!