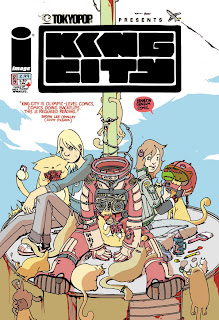 so this week has been pretty eventful... i had a photoshoot with Dallas free newspaper The Quick for an interview they will be running about me (next week, i think), and being the silly sonuvagun i am, i scheduled it to be at my local comic shop, so i could pick up the first issue of Brandon Graham's gonzo urban fantasy King City and indulge in the ego-stroking exercise of the photoshoot all in one shot! to get the full ghettoManga experience, you should buy the issue, then download Brandon's free Inkstuds Mixtape (featuring classic joints from Rakim, KRS ONE, and Jadakiss) for background listenin' while you read... sweet! i find it hard to see how anyone could pass up on a massive comic for 2.99 if you ALSO throw in a free mixtape with it! 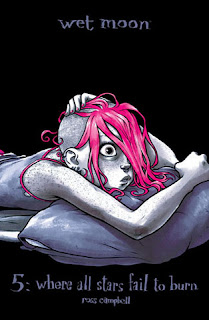 i also grabbed my copy of Wet Moon Volume 5: Where All Stars Fail to Burn

which included the additional boost of finding out that Ross included my drawing of his character Unknown in the Fan Art section! this was my first time having my art published by one of the major indy publishers (for the record, Oni Press), so for me it's kind of a big deal! plus, i'm not sure if i expected my piece to be chosen... anyways, the book is great. i'm still crunk from this week's take. i copped two books by comics do-it-alls i really like, and looked good doing it! there's more news that i will get to later, but that's all for right now...
holla!
-samax
ghettoManga.com
comics.hipHop.news.art.culture
edited by Samax @ 12:38 PM