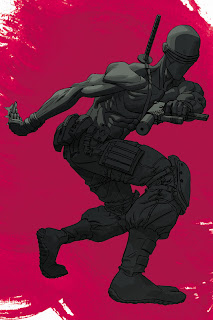 Snake Eyes final art by ~MisterHardtimes . i haven't seen the new GI JOE flick yet, even though many of my friends said i should. i can honestly say, I'm just not interested. however, lest that be taken as a slight against the coolest character in the JOEniverse, i posted a picture of my #1 man in black (with due respect to Will Smith and Johnny Cash) Snake Eyes drawn by that dude Mike Hawthorne (Hysteria, GI JOE:ORIGINS). while i admit that my original queeziness about the film is probably misplaced, i loved the Warren Ellis penned GI JOE:RESOLUTE cartoon on Adult Swim, and watching it absorbed all the enthusiasm i had for seeing the Real American Heroes on screen... now if someone will convince America to start releasing animated features like that on the big screen in the states... THAT'D be worth the trip to the theater!
edited by Samax @ 8:48 PM

I totally agree with you. Resolute was definitely the way GI Joe should be. I did see the live action movie and I was surprised by how much I liked it. It's not bad at all.

GI Joe:Resolute was amazing. Easily one of the best things I have seen all year. I think Topless Robot said it best, "Seriously. You know how we all complain that so-and-so raped our childhoods? Well, this is the exact opposite. I used this line in my Twitter, but I stand by it -- G.I. Joe: Resolute is like Warren Ellis made tender, passionate love to our childhoods, and he had an enormous dick. If you don't believe me, watch episode 2..." I think that says it all. Here is a long to the blog post. I hope you don't mind, http://bit.ly/V3Cvp