Seagal and Lohan on Deck for 'Machete' 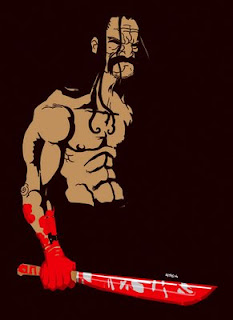 Machete fan art by Samax
when i reported that Robert Rodriguez was gonna do an actual film version of the mock trailer Machete, i got emails saying i was crazy. as it turns out, the production for the little-grindhouse-film-that-could started this week. i learned from /Film's Russ Fischer today that the cast does in fact include Robert De Niro, Jessica Alba, Michelle Rodriguez, Steven Seagal, Lindsay Lohan, Cheech Marin, Don Johnson and Jeff Fahey in supporting roles behind the main man Danny Trejo. for more details, hit /film.
holla!
-samax
ghettoManga.com
edited by Samax @ 7:08 PM

I think this is dope. "Where's my wife and daughter!" HA!