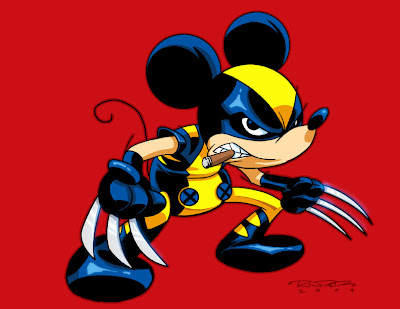 Mouserine by KidKalig aka Khary (like Atari) Randolph.
Not a Dream! Not A Hoax! Not an Imaginary story! Multimedia giant Disney acquired Big Two comicbook publisher Marvel Comics for a reported $4 Billion today.
not a bad deal to net the rights to some of the most well-known characters in the world! Marvel's competitor, DC Comics is already owned by Warner Brothers.

"This transaction combines Marvel's strong global brand and world-renowned library of characters including Iron Man, Spider-Man, X-Men, Captain America, Fantastic Four and Thor with Disney's creative skills, unparalleled global portfolio of entertainment properties, and a business structure that maximizes the value of creative properties across multiple platforms and territories," said Robert A. Iger, President and Chief Executive Officer of The Walt Disney Company. "Ike Perlmutter and his team have done an impressive job of nurturing these properties and have created significant value. We are pleased to bring this talent and these great assets to Disney." 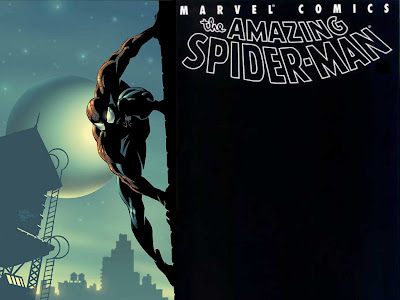 "Disney is the perfect home for Marvel's fantastic library of characters given its proven ability to expand content creation and licensing businesses," said Ike Perlmutter, Marvel's Chief Executive Officer. "This is an unparalleled opportunity for Marvel to build upon its vibrant brand and character properties by accessing Disney's tremendous global organization and infrastructure around the world." 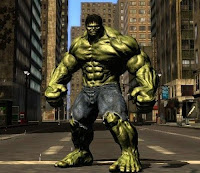 hopefully this will mean better marketing of comics in general, which would seem to be a good move for any company whose business is the generation of intellectual property. we'll see about that, but according to my sources, Marvel Editor-In-Chief Joe Quesada is reporting the publishing side will be unaffected. i would assume there will be some effort to strengthen Marvels place in the publication of comics for kids, or that Disney would publish spinoff comics through Marvel instead of licensing them out. also it remains to be seen what it'll mean for Marvel's videogame licenses with Activision, Sega and others...
what do you guys think about this deal?
edited by Samax @ 4:01 PM

It's on now. The Rivalry heats up Disney/Marvel VS. Warner/DC.

Wow, I hope they don't clean up any of the Marvel violence or cussing that we have all grown to love.

Cons: Despite what Quesada says, how will this impact the comic industry? Warner Brothers or Disney have not really been responsible for anything cool or innovative for quite a while. Sorry Pixar was not a Disney creation. The Lion King was the last real great hit for Disney. Marvel? DC? Damn, what's there solution for the slow death of American interest in comic books? Raise the prices of individual issues every 3-5 years and reissue old comics through trade paper backs. How many Spider man or X-Men books and spin-offs will they attempt to sell before they slowly lose dilute their value amongst?

Pros:
As the big dogs get bigger, they become less mobile which may be a good thing for independent outfits. I don't expect Marvel or DC to really develop anything new, exciting and interesting characters any time soon. Fine, indies will probably not be able to compete against Spiderman or Batman on the racks but there's always a possibility of making something happen. After all, Marvel or DC will more than likely never create the next PVP or Penny Arcade. And they're not Ghetto Manga.

Don't get me wrong, I'm sure there's a number of things DC and Marvel will do correctly with their unlimited coffers but history has shown us that they (DC, Marvel, and yes, Hollywood) will continue to be shortsighted. There are so many streets, alleyways and avenues available to the independent creators to tell their stories and reaped the profits . . . just stay off the main highways, it can be very dangerous in the Matrix.

Oh yeah, thanks for Image, Dark Horse and Fantagraphics.

Do you remember when Marvel characters seemed cool and edgy because they were not enveloped in the history and culture of DC comics? Sooner or later Marvel properties may be viewed as corporate. They will still get their bread but hopefully they won't suck the soul out of their own properties. Ooops!! They're already in the slow-grinding process and they're not even using vaseline.

Here's a video clip of Spiderman celebrating the corporate merger. It's so cooool.

Man...My commentary is way too long for this.

B_Steelo . .. I don't know you but, don't be scared, drop it. I'm sure Samax won't mind and other folks, like myself, are interested.

yeah Steelo... let us have it!
if i can take 200 word, all caps responses from Tyrese fans, i can hear your opinion!

i still haven't made up my mind about this myself. i think it's good to strengthen Marvel. a healthy Marvel is good for comics in general, whether i like their books or not.

hopefully, Disney will take an interest in the marketing of comics. maybe advertise on their cable networks.

i'd also like to see them strengthen Marvel's kids' book offering. if kids don't come back to comics, we may be down to a very small reader base in 20 years.

finally, maybe this will kill the constant price hikes on books, and i can finally stop bitching about $4 comics.

I think the span of all of this can be judged by one character and that's Wolverine.

In the beginning Wolverine was about 5'3" - 5'5" and popped his claws into anything that moved. Some creators still hold true to that. Now though he's about 6'4", and in movies where he blocks optic blasts with his claws and pimpin' more broads than necessary. My point it that mass appeal dictated development for Marvel and how they were building. What's gonna happen with Disney now in the ring?

I don't doubt expansion, I don't doubt flourishing and I don't doubt development. But there are characters that don't equal disney: Blade, Punisher, Luke Cage, Iron Fist. Those run the risk of never seeing the light of day except in comics. That's fine, but I don't need 6 Iron Man, Spider-Man, Captain America, Thor and Hulk movies and coffee cups. I know there's more to the company. That being the case I even wonder what Pixar would be doing without Disney influence. I mean that got bought for 7 billion by Disney.

I don't doubt expansion. If I had to choose a comic company to be bought for that growth though I'd go with DC. The characters are more befitting the company, but WB runs that. Unless Disney gives Marvel a relatively "free reign" sector so to speak (and this is possible) I'll have my doubts.

I may be speaking before my time though,

Disney also owns Miramax, which produced Kill Bill.
Marvel is doing plenty to screw up their own business. maybe the extra money will help.
we'll see...
the discussion is fun, i know that! thanks for posting!