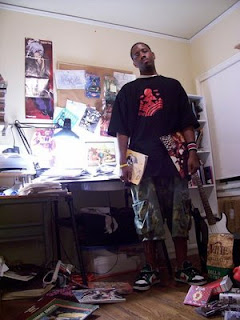 master cartoonist LeSean Thomas is leaving the U.S. for a job at JM Animation in Korea on September 3rd. JM is responsible for animation on shows like Avatar: The Last Air Bender, Wonderful Days, Fist of the North Star, Noein, Macross Zero, Hellsing, Count of Monte Cristo, and is currently producing Season 3 of The Boondocks.

"It really is a dream come true to finally make it overseas and work alongside some of the production crews of animes I’ve come to love over the years," said LeSean, a brother we at ghettoManga look to as a constant source of inspiration for his own work on shows like The Boondocks, Blokhedz, Ben Ten:Alien Force, and his comics and art projects. 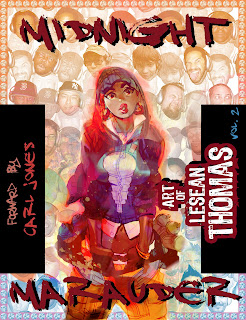 While it is not uncommon for foreign artists to work overseas in Korean animation studios because they are usually attached to an existing project from said country, this situation is unique because LeS is the first American to be plucked from the states to be hired specifically to work in-house at a Korean animation studio. "It’s exciting, but at the same time also a lot of pressure. However I’m confident that I will do my best... Hopefully I wont be the last..."
*NOTE* MY GRAPHIC NOVEL IS STILL A GO"
whew!
anyways, we at ghettoManga wish LeSean safe passage and all the success he can get! we'll be looking for your name in the credits!
holla!
-samax
ghettoManga.com
comics.hipHop.news.art.culture
edited by Samax @ 2:28 AM

Damn, that's dope right there. I know there's a lot of feeling bubbling in dude right now but his resume is crazy so he gonna do his thing thing, Gotta SALUTE the lad

Nice to see you sending him off on here. It's important to note that he's as good as dude as he is talented. I can't wait until he's running his own studio.