If you didn't get enough Black Dynamite

at the movie theater, and the DVD and Blu-ray still couldn't satisfy you, just get ready for Black Dynamite: Slave Island 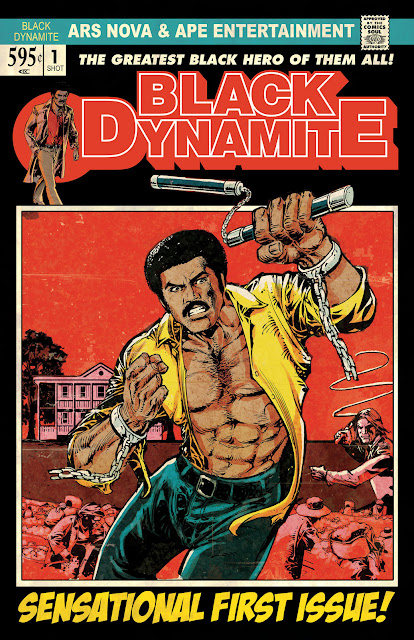 I don't know about you, but I'm digging the Luke Cage homage they got going in the cover art! Here's the Sales Pitch:

Ape Entertainment, in partnership with Ars Nova, is proud to announce the release of the original 48-page one-shot BLACK DYNAMITE: SLAVE ISLAND, inspired by the major motion picture BLACK DYNAMITE.
"Between the streets, Vietnam, and the C.I.A., Black Dynamite thought he had seen it all.  But nothing could have prepared him for his most dangerous mission yet!  In BLACK DYNAMITE: SLAVE ISLAND, the world's greatest Blaxploitation sensation uses his fists of fury to shut down a secret island where The Man still plays by 1850s rules!"  SLAVE ISLAND is based on a story by Michael Jai White, Byron Minns and Scott Sanders. Written by Brian  Ash (The Boondocks), with inks by Jun LoFamia, the book is due in stores April 4, 2011.
You know you don't need to wait till the book's released to put some bread down on it! You can preorder Black Dynamite: Slave Island

this is gonna be dope....wanna see what the response will be.

Yeah, I'm hoping to really spread the word! Share the link where ever you can!