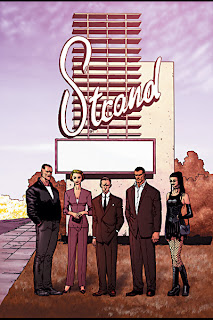 i didn't get any sleep last night... but i took time to read some comics! priorities... among them was the 3rd issue of StormWatch PHD. no, i doesn't stand for Pimpin' Hoes Daily, it stands for Post Human Division... this book is all about the (mostly) human cops who bust up supervillainy that sneaks by those grandstanding pretty boys in tights. at least that's what i gathered... i didn't get 1 or 2, but once i flipped through and saw the gorgeous art of Doug Mahnke (JLA, Frankenstien, Major Bummer), and read a few panels written by comics newcomer, screenwriter Christos Gage (Law And Order, SVU), i was hooked!

In this issue, the team heads to Vegas (no, not for the NBA All-star game...) to train PHD Las Vegas to combat beings " so far above you, they view you as a child. A pet. Or a piece of meat."
of course, while there, they encounter dark, dangerous secrets of the murdering alien bodysnatcher variety... and this is Wildstorm Comics, so there's sex and disturbing violence too... NICE!
if this sounds like your type of hype, peep the CBR interview of series writer, Christos Gage here.
peace.
samax.