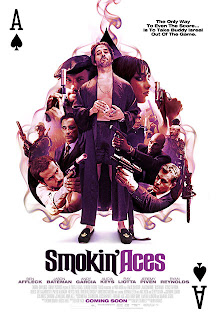 it took me awhile, but i finally got around to seeing Smokin' Aces recently... HO-LEE-CRAP! this is my favorite big-budget movie in a long while! the movie has a fabulous cast, a mixed bag of character actors, veterans, and newcomers (including the big screen debuts of both Common and Alicia Keys) scrambling around to find a spot in a crazy story reminiscent of Snatch or Pulp Fiction. speaking of stories, this one revolves around Vegas magician-turned Vegas gangster-turned Vegas snitch Aces Israel played intriguingly and economically by Jeremy Piven (Entourage, Runaway Jury, Family Man) that just about EVERYBODY else in the movie wants dead!
without telling the whole movie: Aces is about to narc, and in so doing, bring down the entire Vegas mob. the reigning boss doesn't take kindly to this of course, and is offering seven figures to whoever brings him Israel's heart... literally! in order to snitch, Aces has jumped his bond on lesser charges, so in addition to having mad mobsters and freelance hitters gunning for him, bounty hunter Jack Dupree (played by Ben Affleck [Good Will Hunting, Changing Lanes, Chasing Amy]) and his team of bodysnatchers have been tagged to bring in the most wanted man in America. all to the chagrin of FBI agents played by Ray Liotta (Goodfellas, Identity, Narc) and Ryan Reynolds (Van Wilder, Blade:Trinity), who just want to get the silly bastard to trial alive! the small, colorful army of hired guns clapping for Israel includes the lovely and dynamic duo of Sharice Watters and Georgia Sykes, played to my delight by Taraji P. Henson (Hustle & Flow, Baby Boy, Four Brothers) and the magnificent Ms. Keys. the relationship between the militant, outspoken Sharice and the sultry, seductive Georgia would be fascinating even if they WEREN'T also flamboyent

freelance assassins... and they are! they are just the tip of the iceberg of weirdos in this movie that is worthy of a comicbook treatment, but that's quite a beautiful tip...

i could be wrong, but Common may just be the coolest muthafucka alive! Rockin' the goat and the baldie, he was on some ghetto Morpheus shit as Israel's menacing bodyguard Ivy. oh! and stay for the end credits to hear what i assume is a new song by Common, which if i had to bet, i would say was produced by the late J.Dilla (but it coulda been Kanye)... whoever produced that joint, it was outta this world!!
maybe you've noticed, i barely said two words about Piven, who played the erstwhile Buddy Israel... well, he was awesome too, it's just he wasn't really onscreen much! while the flic revolves around him, Israel himself remains a mystery... most of the time, his character is coked out and emotionally blasted. everytime you think this cat is just a lucky scrub, he does something that makes you wonder "is this dude really that HARD that he can get out of this alive?"
anyways... watch this movie. and if you don't make it to the theatre, my man khalid already has it on dvd (bootleeeeeeeg!)
holla!
samax
www.ghettoManga.com
edited by Samax @ 4:30 PM