the Kiss of Death

for the record: there ARE actually comics i read that DON'T get cancelled... NO FOR REAL!!! but as it turns out, NEXTWAVE is not one of them. yep... after just 12 issues, Nextwave went the way of the dodo, robert townsend, and redhead kingpin. i never saw it coming, and another comic i adored got the axe this month. 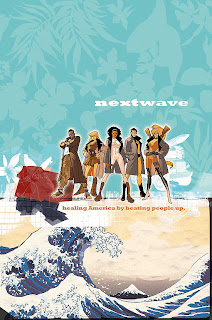 too bad too... this was the funniest book in all of comics! and it was being produced by Marvel (can you believe it?)?!! Nextwave was written by superscribe Warren Ellis (Authority, Global Frequency, Planetary, Thunderbolts) with art by Stuart Immomen (Hulk, Ultimate X-men, Secret Identity), and was easily and honestly the funniest superhero book since Giffen and Macguire's Justice League (Slott and Bobillo's She-Hulk was pretty funny too...). Ellis took a bunch of also-ran characters from marvel's d-list dungeon and put them together on a superhero team, apparently for the sole purpose of mocking all the crappy storylines and ill-concieved characters in the companies 60-odd years of making comics... and it's FREAKIN' HILARIOUS!!!

whether it's surmising about what's in Fin Fang Foom's giant shorts, the revalation that (former New Mutant, current Nextwave team member) Tabitha (aka Boom Boom) really doesn't think, Machine Man's obvious disdain for "fleshy ones" (humans), or Team Leader (and ex-Captain Marvel) Monica Rambeau's constant reminder that she usedta be a team leader in the Avengers, this book takes full advantage of all the weird twists and turns in major superhero comics continuity. On the Authorty and Planetary, Ellis has shown he knows how to strip-mine major comics history for post-modern story ideas, but he takes it to a NEW level when doing it for comedic effect in Nextwave! 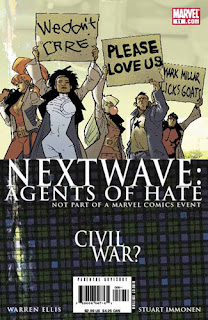 and series artist Stuart Immomen has gone on from being just another Adam Hughes wannabe to develope a distinct, striking art style of his own that is worthy of ripping off! it's clear that this book would be hard to swollow in the hands of a lesser artist, but Stu makes it go down smooth as swedish brandy...
alas, the ride is over, but on the PLUS side, you can go back and collect all 12 issues without TOO much trouble, i'm sure. soon, Immomen will be the regular artist on the RED-HOT Ultimate Spiderman, so you better get them Nextwave issues while you can!
holla!
samax.
www.ghettoManga.com
edited by Samax @ 2:33 PM