"Nothing's strong enough to hold you down forever. Mama was right. Only you can make it better" @Venomous2000 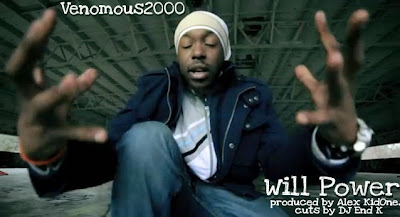 In the interest of starting my day off right, I got this new video Will Power by the mighty Venomous2000 on repeat...

Will Power is the lead single to Venomous2000's upcoming album Will To Power, which comes out June 26th."The meaning behind the name of this particular project..." Venomous says of the new album, "derives from my personal belief in the Human ability to achieve great things."
Hip hop is scary stuff. It's an activist culture. Whether it's Public Enemy, Outkast, or Ice Cube, hip hop inspires action. Dancing, drawing, painting, rapping, shouting, fighting, and more. Hopefully this song spurs you to get something good done today.

Samax Amen draws people, places and things for fun and profit. He is the artist of many great comics you never heard of like Herman Heed, Champion of Children, The Brother and The World As You Know It. He even writes and draws his own comics, like Dare: The Adventures of Darius Davidson, Spontaneous, and Manchild when he gets around to it. Because making comics is hard and stuff, he started GhettoManga as a blog in 2006 and as a print magazine in 2008.
GhettoManga.com
comics. hiphop. news. art. culture
edited by Samax @ 11:58 AM