Okay... I officially fux with THE TITHE! @TopCow is getting it DONE right now! 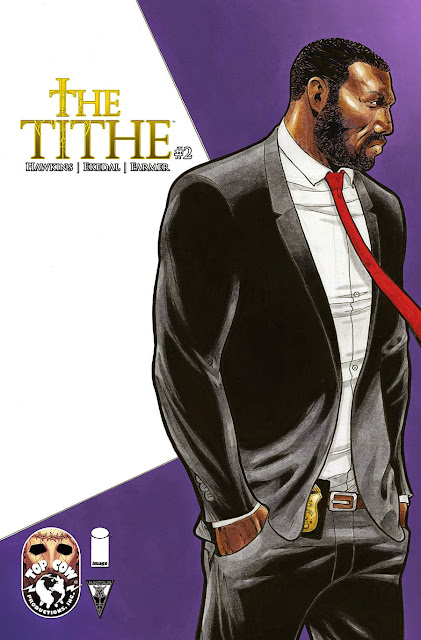 I saw this cover to The Tithe #2 on the stands when I wandered into my comic shop late Wednesday evening, and after being welcomed by the familiar quote from the Old Testament book of Malachi (the one about giving offerings), I couldn't resist its charms.  On one side of The Tithe we follow the Samaritans, a band of tech-savvy crusaders who rob Mega-churches of the loot they fleece from their followers. On the other, FBI agent Dwayne Campbell (above) and his task force are trying to catch them.
Here's some preview pages from the first couple issues 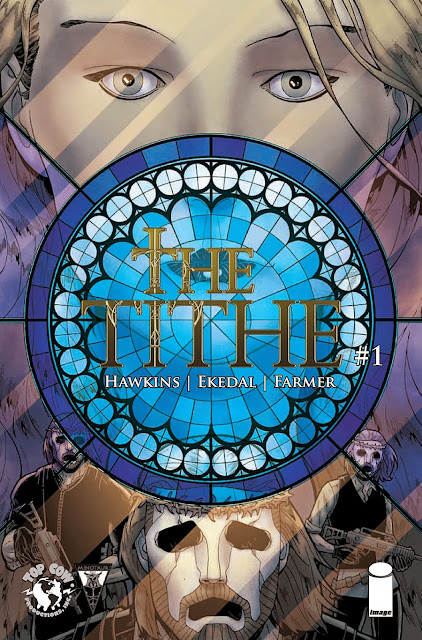 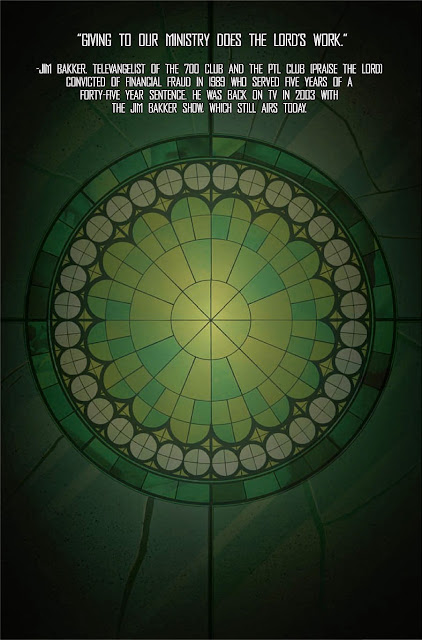 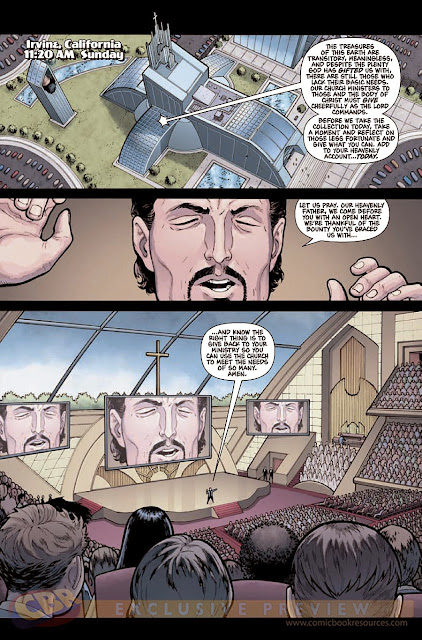 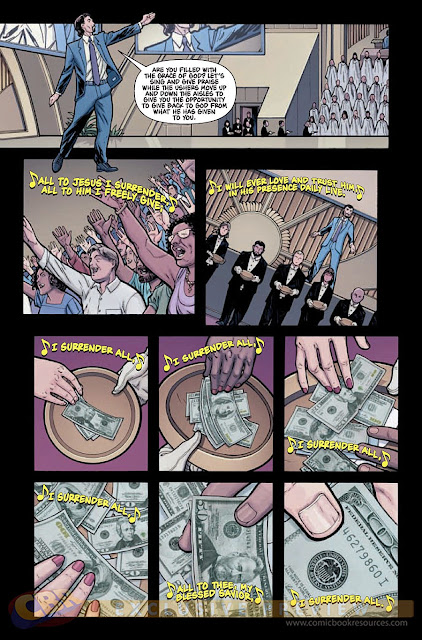 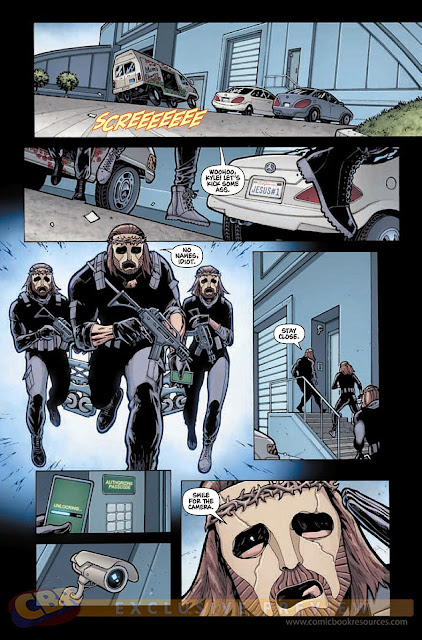 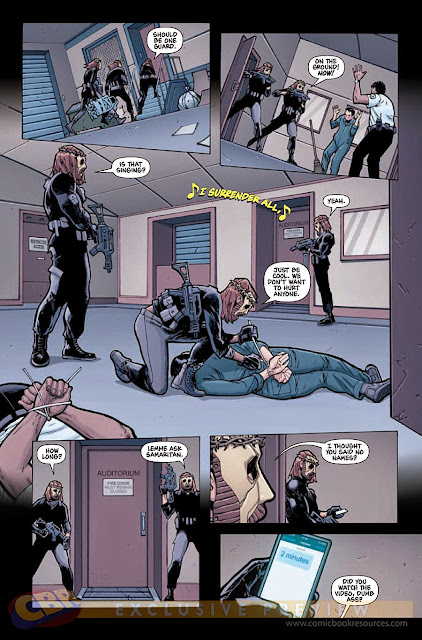 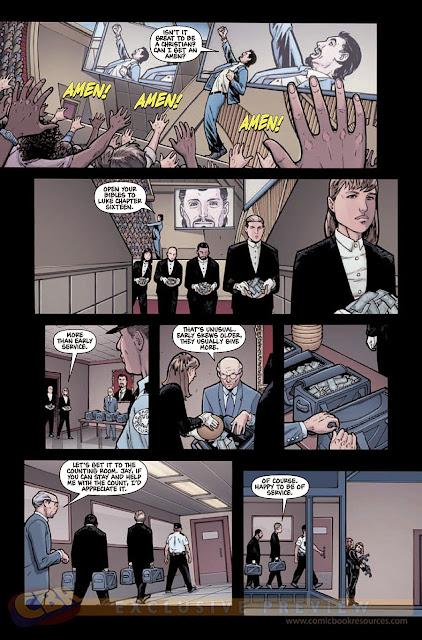 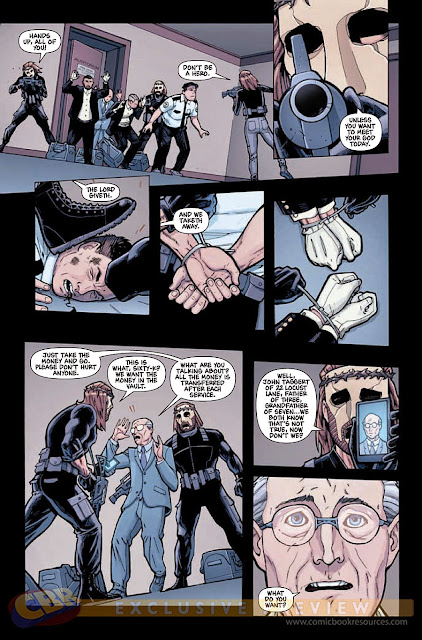 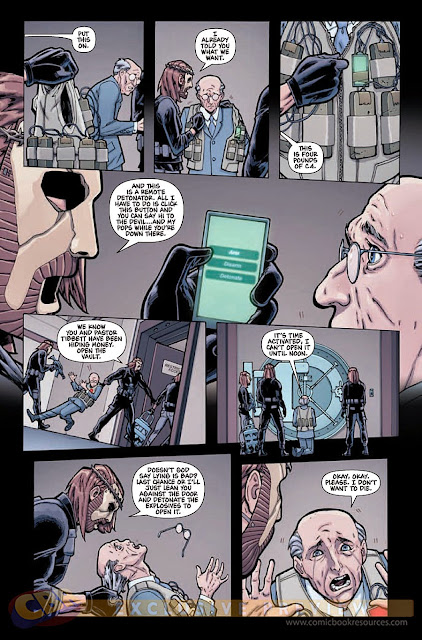 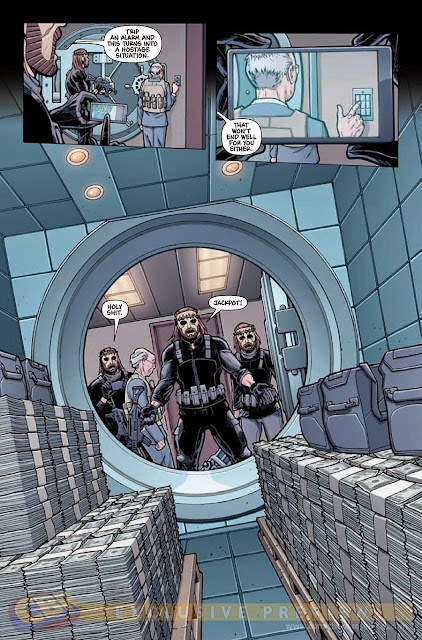 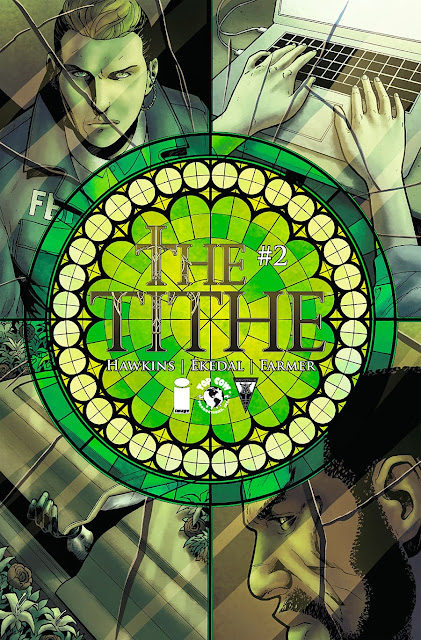 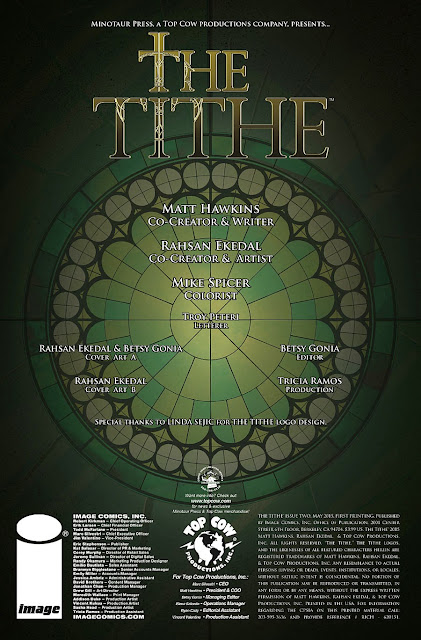 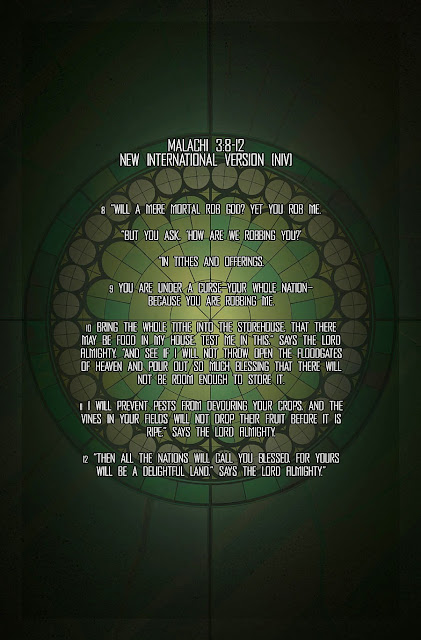 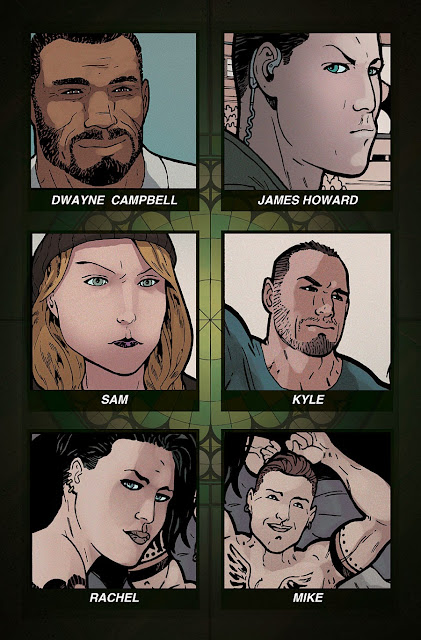 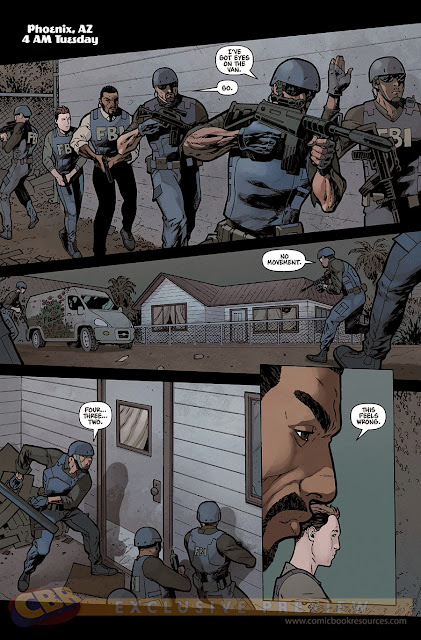 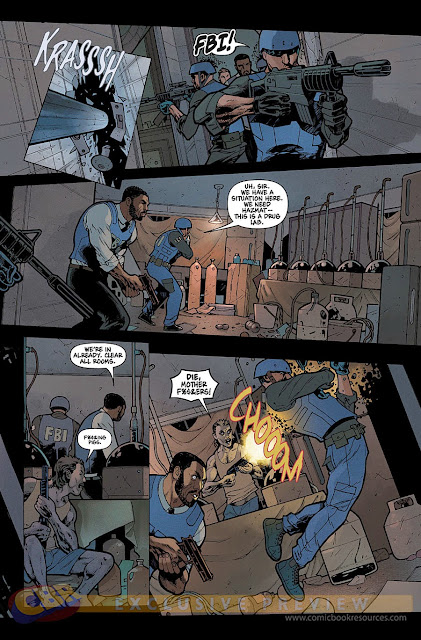 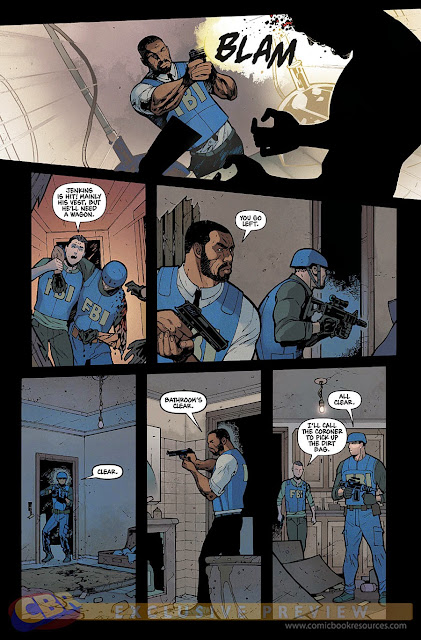 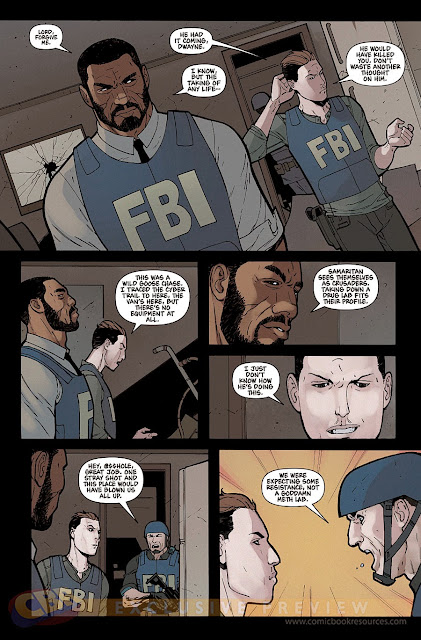 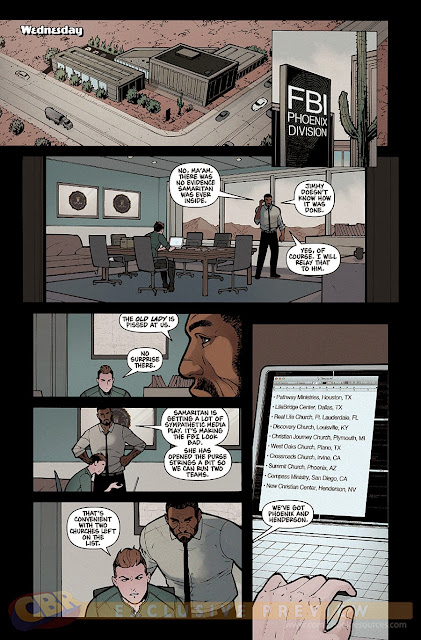 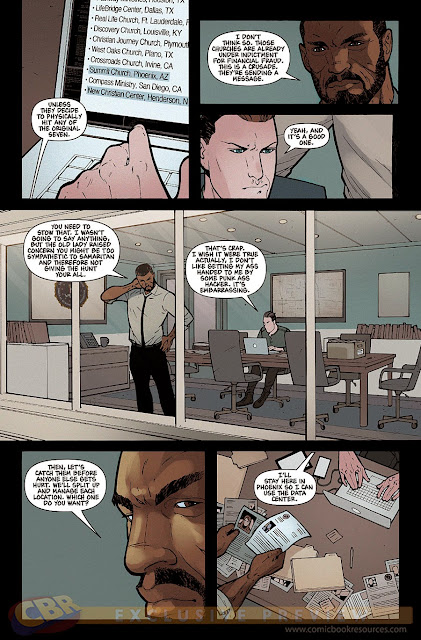 I can promise you I wouldn't have even thought to pick this up if someone hadn't thought to feature the black dude on the cover. It's always good to see someone make a marketing decision at a comic book company.  As we are constantly trying to wrap our heads around the decisions Marvel and DC make in their blind, clumsy stabs attempts at diversity, I will give props to Top Cow for being ahead of the curve, with plenty of diversity on the page, and behind the scenes, whether anyone else gives them credit or not.

Anyways, I missed the first issue of The Tithe, but I still enjoyed number two. After reading the preview pages from the first one, I think I will try and stick around. Compared to the art from the first issue preview, the second issue felt a little rushed, but still good enough. Both issues are drawn by Rahsan Ekedal, who handled the art chores okay. The story by Matt Hawkins (another name that rings no bells) was pretty engaging too. Let's hope the team keeps it moving along.  This feels like a television or movie property, but that's fine, because it means it will make a sweet addition to my graphic novel shelf when they collect it. Top Cow is not the publisher on everyone's mind lately, but maybe they should be. They are turning out lots of unique content, and looking good doing it. You should probably click here to check for more of their stuff if you aren't interested in the Big Two. I know I'm impressed anyways. As for The Tithe, there's two issues in stores now.

Samax Amen draws people, places and things for fun and profit. He is the artist of many great comics you never heard of like Herman Heed, Champion of Children, The Brother and The World As You Know It. He even writes and draws his own comics, like Dare: The Adventures of Darius Davidson, Spontaneous, and Manchild when he gets around to it. Because making comics is hard and stuff, he started GhettoManga as a blog in 2006 and as a print magazine in 2008.
GhettoManga.com
comics. hiphop. news. art. culture
edited by Samax @ 12:43 AM