Ashley A. Woods is returning to her creator owned fantasy comic, MILLENNIA WAR 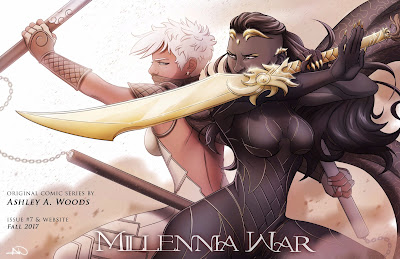 I love to see independent artists succeed, and I have been a fan of Chicago-based cartoonist Ashley A. Woods for a long time.  As such, I am fired up to see the announcement that she is soon returning to her creator-owned fantasy comic Millennia War.

Ashley has been slugging it out for a while now, and has gotten more and more adept at rendering badass chicks doing badass things as time has gone by.  Let's hope some of the fans of comics she has worked on like Niobe: She is Life and Ladycastle have become real fans of her work and decide to buy into her Millennia War stories.

I already enjoyed Ashley's work back then, and she has improved by leaps and bounds over the years.

Anyways, I don't have any news for you right now, but stay tuned and I'll keep you posted when I know more.

Email ThisBlogThis!Share to TwitterShare to FacebookShare to Pinterest
Read More About: Ashley A Woods, fantasy, ghettoManga, She Go Hard