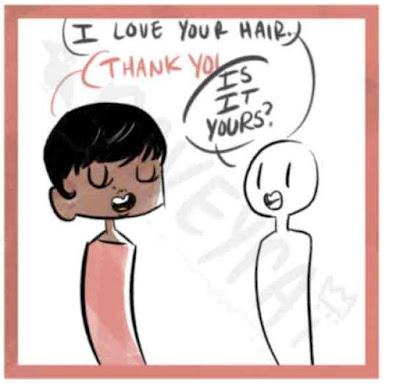 Very few topics go from micro to macro faster than conversations about a black woman's hair.  The geopolitics surrounding black women's coifery will stagger you if you let it. 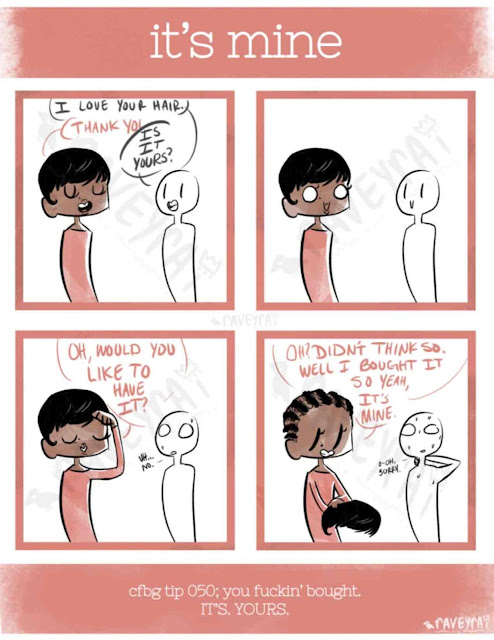 A few months ago, a black dude randomly got in my mentions on Twitter to remind me that "not all black women wear afros" because he was offended by a drawing I posted (I guess?).  Although it is well known that I have a thing for sisters wearing their natural hair, I don't think he looked through my work enough to know that before commenting.  I think he just wanted to fight on the internet. I have long considered myself above arguing about shit like that on the internet (maybe my male privilege is showing?), so I didn't respond.  It's been a very looong time since I felt the need to have an opinion about how women should or should not wear their hair.


One of the benefits of diversity in storytelling mediums is the joy of watching women tell their own stories and share their own unfiltered perspective.  Raven's hilarious webcomic CFBG (care free black girl) is a great place to get a black woman's perspective in her own words.

I tend to second guess almost everything I do in fear it's a mistake but then I figure it’ll just be a lesson I’ll grow from. (🎨:@raveyrai) pic.twitter.com/F5byO8XIEI
— cfbg tips; (@cfbgtips) April 28, 2017


In CFBG, Raven speaks on issues of race, misogyny, self-care, and so on with a complete lack of pretension.  I check in on CFBG regularly, just to see what she's talm'bout.  But that's just the tip of the iceberg.  Raven is an incredibly versatile illustrator, cartoonist, and culture critic.  You should get familiar with, and support, her work.

Have great weekend!
-"some AX"