I read book one of the futuristic indie comic The Fringe awhile ago. i was drawn to it because of the drawing style of writer-artist N. Steven Harris (Aztek), whose quirky yet professional art reminded me of the blocky figures and well-detailed environments of John Romita, junior. the series' super-powered, one woman anti-terrorist weapon looks like she could have stepped right out of the beloved Daredevil or X-men comics of my youth, but also looks fully, delightfully BLACK! so when i decided to order some books from IndyPlanet, The Fringe was on the short list. still, after i read the first issue, i wasn't sure if i liked it or not. 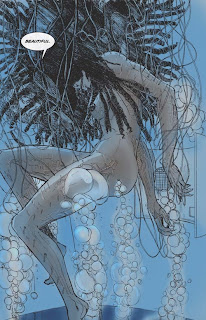 the book one centered on Jasira (a member of the Fringe, a group of insurgents rebelling against an oppressive government), who has been captured and transformed into a woman of mass destruction that the evil corporate government plans to use against the rebellion... but who the rebellion is and why they are rebelling wasn't addressed to my satisfaction. i didn't know enough to decide if i liked the book or not... i decided i'd read issue 2 before making up my mind.

well, i read #2... and it was DOPE!!! this issue shows the events leading up to Jasira's capture and introduces many important characters from the Fringe Insurgency, and hints at its structure and customs. Harris lays out just enough info to keep it interesting, and fills the book with various kinds of bone-crushing action to keep it spicy! having seen what i need to see, i can recommend folks to buy the Fringe over at IndyPlanet, but i must encourage you to buy both issues to get started, because it helps to have both to lay the foundation that'll have you anticipating more!
i'll be right there withcha!
uno.
-ghettoManga.com
edited by Samax @ 11:14 PM