"No one is born hating another person... If they can learn to hate, they can be taught to love." -Nelson Mandela

As a young teenager cutting his teeth on conscious hip hop (back then, we just called it hip hop) and consuming books and movies about super-sized activists like Malcolm X and Martin Luther King, there was a temptation to think of Civil Rights activism as the contents of dusty old tales of yesteryear, in which such men were transfigured to the stature of Moses or John the Baptist: righteous supermen who gave their lives to the slaying of cultural dragons and turning the course of mighty rivers of ignorance with their bare hands.

While I lived under the safety and opportunity these martyrs' lives had bought, I was introduced (by Public Enemy, as it turns out) to the story of Nelson Mandela, a South African activist who had been imprisoned my whole life for demanding equality for the black majority in South Africa. Mandela became the symbol for activists around the world calling for the end of Apartheid. Unlike many other cultural supermen, Nelson Mandela was still alive when he became an icon, and as such he was able to drive the narrative the world was writing about him. In the eighties, many offers were made to release him if he would renounce violent resistance to Apartheid, which he refused. While I was in high school, Nelson Mandela left prison on his own terms. Instead of dying to end Apartheid, he killed and ate the corpse of the monster, becoming South Africa's first black President in 1994. Far from joining the chorus of righteous martyrs, Mandela became the face of simultaneous humility, dignity, and victory.

Anyways, I've been watching with the rest of the world as Mandela's health declined in recent years. Mandela died at his home in Johannesburg, South Africa, on December 5, 2013.  Even at the ripe old age of 95, it was still hard for those who love his life to let him go. During his life, Mandela was a legend. I can only imagine how his story will continue to inspire activists and revolutionaries around the world.
r.i.p.
-samax
Samax Amen is a professional cartoonist, illustrator, painter and indie publisher. He earned a Bachelor of Fine Arts degree in Painting and Drawing from the University of North Texas in 1999. Samax and his work have appeared in The Dallas Morning News, the Quick, The Observer, The North Texan, and BLACK COMIX:African American Independent Comics, Art and Culture. His magazine GhettoManga Quarterly and his blog at GhettoManga.com have a growing readership in the US, Canada and Europe.
GhettoManga.com
comics. hiphop. news. art. culture 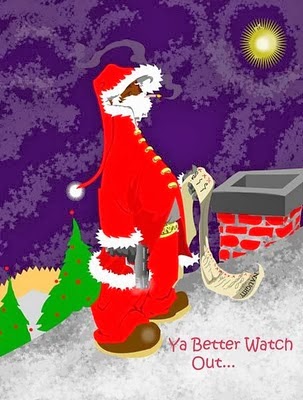 The thing that has always struck me about Mr. Mandela was that he appeared to have no bitterness.

If, after being in prison for the best years of his life, he reacted angrily and violently, it would be understandable.

Instead, he did the opposite.

All in all, I believe he did more for his homeland and the world than the likes of Ghandi could ever dream.

No doubt. It will be interesting to watch how history remembers Mandela.