New episode of "Oh, Jay..." by Jay (@Doctor_Hue) Kelley and @SamaxAmen, plus a few words about Colin Kaepernick 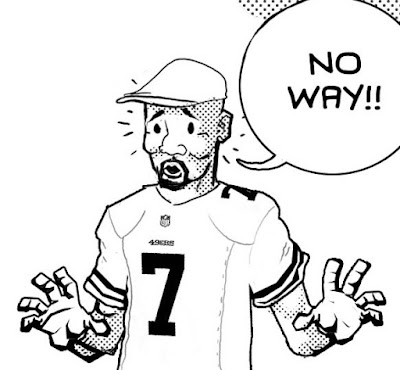 Yes, there really IS a new episode of Oh, Jay... by underground comix writer and humorist Jay Kelley (with art by me) ready for for your consumption below! 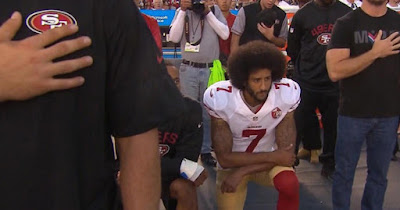 “As much as I don’t agree with it, and as much as a lot of people don’t agree with it, that is his right,” said Army veteran Jeremiah Thompson, speaking of Kaepernick, the 49ers backup QB who refused to stand during the National Anthem as a protest against police brutality and institutional racism in America

I haven't been watching football or ESPN much lately, so I found out about Colin Kaepernick  via watching people argue about him on social media.  I grew up in a military town.  All the father figures of my youth (including my dad) are Army veterans.  I was raised to love my country and respect the men and women who serve in its armed forces.  However, I was also raised by my mom to think for myself, and taught by my history that living in a free society means that freedom of expression is a part of the national identity.
In high school, I was reprimanded more than once for sitting during the National Anthem or abstaining from the Pledge of Allegiance.  On those occasions, I wasn't looking for attention, or to disrespect anyone.  At that moment, I was objecting (in my heart, silently) to something our government or culture was doing at the time.  I never spit in anyone's face.  I never barked a manifesto at anyone.  It was a quiet expression of disapproval.  Nothing more.
Kaepernick's humble act of disapproval is only as big a deal as those who object to it make of it. The right to object is a human right.  I don't know anything about Kaepernick's football skills, but no one would notice his protest if not for those protesting his protesting.  As it is, he has become famous because of all the outrage.  He doesn't seem to me to be seeking fame, but he is not afraid of your scorn either.  And that scorn puts a spotlight on him, and gives voice to his objection, bringing more attention to his worldview.  What kind of sense does that make?  If you really hate what he's doing, your best move is to ignore him.

But I'm not holding my breath...

Kapernick mad the cover of Time magazine. He got the support of several people in the military. I thought Coach Steve Kerr (Golden State Warriors) and Coach Gregg Popovich(the Spurs) provided public responses to the people protesting his protest.

So what you're saying is this post is mad late, and shows that I am not in touch with media coverage on the subject.

You are correct, sir! I wanted to respond for some time, but just got around to it. But it's good to know that someone actually still reads this blog! lol!