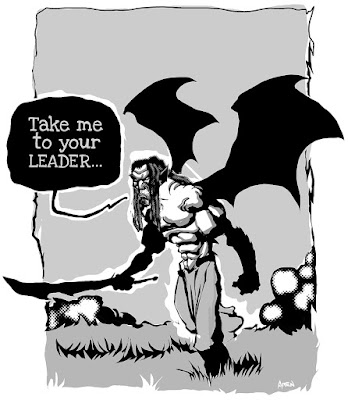 This drawing has nothing to do with Theory Hazit's new album The Soul Chops, but that's what was playing while I drew it, so here you go.  And uh, listen to the record below.
Take Me to Your Leader is a warm-up drawing.  Something wasn't working right in Photoshop, so I was just screwing around trying to fix it.  I've been drawing semi-demonic looking characters a lot for a client project, so this kind of just slid out.  It helps that I am way past the red line on saccharine sweet Christmas movie schlock, so drawing angry monsters is like therapy.

I also think I was thinking about that Brandon Graham comic-within-comic "Barbarian Revenge".
Anyways... Getting back to Theory Hazit.  This record The Soul Chops is dope as hell.  check it out via the magic of Bandcamp.

Theory Hazit is one of the limited group of cats I dig for beats as well as rhymes.  The Soul Chops is mostly a beat tape though (He only rhymes on one track, and SPOILER ALERT!  It's dope).  It's a great record to draw to... 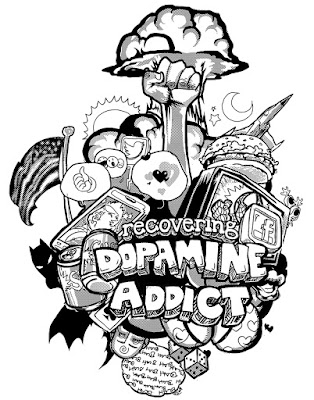 So I drew Recovering Dopamine Addict while I was bumping the album.  I started this drawing a while back... Well, I came up with the idea and drew the letters.  It was initially inspired by this video:


Dopamine is not a drug, it's a neurotransmitter that is released in the brain as a reward for achieving a goal.  Very effective when used right, but bad when used wrong. Many addictive drugs increase dopamine activity, but lots of seemingly harmless things (sugar, social media, video games, etc) effect our dopamine levels in similar ways, and can be linked to anxiety and depression.

I have been struggling with depression and motivation problems for years, and my self-help research sort of reached a tipping point when I saw this video.  I like the concept of dopamine addiction as a mental framework to understand what's going on with my brain, and as a starting point for hacking my way to where I want to be.  My healing process involves lots of meditation, hip hop music, and of course, drawing.

Friday night, under the influence of Theory Hazit and tortilla chips I banged out this piece, which I am very happy with.  I am gonna put it on teeshirts, stickers, posters, etc. so stay tuned for that.  For now, I am headed back to the drawing board to bang out some commission work.  Thanks for reading, and have a great weekend!

SHEEEEEEEEEIT!!!
I forgot about Theory Hazit! Gotta cop that!!!