My concerns about STORM, and 4 things @Marvel should do about it 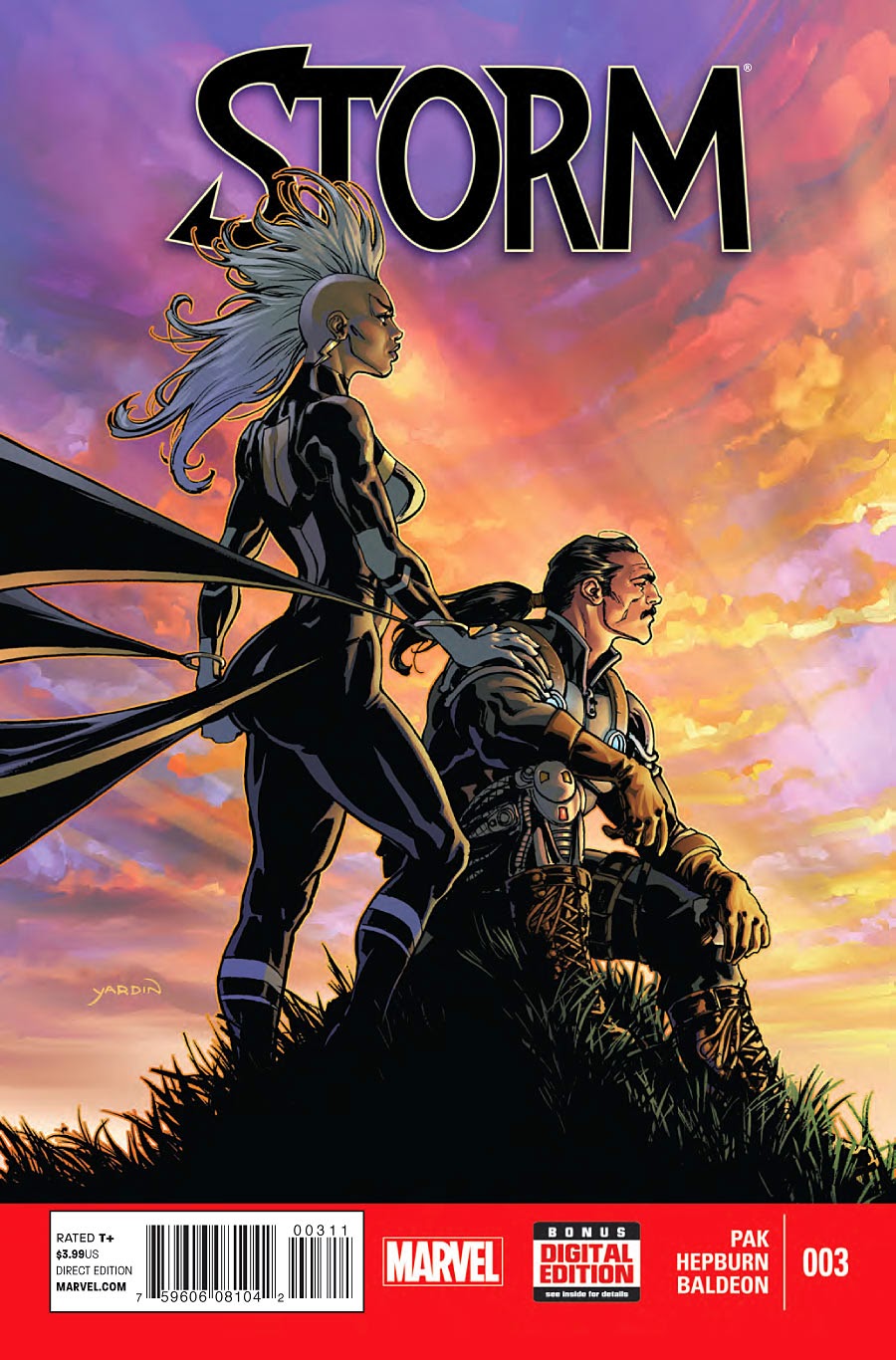 I bought the first couple issues of STORM, the new ongoing series about Marvel's most prominent female super hero. I enjoyed them both, especially the first one. But there's definitely something bothering me about this series already...
Here's  the sales pitch:
• Long ago, after she was worshipped as a goddess on the plains of Africa, Storm was stripped of her mutant powers and fell into deep depression. A brilliant inventor named Forge came to her rescue and nursed her back to health, showing her that she is so much more than her superhuman abilities. And a romance blossomed between them. But it was a love made to be broken…
• Now, years later, Storm has the powers and stature of a goddess once more, and she is reunited with Forge. But what does fate have in store for the pair this time? 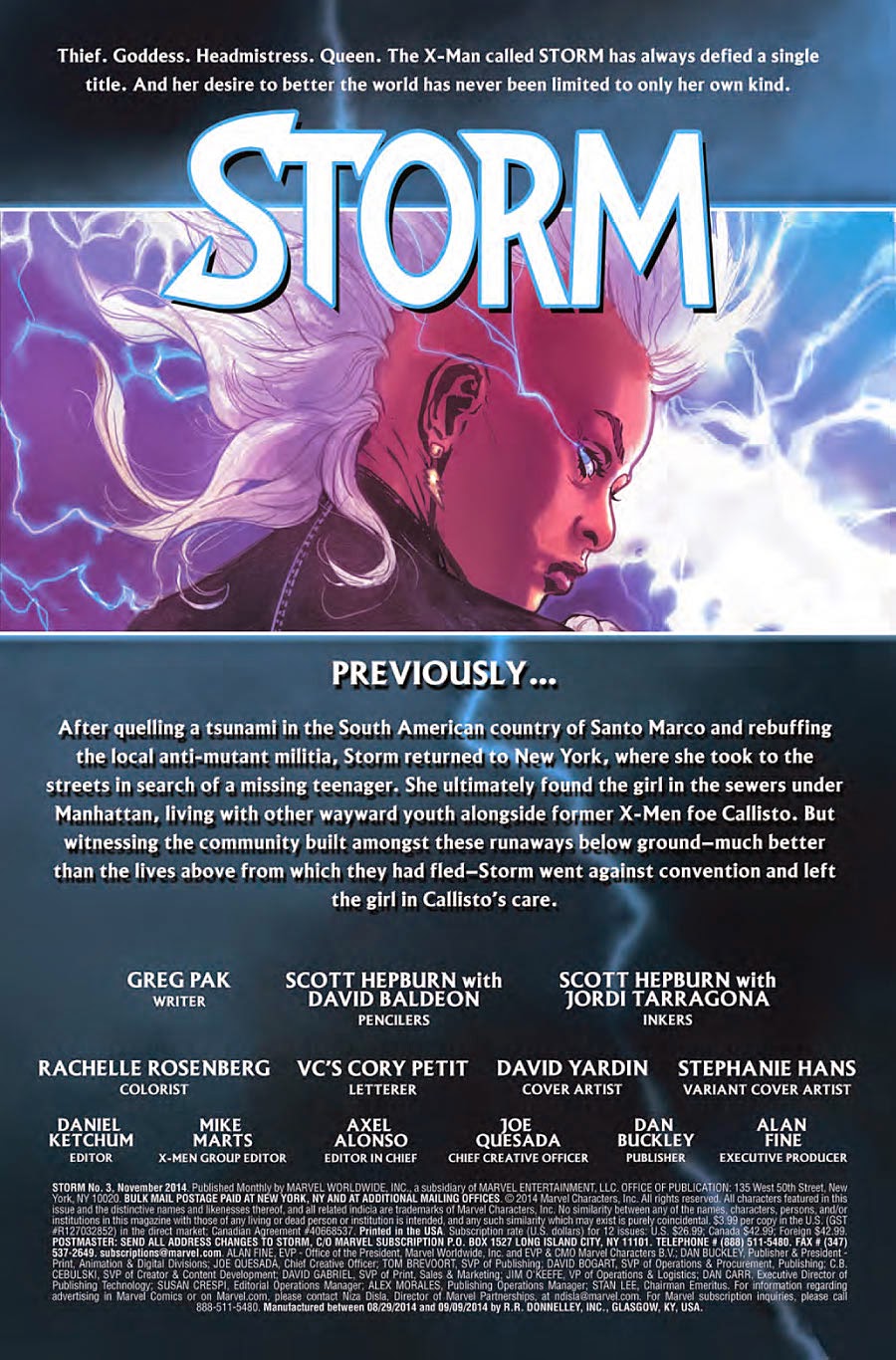 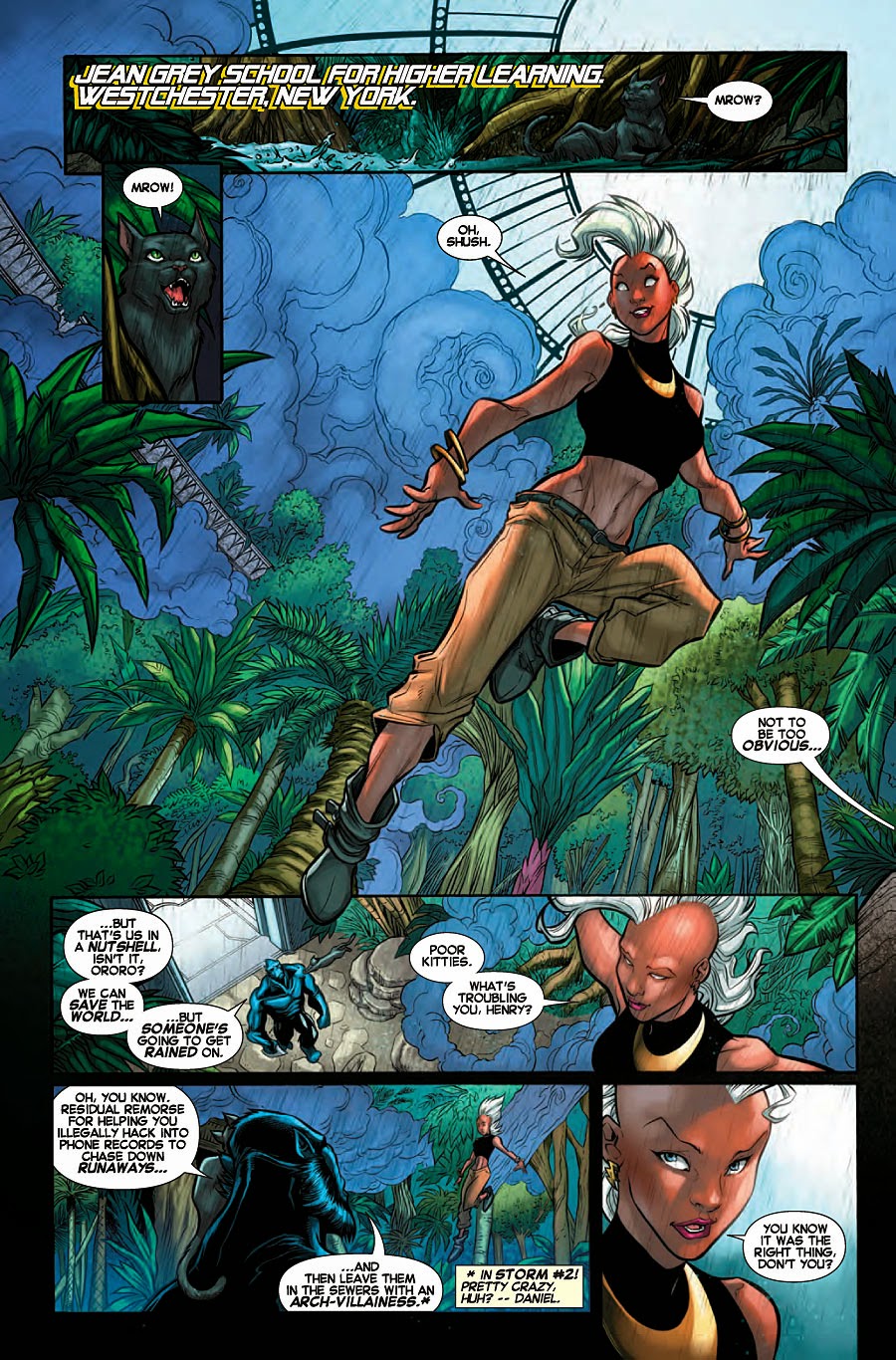 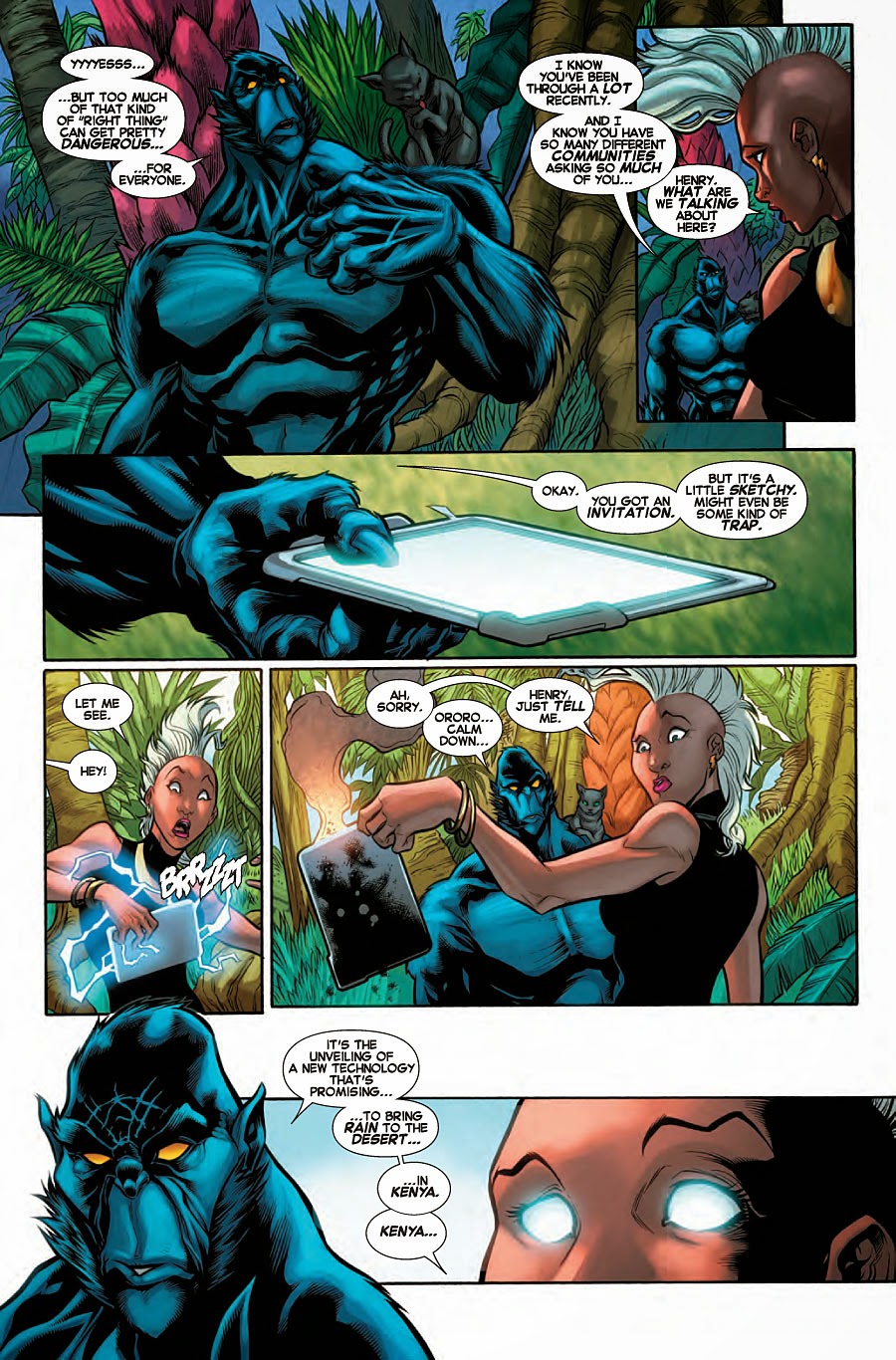 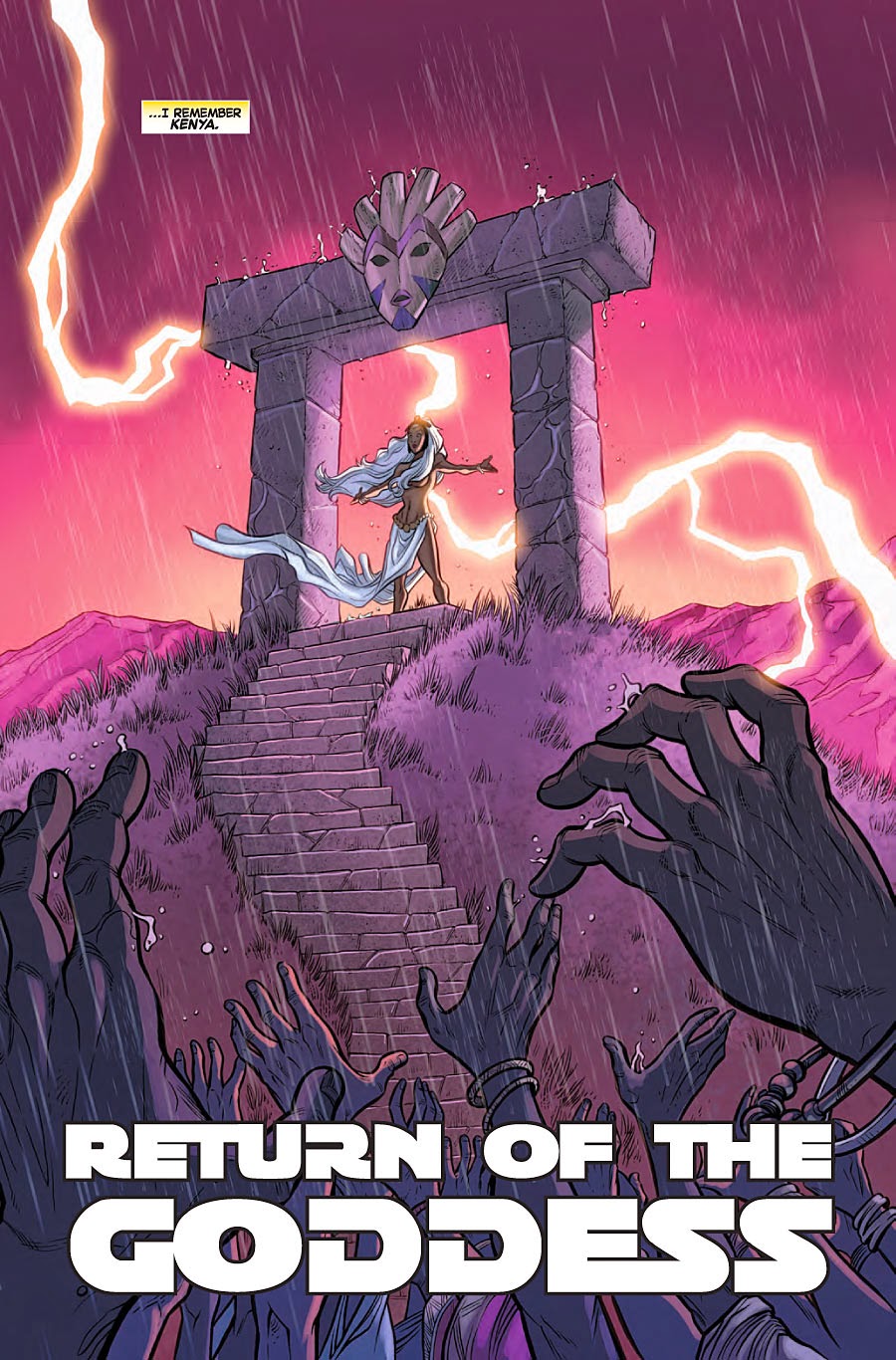 I will just go ahead and say it: I'm afraid Marvel is making a half-assed effort with this book. Fill-in art-by-committee already? On issue THREE? As I said before this series got started, now that we are seeing both major comics publishers taking serious (if somewhat clumsy) stabs at diversity, it's very important that STORM be an awesome book. After all, Storm is the most enduring black superhero in Marvel's portfolio. If  Marvel is really serious about diversity in their comic lines, it's important that the characters of color they already have get top-notch books. I can appreciate creating new characters to fill legacy positions Like Miles Morales and the new Ms. Marvel, and I will reserve judgement on Falcon as Captain America, but if Marvel can't give an iconic, popular and significant character like Storm a high-quality book, readers will have little choice but to dismiss this diversity initiative as a gimmick.  I am not at that point yet, but I can see it coming. I don't think I'm alone in seeing Storm as being significant, and right now, this book appears to be at risk of failing. Here's what I would do if I was brought in to keep this train on the rails:
Those would be my main areas of focus. Whether Marvel is aware of it or not, STORM would be a dream gig for many writers and artists. If Pak and Ibanez are not prepared to turn out the best work of their careers in a timely manner on Storm, they should let someone else have the chance. Storm is too important to get another lackluster effort. A female writer would be great, as would a male writer of color. And the list of artists who would go overboard to get it right is not a short one. Afua Richardson, N. Steven Harris, and Ross Campbell come to mind immediately. But like I said, I think Pak and Ibanez are up to the task if they want it. As it is, I just feel like this book is kinda wobbly. Maybe I'm wrong. Feel free to let me know what you think.
For the record, I still plan to buy Storm #3 which comes out in stores September 24th.

Samax Amen draws people, places and things for fun and profit. He is the artist of many great comics you never heard of like Herman Heed, Champion of Children, The Brother and The World As You Know It. He even writes and draws his own comics, like Dare: The Adventures of Darius Davidson, Spontaneous, and Manchild when he gets around to it. Because making comics is hard and stuff, he started GhettoManga as a blog in 2006 and as a print magazine in 2008.
GhettoManga.com
comics. hiphop. news. art. culture
edited by Samax @ 1:35 PM

Pretty much in agreement on all points. The art shift is worrying, I've enjoyed the issues because they remind me why I like Storm, but I don't yet get a sense of the overall direction.

But just wanted to note, Greg Pak is Asian-American (or half-Asian? I think?) so he is a man of color. It'd be cool to also see some folk of African descent get a shot, but that's a much wider discussion. :)

I don't trust Marvel to make it more than a gimmick, but so far it's entertaining, and I'll hang with it as long as it's solid.

I'm of the opinion that DC's diversity is a gimmick. But, at least they're trying harder than Marvel.

I'll believe in DC more if they bring back more of Milestone's characters, especially the Blood Syndicate.

+Trey Jackson- Good point about Greg Pak. I'm happy with the book in general, but I don't think Marvel is taking it seriously, and that's problematic. I hope STORM lasts long enough to get a black female writer to be honest. I'm not holding my breath though...

+Phillip Magana- I feel the same way about DC. They are totally missing it with the Milestone stable. Milestone was so ahead of its time, neither publisher has caught up yet.

Thanks for your comments, guys!

I wish they'd follow those rules for EVERY Marvel book. It seems like very few titles have consistent teams or don't get swept into the crossover vortex. Marvel has really lost me in these past five years with the whole "We'll launch and make it look hot for 6 issues thing".

Honestly, to me lately it seems like Marvel is more concerned with keeping characters in people's faces until they make some kind of movie representation. So, creative teams tend to be a sloppy structure these days.

I love the cover designs, and I agree with what you're saying. Thing is, I often think Marvel doesn't see the same importance With Storm as you do. Black Panther, Falcon, Nick Fury cool. However, out of both companies, DC and Marvel, not many see, or rather, don't know how to market a black female, or TO a black female. Times are changing though, so we shall see.

As far as cover design though, I go with Eric Canete of James Jean, but I'm biased

I agree that a consistent artist/team is necessary, and having a fill-in this soon isn't a good sign. But they need to find someone who can do monthly, you don't want to switch to bi-monthly, I think that would hurt the title more than fill-in artists would. The ADHD attention span of the modern comic-book buyer might just forget the title altogether if they have to wait two months.

By the same token, even though I loath mandatory crossovers as well, they actually seem to work for modern comic-book buyers. They want crossovers and interconnectedness, that's why the company's keep doing it. If events in the other X-Men titles aren't reflected and referenced in STORM, and vice-versa, then buys may feel like the title "doesn't matter" and therefor can just be skipped.

So far I liked the first two issues were pretty much standalone self-contained stories, but maybe you're right in that Pak needs to start showing that there's a clear direction for this series.

So, here's the thing. I think this is a passion project for Greg Pak and while you have some point about the direction in the two issues, I think they also read as somewhat of a mission statement. She's portrayed as a woman with both physical and sexual agency, with her own agenda and priorities, and still emphasizing the connections to the rest of the world.

As for Marvel, the thing that Storm has working against her right now is that she's an X-Man, which means she will not be appearing in a Marvel movie in the foreseeable future. So, their decision to make this book can't really be seen as an attempt to cash in. There's nothing to cash in on. Hopefully, that means they are interested in making something of the comic itself. I love the first two issues and I trust Pak to have a long term plan. I'm hoping Marvel continues to support it long enough to make that happen. I genuinely think this book is great and I know several other Storm fans that do. I'm just hoping they can stick the landing.

@Gorilla- Yup. All of what you said. LOL

@B_Steelo- I love Canete. He draws an awesome Storm. I actually think James Jean would be perfect as a cover artist for Storm. He is so sharp and imaginative, but with a very mainstream appeal.

JR- I guess it would hurt sales to go bi-monthly, but only in a short term way. In the long run, it makes more sense to make an awesome comic that holds together in trade paperback and hardcover formats. A story drawn by one awesome artist will hold up better than art-by-committee. (I'm looking at YOU Grant Morrison's run on New X-men!)

As for the crossover thing, I agree. I have long maintained that mainstream publishers' commitment is not to growing reader base, but getting existing readers to buy twice as many books. Crossover marketing is all about creating one massive company-wide narrative that encourages and rewards hardcore fans who will buy as many books across the line as possible. The problem is that it is at the expense of making good individual titles. Which is why I don't buy them that much.

@ Jermey- I agree about Pak's writing, and that's why I plan to keep buying Storm. Coming from me, that is saying a lot! Hopefully, they can get the art thing under control. If not, I will happily draw it! (((airhorn)))

@samax/Philip Magana - nobody's even CLOSE to where Milestone was. I remember reading an interview with John Rozum though where he said DC forbade him from putting Blood Syndicate in Static Shock (even though they allowed him to use Hardware) so I'm not only not holding my breath, I'm kinda done with DC on that score.

I'd really love to support Milestone in doing something in any medium that's not affiliated with DC (I think they just have the comic publishing deal with them–DC doesn't fully own Milestone characters but I'm not clear on how that works).

But that Blood Syndicate mashup madness of superheroes, urban life, hong kong flicks, b-movies and novelas hasn't even been attempted since. That was one of my favorite Milestone joints.

I was really taken with Shadow Cabinet. That was definitely my favorite. But yeah, Blood Syndicate was insane.

I loved Shadow Cabinet as well. That, Blood Syndicate and Xombi were my favorites.

DC actually did a Xombi story for the New 52, but I never read it. I heard it was good.
http://www.comicbookresources.com/?page=preview&id=8448