Dawud @Anyabwile of Brotherman Comics, the Drawing From The Soul Lecture Series and more on the next @BlackComicsChat 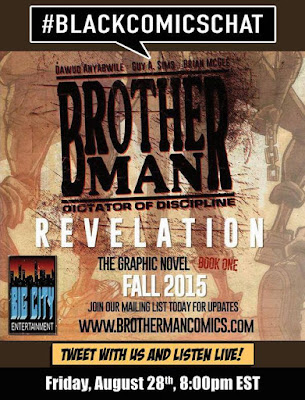 I finally caught up with the cool kids last week and listened to the #BlackComicsChat Show, and it was awesome! In fact, I posted a Tweet that was actually read live on the air, which I didn't expect...

*still waiting on that avalanche of pro-Liefed emails... *
So even though the dude who read it totally massacred my name in front of a nation-wide audience (it's pronounced "some AX"), on balance it was a totally cool experience! But enough about me... I just wanted to give a heads-up:

That dude Dawud Anyabwile (tune in for proper pronunciation!), co-creator/artist of the game-changing, hip hop infused Brotherman comic book series, posted the flier announcing that he will be on #BlackComicsChat this week (hopefully alongside co-creator/writer Guy Sims, and coloring genius Brian McGee) talking about the long-awaited original graphic novel prequel Brotherman: Revelations.
So I'm gonna invite you to tune in to the live show & tweet along with us on Friday August 28th starting at 8pm east coast time. 'Cause I'm part of it now, so I can invite people. That's how the social media thing works, seen*?