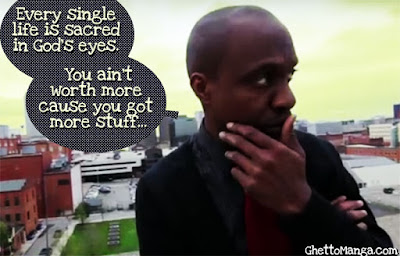 After spending the evening handling some business at my homeboy's crib, we were building and destroying over pizza and fresh raps when this video for Perspective by Columbus, Ohio based micro mogul Blueprint came on...

Dog... This joint (from his 2014 album Respect the Architect) is some Grown Man Rap Shit right here. This joint had me choked up. I don't even have time to tell you (lots of drawing to do), but Blueprint is that dude. I used to write about his music all the time, but as social media took away more of my time, I guess I stopped posting about him here. That's something I'm correcting, starting now.

Samax Amen draws people, places and things for fun and profit. He is the artist of many great comics you never heard of like Herman Heed, Champion of Children, The Brother and The World As You Know It. He even writes and draws his own comics, like Dare: The Adventures of Darius Davidson, Spontaneous, and Manchild when he gets around to it. Because making comics is hard and stuff, he started GhettoManga as a blog in 2006 and as a print magazine in 2008.
GhettoManga.com
comics. hiphop. news. art. culture
edited by Samax @ 4:47 PM