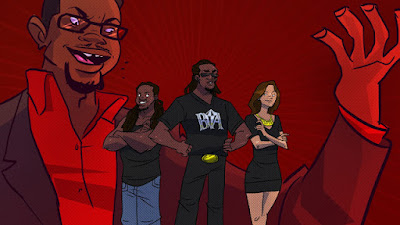 Malik Matthews was not much of a man, and when he gets superpowers, he's not much of a superhero, either. But the origin/debut episode of Black Angus -the low budget webseries that will follow the exploits of this plain-clothes crime fighter- is a hilarious parody of superhero tropes seasoned with hip hop style and irreverence.
"I was tasked by the good people at Green Bench Comedy to do the art for the new web series Black Angus..." Smack explains on his blog. "A tale about bum dude who gets superpowers through tainted Sloppy Joes. The illustrations I was tasked to do range from Black Angus saving the day to him hanging out people like Drake or Miley Cyrus."
You'll see a bunch of Smack's in the opening sequence...

Black Angus actually made me laugh, which is good, but I would support it even if I didn't like the writing, just to see if they are going to continue to use Sean's art in future episodes. 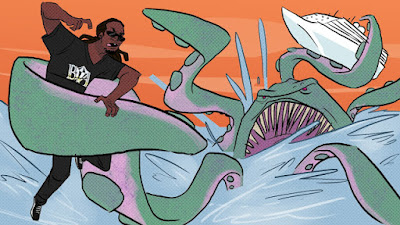 These drawings show how drawing gives storytellers the potential to tell tales that would take a huge budget, even to fake with green screen and digital effects. Because the show is a comedy, I think viewers would accept -and even come to anticipate- interludes that utilized still drawings or even simple motion comic-style animations to enhance the story. 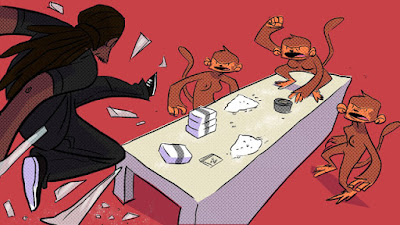 I am praying that there is an episode based on this one... but only if it is your will, Lord.

Anyways, as an illustrator myself, I love seeing people reaching out to artists like Sean to solve problems for them, and seeing him make it look easy.
Great work, SMACK! And peace to Greenbench for tapping Sean for the job!