This album will drag you kicking and screaming into your future by acknowledging your past. 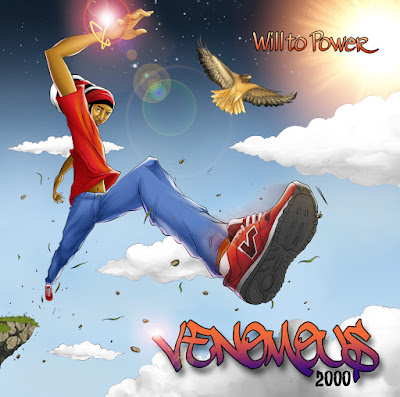 "All you need is within you.The legacy continues.
My spirit will not die.
It's like the Force that's in the Ginyu..."
-Venomous2000
If you believe spoken words have the power to create life and death, no one is more powerful than a talented rapper, whose words are circulated, memorized and recycled to the point that people are more likely to paraphrase a rapper than a philosopher or politician to win an argument. Emcees color our memories, clarify our convictions, and provide a framework for our future development.
Don't believe me? The next time you start to tell some kid to pull his pants up, just shake your fist at Eazy E's ghost instead. Thankfully for us, that dude Venomous2000 returns to use his powers for good and not evil again on his new album, Will To Power.
Venomous tours the world and drags the internet collecting fans who subscribe to the pillars of hip hop culture, and has been feeding their collective need for that true school rap shit for a long time. By maintaining high standards of lyricism and integrity, this New Jersey native has earned the respect of collaborators from around the globe who help him fill out his records.  Will To Power benefits from Venomous' team-up habit, with production by Robot Orchestra (Germany), DJ Manipulator (Boston), Rav. P(New Jersey), Alex KidOne(Greece), Marshtini (Norway), Trilian (Serbia), Sizemen (France), Mentplus(New Jersey), Chopzilla (Indianapolis),The Soul Plugger(Stockholm), & Astronote (France).
I generally prefer beatsmith/emcee teams over using a rotisserie of producers, but Venomous has used this method on other records to great effect, and once again his vision for the record holds it together well.

In the video for Force of the Orisha, we get a look at this emcee's spiritual belief and practice, which gives the album a lot of it's energy. According to our friends at Wikipedia, the Orisha (spelled Orichá or Orixá in Latin America) are spirits that each reflect one of the manifestations of God (Eledumare, Olorun, Olofi) in Yoruba religion. Some of my Christian friends will be bothered by the Yoruba traditions, but a lifetime of reading comic books and listening to hip hop has taught me to be tolerant of other people's gods, and I actually know more than a couple Yoruba practitioners. They're a'ight by me. More important to me than the form of the religion he practices is the content of what Force of the Orisha brings to the album:
"You don't recognize but we arrived from the same source. Speak until my voice hoarse.
Been around the block once.
Same living forces that bump to make the South crunk..."
We are not alone. We can receive strength, power, and encouragement from our forebears, who have passed to us power from a divine source. Whether it is genetic, spiritual, or cultural, we have each inherited talent. With it we have also received purpose, the mandate to apply ourselves so that talent becomes skill, which properly and persistently applied yields victory.  With Force of the Orisha, Venomous is making a case for the spiritual source of that inheritance. 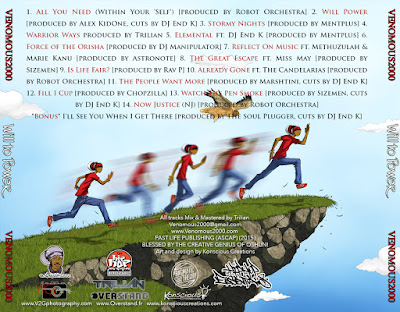 "It's easier to let it all go, But come time for harvest, I'ma reap what I sow…"
Anytime I want to review a record, I try to listen to the whole thing once before trying to talk about any tracks, so I can have a sense of how each song relates to the whole. That said, the hardest thing about reviewing this album was getting past The Great Escape, which is by far my favorite song of 2015 at this point.

I listen to a lot of music, but The Great Escape (which features Miss May on vocals and production by Sizemen) pushed all my buttons in one song. It's almost fatalistic about life's difficulty, but also transcendentally optimistic. It's deeply conscious, but sounds like a club banger. Your mom and nanna will like it, but so will you. If you pull up next to me in Dallas traffic, you will hear this blaring out my speakers.

The Great Escape is the indispensable track you need no matter what. The Great Escape has the combination of great execution, lyrical content, and marketable sound that is easy to recognize but not necessarily easy to duplicate. In short, this is a hit record waiting to happen. If you don't trust my recommendation to buy the whole album (which you should), PLEASE do yourself a favor and at least slide son a dollar for The Great Escape. If people actually bought real hip hop records, The Great Escape would be platinum, in the tradition of All I need, One More Chance, and If I Ruled The World. I ain't holding my breath for that, but I believe GhettoManga fans are real heads that support real shit. So click here to handle that. 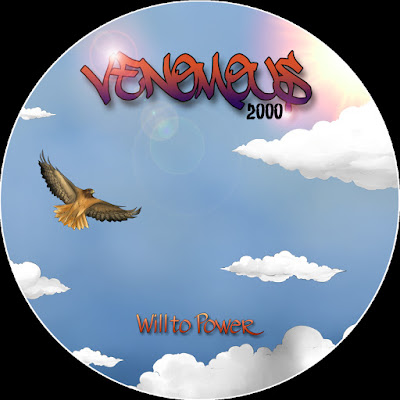 But like I was trying to say, I recommend buying the whole record. After I got done obsessing over The Great Escape and Force of the Orisha,I fell in love with other tracks like Stormy Nights, Elemental, and Watch the Pen Smoke where Venomous applies that Jersey open mouth flow and gift for wordplay to create. Speaking of Jersey, I also love Now Justice (NJ) where he reps the garden State proudly.

Venomous created Will to Power with the lofty goal of empowering each listener to take charge of his life and focus past just dreaming about doing big things, but to commit to the hard work of honing their latent ability into skill. Like Morpheus' red pill, Will to Power will wake you up to your mandate to live out your incredible potential.  Every element of the record is directed to this purpose, including the album visuals by Konscious Creations, the videos, all the production, the samples, and (of course) Venomous's rhymes. Whether the songs sound reflective, somber, upbeat, or cautionary, the core message is spelled out in the album's very first sentence:

"All you need is within yourself."

Samax Amen draws people, places and things for fun and profit. He is the artist of many great comics you never heard of like Herman Heed, Champion of Children, The Brother and The World As You Know It. He even writes and draws his own comics, like Dare: The Adventures of Darius Davidson, Spontaneous, and Manchild when he gets around to it. Because making comics is hard and stuff, he started GhettoManga as a blog in 2006 and as a print magazine in 2008.
GhettoManga.com
comics. hiphop. news. art. culture
edited by Samax @ 12:20 AM