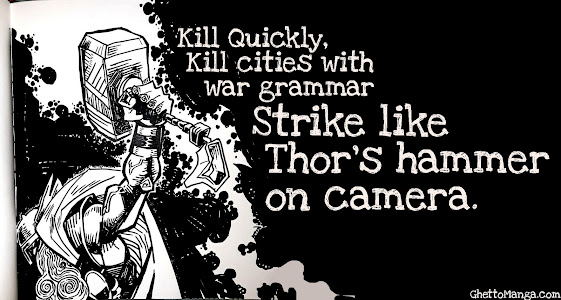 
‘Portals’ (iTunes Pre-Order): bit.ly/iTunesPortals Oftentimes, it’s the most understated touches that can have a lasting impact. Like the hints of psychedelia and otherworldly imagery that subtly appear throughout the video for “The Mystic,” the raw and haunting single from Brooklyn stalwart, U.G. Also known as one-half of the Cella Dwellas, the BK spitter has launched his campaign in support of his highly anticipated solo debut, Portals. And in doing so, he’s taking listeners and now viewers to another dimension with “The Mystic” video, which is produced by IDE, who also co-directed the video with Jise of The Arsonists fame. Together, IDE and Jise, along with special effects editor, Kenneth Shumaker of TimeBomb Pics, embrace the otherworldly vibes emanating from the track, while showcasing U.G. in his element—rapping his ass off wherever and whenever. They also enlisted a slew of like-minded individuals, such as Swave Sevah, Poison Pen, Dro Pesci, and IDE himself, who all make an appearance. The result is a viewing experience that’s both mind-bending but also very straight-up Hip-Hop, and that’s exactly what makes it so effective. Check out the visuals, and then head over to iTunes and pre-order U.G.’s long awaited debut, Portals, which drops Oct. 21 via Creative Juices Music. If you’d like to own the album in the physical form, head over to CreativeJuicesMusic.com, where you could also pre-order the ‘Portals Package Deal,’ for just $45 (refer to details below). Credits: • Artist: U.G. • Title: The Mystic • Produced by: IDE • Co Produced by: Warryn Syde • Directed by: IDE & Jise One • Editing and Special Effects by: Kenneth Shumaker of TimeBomb Pics • Album: Portals • Label: Creative Juices Music • Release Date: 10/21 'Buy The CD' ($12.99) [with Bonus cd and stickers] http://creativejuicesmusic.com/releas... ‘Portals Package Deal’ ($45): http://bit.ly/PortalsPackageDeal • CD • T-Shirt (Black or Grey) • Limited Edition Cassette Tape (Bonus Track “We Not Playing” ft. ILL Bill [revisited version]) • Sticker Package • Instrumental CD/Bonus Tracks • Poster signed by U.G. Press Release: http://bit.ly/PortalsPressRelease Tracklist: 01. Intro (The Material World) 02. The Mystic (feat. Mista Sinista) 03. Broken Vessel (feat. DJ White Shadow) 04. Super Gods (feat. DJ White Shadow) 05. You Already Snow (feat. Celph Titled) 06. Megatron 07. Might & Magic 08. Interlude 09. Mind Right 10. Light Years (feat. Life Long) 11. Portals (feat. Mista Sinista) 12. Mosh To This (feat. Necro) 13. Ready For War (feat. Mista Sinista) 14. The Portals Closing **Arranged, Mixed and Produced by: IDE *** Additional production from: Kelly Finnigan, Warryn Syde, and Time Timebomb Pics Twitter: • U.G.: https://twitter.com/therealug • IDE: https://twitter.com/IDE1043 • Creative Juices Music: https://twitter.com/CJMHipHop Creative Juices Music: • Website: http://creativejuicesmusic.com • Facebook: https://www.facebook.com/cjmhiphop • Instagram: https://www.instagram.com/cjmhiphop ℗ 2016 Creative Juices Music. All Rights Reserved. Unauthorized duplication is a violation of applicable laws.

Dope.
For the record, I said "Transvessels" instead of "strange vessels".  The first time U.G. corrected me I didn't know you could edit comments.  But then he corrected me again today.
And I fixed it.

I know that Transvessels doesn't really mean anything, but I have a record for getting rap lyrics wrong.  As I get older, I am able to admit that without being embarrassed.
I get excited sometimes.
The Mystic is PACKED with comics references (as well as a reference to the Will Smith superhero movie Hancock).  Everyone knows I'm a silly sucker for comics references in legit street rap lyrics...
Anyways, I photoshopped some lyrics on this drawing of Thor from my sketchbook before I realized he probably said "poor grammar" not "war grammar"...
U.G. didn't correct me on that part, though.  Maybe he liked "war grammar" better?
Maybe not.
And so... I included the sales pitch above so you can cop U.G.'s solo album Portals. Yeah, I'm late, but I hear that's better than never. 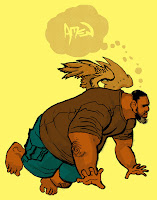