I'm not the only one geeking about the Adult Swim (aka Cartoon Network After Dark) launch of the animated adventures of former CIA agent and full time righteous brotha Black Dynamite, but I'm happy to take my place in the chorus of voices. Here's a Black Dynamite promo video I copped from the Adult Swim Website... 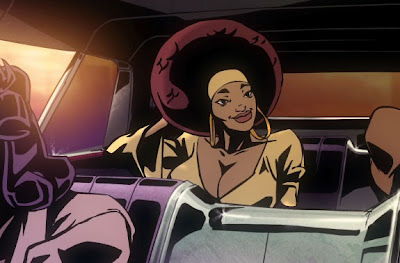 (The part where Honey Bee pulls the ninja stars out had me dyin'...)
I've been focusing my chi to remain patient for the animated release of Black Dynamite, which is sceduled for 2012, so it was good to hear that Adult Swim's dropping the pilot on the website next month. 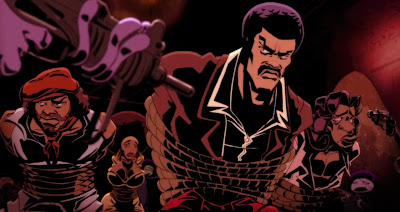 I gotta give props to the fine folks at Ars Nova, the owners of the intellectual property rights to Black Dynamite's exploits, because they are one of the only production companies that takes full advantage of a cool concept, dropping flames from the sky in every medium they can, the way it should be! No sooner had the blaxploitation action comedy classic kung-fu-kicked it's way into theaters than the rumors of the animated show surfaced, and before I knew anything, word of the comic were floating too (PLEASE tell me you got your copy of Black Dynamite: Slave Island...). And we don't even NEED anyone to tell us that there is talk of a sequel, do we? I mean THAT'S a given!
Let's hope the good times continue to roll! I mean, I know I need more Black Dynamite comics, DVDs, video games and other assorted what-not in my life... Who doesn't?! So anyways, let's crash the Adult Swim servers with record-levels of traffic when that pilot drops August 8th.
holla!

My jaw literally dropped open and was held there by the sheer awesomeness.

The animation looks really good, too and that's important. It wouldn't be near as cool if it was all like Archer.

Man. Like Doctor Who, I've just got to wait for the DVDs

I hear you... at least you'll be able to watch the pilot online, right?