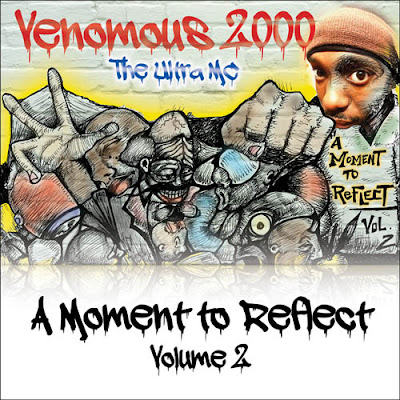 If you're listening to wack music, it's kind of your own fault. I mean, there are cats out there who are virtually unknown putting it down extra hard. Let's start with The Most Efficient, a banging posse cut off that dude Venomous2000's new album. Press play and get ready to meet at least one of your new favorite emcees...

yep. That's quality rhyming, fammo! Venomous2000's got a 31 track compilation out called A Moment to Reflect Volume 2. This song features Venomous longside CyMarshall Law, John Robinson, El Da Sensei on a beat by Sci Fi Stu and cuts by DJ Priority. The Most Efficient exemplifies the spirit of A Moment to Reflect Volume 2, which has mad guest appearances including Inspectah Deck, John Robinson, Rhymageddon, RealEyez Mystic, Nite, Nalm Myerz, L.I.F.E.LONG, and other dope emcees you never heard of, but Venomous2000 drops plenty tracks where you get to hear him rock solo like Drop of Venom, We Call Them Emcees and It's On Tonight. 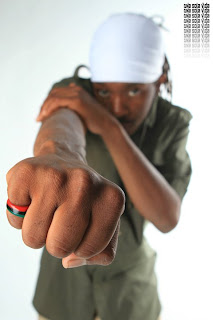 Often, when cats drop albums with mad posse joints, it's because they aren't confident of their own rhyming abilities (and rightly so), but I don't think this is the case with Venomous... I think the dude just wants to share! With tracks on it that span different subject matter and musical sounds (on tracks of his own as well as beats by Dibiase, DefDom, SciFi Stu, Cheese Maker Productions, DJ Priority, DJ MentPlus, Nemisis, DJ Irs, DJ Hamma, Heartbeat Da Producer, DJ Mishap, Kid Konnect & more), this album will introduce you to a cat who loves hip hop and enjoys writing, vibing and rhyming his fellow heads.
"I define myself as a humble student of the art..." he says.
"Peace to Everyone that allowed me to express and share music with them! I TRULY appreciate the blessing that you are in the Universe. Continue building, and I will be doing the same..."
Fans who popped their cherry listening to Native Tongues, the Pharcyde or Hiero will feel right at home with this album. It's a steal at $10.99 for which they'll get two albums worth of songs, free download of these three videos, and a grocery list of new emcees to check into. Which is not to say that it sounds dated, but dope rhyming isn't exactly in style, is it? You don't need to trust me though (but why wouldn't you?)...
Since you made it down this far, stream  A Moment to Reflect Volume 2 for free right'chere via the magic of bandcamp. It's an easy bet that the rap nerd in you will like enough of the tracks to justify paying for it...so tell that cute co-worker you like that you'll pass on the matinee showing of The Help 'cause you gotta cop some fly underground shit (bad asses get all the love, trust me...) and click here to cop A Moment to Reflect Volume 2!
holla!
samax.
ghettoManga.com
comics. hiphop. news. art. culture
edited by Samax @ 8:23 AM

Yooooooooo, it's like in the 90's they froze them in a block of ice and thawed them out today to save Hippity hop!

John Robinson is my dude! Science of Life was my shit.

Yup. and there's tons of this stuff out there! At some point, 1994 became a genre! woo-hoo!