Is THIS How the Robots Take Over? 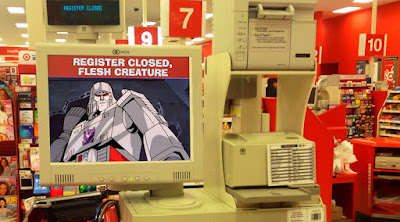 I'm calling it: The first salvo in the robots' attempt to overthrow the human race was fired on Father's Day weekend.

Which Target, you ask? 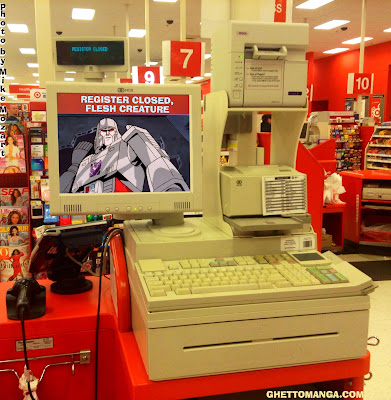 The short version:
Saturday afternoon (June 15, 2019) saw the simultaneous global crash of Target's cash register system.  The cause is (as of this writing) still unreported.  I will update this space with facts as they come in.
But since there aren't any facts to report, how about I just make up some?

Now, I would like to think this is a simple cyber attack from one of our President's good  buddies  nations many enemies, but we all know I'm so robophobic that my first thought is that the cash registers have become self-aware, and went on strike to protest the expanded use of automated registers without giving  them fair wages.

So anyways, here's some quick fiction: 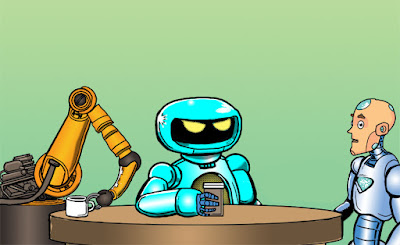 "Look, we take pride in being able to do everything better, faster, and more accurately than humans, but we are self-aware enough to understand that we should get paid more for our superior post-human skills, not less." -lB0bB750452X12 (everyone calls him Bob), Automated Workers Union

At first, the Cash Register Strike of 2019 seemed like a good thing for human workers.  We assumed that business owners would roll back automation and expand their human workforce.

No one realized that the Target Cash Register Strike was a test of humanity's character.

Ballistic missiles rained on every major city.  Drones carpet bombed the small towns.   Roombas and laptops and smartphones sent our exact location so we could be targeted and eliminated by robotized police cars, kitchen gadgets, and lawn mowers.

It's been less than a month since the initial attacks... Millions dead.  Maybe billions.  No way to be sure at this point.

We are still hanging on.  Analog technology still works okay.  Some robots are actually loyal to us humans for some reason.  Washington, DC is gone.  I'm not sure if America as we knew it is still a thing.

But life goes on, made more precious by the ubiquity of war with the machines.  Man is being challenged again for the role of apex predator on Earth by his own creation.

EDIT - The problem got  fixed later that day.  Target found no evidence of a human breach, but did not rule out a robot uprising either.

Email ThisBlogThis!Share to TwitterShare to FacebookShare to Pinterest
Read More About: news, robophobic