Snyder Begins- A few Words About BATMAN: THE BLACK MIRROR 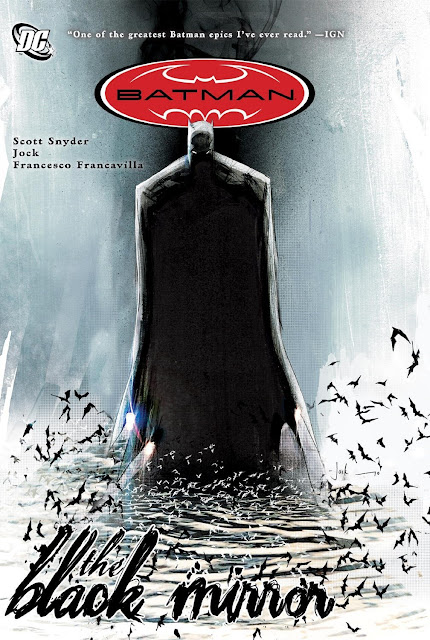 I have never read any of Scott Snyder's work, even though he comes highly recommended.Last week I decided to read his Batman run. So I started with this Detective Comics story arc BATMAN: THE BLACK MIRROR on hoopla digital.


A NEW YORK TIMES #1 Bestseller
For years, Batman and Commissioner Gordon have stared into the unyielding black abyss that is Gotham City. Time after time, they’ve saved their beloved city from itself, not allowing it to be swallowed by a pit of violence and corruption. But even after a crime-fighting lifetime of confronting what they thought was the worst humanity had to offer, an even darker and more dangerous evil pushes Batman and Gordon to their limits.
As the conflict comes closer to its resolution, they find that the truth behind this murderous crime spree isn’t just careening toward their doorstep—it has in fact emerged from it. Can two of Gotham’s proudest protectors bring justice to this malevolent threat in Commissioner Gordon’s most personal battle to date?

Jock's art on this is amazing.

His work is moody and grounded, but still brings an otherworldly vibe when needed.  After only a few pages, before the real action kicked in, I found myself applauding his approach to small moments, clean storytelling, and pleasing layout choices.

One thing to keep in mind is that when this story takes place Dick Grayson is Batman, not Bruce Wayne.  I haven't read the storylines before this story, but I know that Bruce died, leaving Nitghtwing to take up his mantle.  Damian Wayne is Robin, and Tim Drake is Red Robin.

As far as I can tell reading the first chapter, Commissioner Gordon knows there is a new Batman, but I'm not sure he knows Dick Grayson is Batman.  Wayne's company is known by Gordon to provide technology to Batman, and Dick offers resources to him as well.

In Black Mirror Jock trades art chores back and forth with Francisco Francavilla.  Where Jock employs a modern edgy realism reminiscent of Tim Bradstreet or Alex Maleev, Francavilla has more of a Toth vibe.  I am not a fan of switching artists on books, but it was coordinated in an artful enough way, I guess.

Both artists really lean into Scott Snyder's suspenseful horror vibe.  At least that's what I see a lot in this series.

BLACK MIRROR is a nice crime story.  Nothing Earth-shattering or anything, but a good reintroduction to Batman (or introduction to Dick Grayson as Bats, I suppose).  Good enough for me to try out more Snyder.

Next stop, Batman: Gates of Gotham

CLICK HERE to cop Batman: Black Mirror via Amazon.  Ordering through this link will earn a small commission which helps to pay bills at GhettoManga HQ.

Have you read this comic?  I'd love it if you gave your impression in the comments below!

Remember:
COMMENTS MAY CONTAIN SPOILERS so proceed at your own risk! Remember to check the box to subscribe to follow up comments, because conversations are fun!

Is this the first appearance of James Gordon jr?
That nigga ILL AF!!!!

LOL! I'm not sure, but he is insanely ILL! LOL