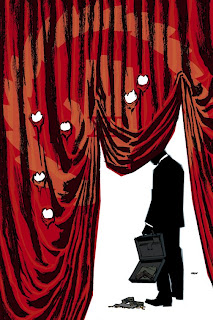 One of the most critically acclaimed comics of the decade is ending in early 2009. i'm speaking of 100 Bullets- the conspiracy theory laden ensemble crime drama written by Brian Azzarello and brilliantly drawn by Eduardo Risso- that will see issue #98 hit stores from the grassy knoll this wednesday, is ending with issue 100, which will likely drop in the spring.
the book that started as a seemingly harmless and unrelated series of revenge tales has grown into a serpentine plot dating back before the founding of these United States of America. Now, the endgame is on, and promises to be hot! Peep these covers so you won't miss it on the racks...
uno.
-gM
gift ideas! cop one of these 100 Bullets TPBs at Amazon.com!

This is the comic that renewed my interest in comics. All good things come to an end. It's good that they're ending the story because some stories just drag forever and ever and ever. From what I understand many manga tales simply end.

If there was ever a series that can be translated films, this is it.

The final question is what would you do if Mr. Graves handed you the briefcase?

no question:
if it was ME, some people would get BLASTED!