remember when Indie comics were totally different from mainstream stuff? these days, you see a lotta the same stuff in independents that you see at Marvel and DC. that's not always the case though... for example, if you cross Sin City with Powers, take out all the good guys, and crank the profanity, sex and violence up a few knotches... you might be ready for Olde Towne Comix, and its flagship title Abusilum. the series' star Eli Flythe hates his job as an extractor — a polite way of saying he tortures suspects for information needed to solve life or death police investigations- but boy, is he good at it!

the pleasantly humble-yet-ambitious writer-artist-colorist-creator John Aston has been tweaking these characters for years, and it shows... Abusilum's constantly expanding cast of crooked cops, hired killers, and assorted violent sex-offenders are just bursting with personality. the story is sometimes overwhelmed by Aston's love of filthy dialogue and even filthier situations, but it still works by exploiting this energetic juxtaposition of sex and violence.

Aston has a fun, imperfect drawing style, made more impressive by his use of color and design. and he seems to be building a nice (well maybe nice isn't the right word...) little universe in Olde Towne. the three issues of Abusilum comprise an evolving plot, but i was really blown away by the one-shot Queenie, one woman's story of love, crime, and murder. and if that wasn't enough, the recently launched new webcomic Rachel Rage must be aimed directly at me, because it stars a big-boned sista with afro-puffs and attitude straight outta blaxploitation movies! 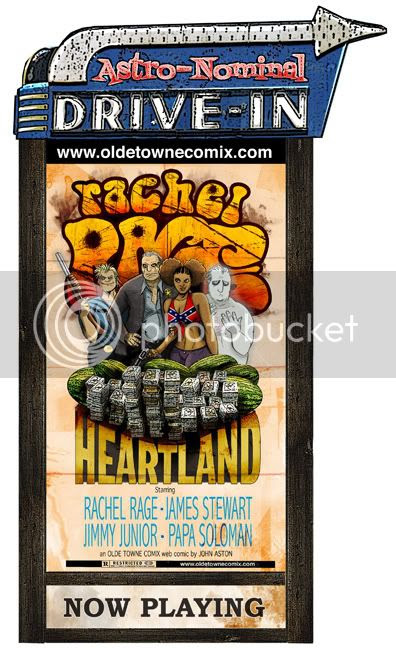 plans to collect Rachel Rage for print have me all excited, but for now i'm content to plow through his webcomic periodically! but don't take my word for it! sample Aston's work on mySpace, then visit OldeTowneComix.com.
and bring a drop cloth... it can get messy!
uno.
gM

Aston and I are buddies at Myspace and you can tell that he roasts it way way dark.

word.
he's definitely onto something!