the OTHER dynamic duo joining the cast of Iron Man? 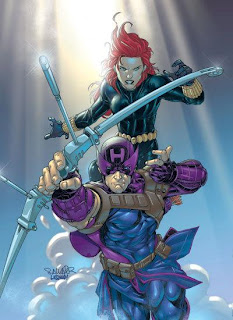 word has it Hawkeye and Black Widow will be appearing in Iron Man 2, and if that doesn't make you geek out, you clearly haven't read The Ultimates, where Mark Millar and Bryan Hitch made the duo look like Neo and Trinity! in this version of the Avengers, Nick Fury uses Clint and Natasha as a secret black ops team that shoots first and asks questions later, if at all! they pretty much take out a whole building full of office workers (you later find out they were world-conquering aliens in disguise... but they were just as dead!) on their own, in a hail of arrows and bullets that has to be seen to be believed!
-gM
edited by Samax @ 12:03 AM

For Avengers it's only right.
They'll most likely be special ops

Yeah, I'm hoping they go with the Ultimates version of Clint and Natasha. It makes sense since Sam Jackson is playing Nick Fury.

I think they need to change Hawkeyes choice of weapons, who the hell uses a bow an arrow for anything but hunting?

Man Rambo that Lord of the Rings Elf. Besides bow and arrow is silent like knives. If he's precision with it it really won't matter, you're still dead.

Hawkeye's appeal is the bow and arrows. otherwise, just use somebody else! seriously dude... you need to read that story by Millar and Hitch... Hawkeye was born again hard! i'ma hafta find those issues and upload the pages or something...