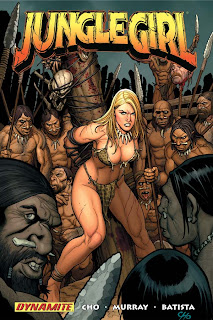 that dude Frank Cho has a hardcover dropping called Jungle Girl:Season 1. collecting the series from Dynamite.
the sales pitch:
"infused with everything Cho fans want to see - beautiful women, thrilling adventures, and, of course, dinosaurs... Jana the Jungle Girl races to save a group of intruders into this strange land - a land filled with dinosaurs, prehistoric men and much, much more! Each issue reveals more clues about the nature of Jana, and of the island itself... Featuring a cover by Cho, this hardcover collection features issues 0-5 of the series along with a complete cover gallery featuring the art of Cho and Batista along with sketchbook material from Batista... "click the pic to read the first chapter for free, you lucky dog! you can order the hardcover on Amazon.com (here)