Santa Claws is a little late... 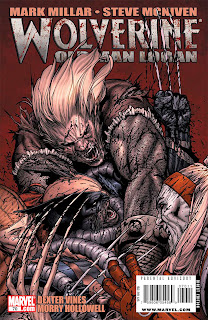 but better late than never, right?
okay, lame Christmas jokes aside, Wolverine is shifting into high-profile in preparation for that movie he got comin' out in OH NUEVE (are YOU the last person not to see that new trailer? peep it here... y'welcome), Marvel got mad attention on Logan, includin' superstar creative team of Mark Millar and Steve Mcniven (Civil War) on the killer canadian's book craftin' his future history! here's the sales pitch: Fifty years ago the heroes of the Marvel Universe were massacred and as far as Old Man Logan is concerned, WOLVERINE died with them. During that final battle, something happened to Logan…something so traumatic that he hasn’t popped his claws since. Now Logan lives out his days a shell of a man, his warrior spirit long since crushed by the horrible weight of the secret he carries with him. What happened? Finally, the darkest chapter in Logan’s history can be told! MARK MILLAR and STEVE MCNIVEN’s character defining run continues!
Click the cover above for a preview of the January issue, a flashback to Wolverine's Final Battle... or click the cover below to sample Wolverine: Old Man Logan pt 1. 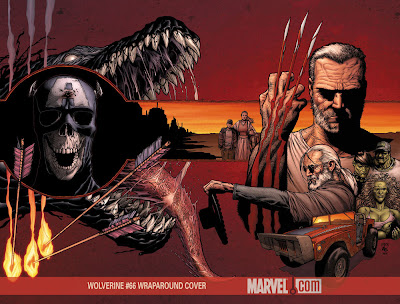 the way this is starting, it seems like Wolverine sent old school buckwild like he used to.

nah, it's a flashback.