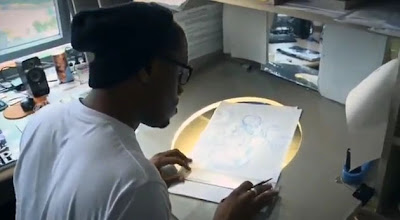 This week, the fine folks at Creative Control finally debuted their documentary series Seoul Sessions, starring that dude LeSean Thomas, teevee animation Producer/Director on shows such as The Boondocks, The Legend of Korra, and Adult Swim's upcoming joint Black Dynamite: The Animated Series. Peep the first episode below as LeSean explains why he moved to South Korea, and how he acclimated himself to a new language and culture...


LeSean is a seriously inspiring dude, and as always he drops mad jewels, probably without even realizing it. He's super confident, and has the talent, drive and work ethic to back it up. A lot of dudes talk noise, but he has a resume that makes a documentary like this a must-see. Anyways, the next episode of Seoul Sessions drops June 30th, tough guy!
See ya then!
-samax.
ghettoManga.com
comics. hiphop. news. art. culture
edited by Samax @ 3:20 PM

I have so much respect for Lesean for this. Takes balls to make a power move like that. Bravo!

Extremely impressive. This brother is a true role model. They should show this in schools all over the hood. Just so kids can know what you can achieve when you're willing to learn.