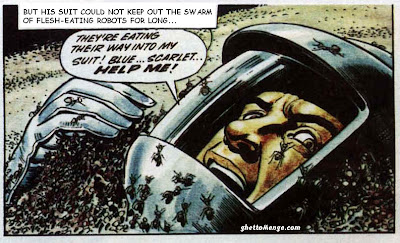 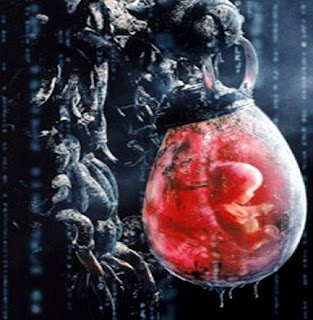 because The Matrix did not scare the government enough, Pentagon contractors are working on steam-powered robots that could fuel themselves not on living humans' body heat like Smith an'em, but by eating our dead tissue. The EATRobot lives by gobbling up whatever "organic material" it can find — grass, wood, old furniture, or the flesh of the nonbelievers.
Robotic Technology Inc.'s Energetically Autonomous Tactical Robot "can find, ingest, and extract energy from biomass in the environment (and other organically-based energy sources), as well as use conventional and alternative fuels (such as gasoline, heavy fuel, kerosene, diesel, propane, coal, cooking oil, and solar) when suitable," according to their Web site. 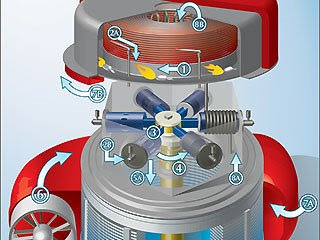 now "Biomass" can mean plants and stuff, but these are not vegan robots... so they could eat animal mass too, including human corpses which would be plentiful in a war zone.
EATR will be powered by a "Waste Heat Engine" which uses an "external combustion chamber" burning up fuel to heat up water in a closed loop, generating electricity. the advantage (or disadvantage, depending on how you look at it) is a highly flexible and autonomous robot that could roam on its own for months, even years! it would not need to return for fuel or service if properly designed, and could be built in many configurations for just about any purpose. 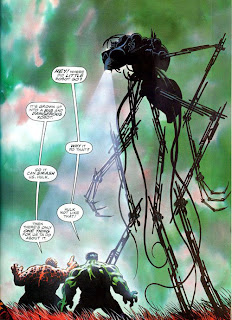 Robotic Technology presents EATR as a harmless and helpful li'l artificial creature... but how long before militarization, misuse, or good old rogue artificial intelligence turns 'em into flesh-eating killing machines that view an unprotected elementary school like your moms at a chinese buffet? you think Al' Qeida is scary? what about soldiers with iron teeth and rail guns that eat the corpses of their enemies? no remorse, no pity, no need to rest or refuel. yay, technology! we are probably looking at the infancy of a new arms race. like Transformers, except Megatron doesn't want energion cubes or the All-spark, he wants to eat the President's heart on live television. congratulations, Mr. Obama... and don't worry, we got your back (waaay back!)
holla!
-samax
ghettoManga.com
comics.hipHop.news.art.culture
edited by Samax @ 4:24 PM

Sounds like Skynet and the Matrix had a baby!

The ways in which this robot project could go wrong are innumerable. Sci Fi films and books are just for entertainment eh? Not cautionary tales. *SMH*

as soon as it says ".45 long slide with laser sighting" you can count my ass out.