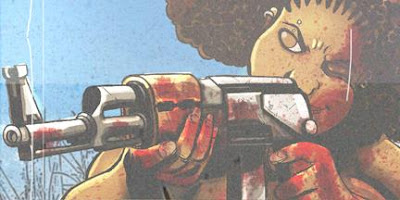 i got my copy of Rachel Rage:Heartland a couple weeks ago. everybody who's been reading this blog for a while has heard me go on and on about my anticipation of this blaxploitation-inspired tale by a creator who spells Revenge with a capital R (namely John Aston of OldeTowneComix). The ballsy grindhouse writer/artist was about as vulgar, lusty and violent as you can get in his previous book Abusilum, and for Rachel Rage he doesn't take his foot of the gas, he puts the pedal to the metal... 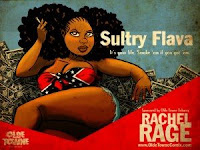 unlike a lot of indy guys, John understands what makes indies important to the artform and industry of comics. he makes a book that would not, and probably COULD NOT, be published at a major company or created by anyone else. Rachel Rage is not a parody of, or even a comment on the blaxploitation genre. it comes off like he was so affected by Pam Grier's body (of work i mean!) that it was only a matter of time before this book came out. not much time at all actually, as he wrote, drew, colored and lettered 176 pages of story in less than 8 months (a Herculean feat, i can tell you!). while i will not be so pretentious to suggest that he created an original book, i can easily promise you it is authentic. it's a comic that he made because he wanted to read it. 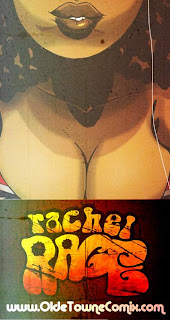 i can safely recommend Rachel Rage:Heartland to anybody that likes great crime stories, sexy revenge tales, or just wants to see a pecan-colored southern brickhouse chick totin' an AK-47 (who wouldn't!). You can order it in black and white on some recession-proof isht, or spend a few more bucks for the color joint with all the extra bells and whistles like i did (the "Junk in the Trunk" section has deleted scenes, promo artwork and other sweet stuff to go with your pecan pie!). either way, Rachel Rage:Heartland is on the summer's short list of things you gotta get by any means necessary.
holla!
-samax
ghettoManga.com
comics.hipHop.news.art.culture
edited by Samax @ 1:16 PM

I think he did a pretty good job of it. I'm waiting for the upcoming sequel, SHORT TIME WOMAN.

Wait till you see what's coming...

word. i'm trying to get the word out on this. people need to see tha new stuff people are doing out here!